Pirates at the Orange Tree

Thursday was my last day at work before Christmas and my last trip to the theatre of 2006. Lisa and I made the trek out to Richmond (trek is perhaps overstating a 15 minute train journey, but hell, it was cold, really cold) to see the Orange Tree's festive staging of Chris Monks' The Pirates Of Penzance. And it was worth the trip. Monks' production rejigs the Gilbert and Sullivan classic to included black-suited wiseguys and abseiling posh girls, a wonderfully myopic heroine and a Major General in a wetsuit and flippers. Preposterous, yes, but fantastic fun. The production had a delightfully ramshackle quality - it was silly, sweet and didn't outstay its welcome. The perfect way to round up my theatrical year.
Posted by Interval Drinks at 7:37 AM 1 comment:

Much Ado about Something 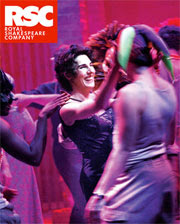 It’s mid December and, along with Christms present panic (two weeks to go and shamefully little done), come those inevitable end-of-year round-ups in the papers, all the critics busy picking their best plays and whatnot, summarising a year’s worth of theatre in a few snappy paragraphs.

I’m not sure I like the process - though I read them all of course, I always read them – it seems to leave little room for the plays that moved you on some level but that might not have been the most polished or successful of productions, the interesting failures, the guilty pleasures. So I’m not going to inflict my top five on you here, (not yet anyway – I may cave). Having said that, the play I saw last night may well be a candidate for such a theoretical list. I was at the lavishly revamped Novello for the opening of the London transfer of the RSC’s Much Ado About Nothing. Being one of about three people in the UK who found Green Wing terminally unamusing (all those little speeded up bits did nothing to make it any funnier) I wasn’t overly thrilled at the casting of the angular Tamsin Grieg as Beatrice, but though I thought she overplayed wildly at times, she gradually won me over. As did the entire production. Set in pre-revolutionary Cuba, Marianne Elliot’s production was a wonderful, uplifting affair, full of music and dance, and brilliantly performed - especially, I thought, by Patrick Robinson as the Prince, an actor I first saw on stage some ten years ago when my A Level class went to see a touring production of The Country Wife at Woking Theatre. (Christ, my A Levels were ten years ago? Now I feel old).

All of the supporting cast were excellent and were it not for the large gentleman in the seat next to mine who slept (and snored) pretty much through the entirety of the first act, it would have been almost perfect. Still, it was definitely the best Shakespeare production I’ve seen this year.
Posted by Interval Drinks at 9:10 AM 1 comment:

A Dark Night at the National 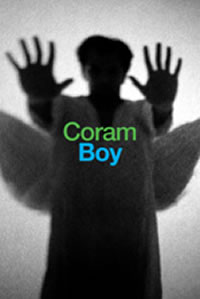 Have decided my failure to engage with Love Song last week was a 50/50 split between my bad mood and the play’s inherent not-very-goodness. Because, despite the persistence of a certain sense of malaise throughout the remainder of the week, I found myself really enjoying Coram Boy at the National on Friday.

Melly Still’s production is an incredibly dark piece of theatre: dead babies and onstage birth, child trafficking and hard-hearted fathers, yet it somehow works as a family-targeted show (though certainly not for very small kids). Lisa loathed it last year, when it first played at the National, and even I shuddered slightly when they started producing little baby skeletons from the floor, but the plot drags you along and the sheer bombast of the play keeps you hooked. I found myself all tense and trembling during the end of the second half and all the people around me seemed rapt. (Except for the two women sitting directly beside me, who though they seemed to be enjoying it, felt the need to discuss every plot point in some detail, with only vaguely lowered voices; it was as if they were watching television in their own living room, no acknowledgement of the people around them who might not want each dramatic exchange pointlessly reiterated and in case you haven’t gathered, it was very, very annoying).
Posted by Interval Drinks at 4:35 AM No comments: 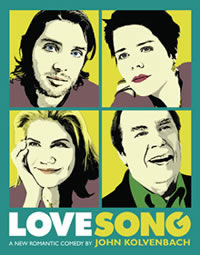 I’ve written before about how very often I arrive at the theatre, tired and in a flap and not really in the mood for engaging my brain with anything, but then I take my seat and the lights dim and slowly I’m swept up in another world. All the stresses of the day fade into the background. It doesn’t always happen of course, it takes a certain kind of production I guess, something in tune with what you’re feeling; but last night was the first time I can think of when quite the opposite has occurred. I had tickets for Love Song at the New Ambassadors, John Kolvenbach’s quirky, (kind of) romantic comedy, starring Neve Campbell and Cillian Murphy.

I’d heard mixed things, but was eager to see it – to make up my own mind. The play focuses on Murphy’s loner Beane, an extremely introverted character whose life is opened up by Neve Campbell’s urban ‘liberator’ – a kind of cat burglar on a moral mission, who steals his only spoon. Everything was so determinedly offbeat, and while I could see how some would find it sweet and charming, I just found myself sinking deeper into my seat until, by the end, I was enveloped in some dark malaise of my own making – unmoved and actually a little dejected. This wasn’t completely a result of the play itself which was often very funny in places – but I think you had to be in the right frame of mind to appreciate it and for whatever reason I just wasn’t. I found it overly whimsical and quite the opposite of uplifting. Indeed I scowled all the way to Waterloo. Go figure.
Posted by Interval Drinks at 5:11 AM 2 comments: