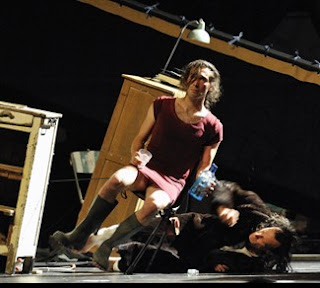 It begins with a crash. A spotlight smashes down from above, narrowly missing a performer. Created by Camille Boitel, L’immediat presents a world where things tumble and buckle and crumble with regularity; where nothing is fixed, nothing safe.

The opening skit is recognisably domestic. A woman arrives home from work. As she starts to unpack, first the table, then the bed, and then the entire room start to fall apart around her. Chunks of wall start to collapse. The table concertinas into a pile of wooden slats: even her trousers are disobedient, ending up around her ankles. It’s farcical and ingeniously choreographed, yet also melancholic, shoulder-shrugging, resigned to chaos and upset.

Then the whole stage starts to unpick itself, coming undone like a game of Mousetrap in reverse. Towers of cardboard boxes fall to earth, the lighting rig plummets, the stage becomes a sea of things: clutter, mess to be swept away. It’s astonishing to watch, heart-in-mouth stuff, at times seemingly perilous, as the Barbican stage is slowly stripped bare. In such moments the piece achieves a glorious union between the choreographically audacious and the thematically potent: nothing is solid, nothing is steady; if you lean on something it will only collapse under your weight.

It’s a hard balance to sustain and the production doesn’t manage it, though nor does it seem to try to. Subsequent sequences involve limbs which seem to rebel against their owners and even the stage seems to sway like a ship at sea, a pinball world on permanent tilt. Eerie dissonant sounds spill from some corner of the stage, cracked and fractured, a needle stuck in its groove. The performers, rendered bear-like and genderless under heavy fur coats hop in and out of hungry wardrobes; they writhe and wriggle on their bellies, they bend in odd, improbable ways.

These later scenes have a faintly post-apocalyptic whiff: after the fall, comes the levelling. The performers scrabble around the stage, stuck, repeating the same sets of movements. Sometimes they are ambushed by furniture; one woman seems in danger of floating away entirely and needs to be physically held down, grounded.

There’s wit and brilliance in much of this, particularly in the pervading sense of chaos and decay that, by necessity, must require a huge degree of precision and care to pull off. But the production seems to sail past a number of possible end points, galloping onwards but never quite replicating the gleeful, gasp-inducing effectiveness of that first scene of collapse. Running gags are overused with a sense of diminishing returns (there’s only so many times a startled man leaping out of a wardrobe can raise a smile) and though Boitel skilfully knits the philosophic with the farcical, there’s a – perhaps apt – sense of burnout before the piece is through.
Part of the London International Mime Festival. Reviewed for Exeunt.
Posted by Interval Drinks at 8:55 AM No comments:

Lovesong at the Lyric Hammersmith 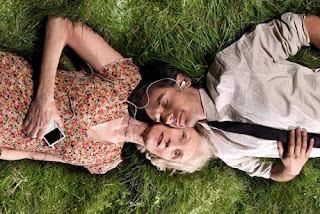 It’s a strange sound: the damp rabbity snuffling of a roomful of people attempting to hold back tears. It’s a sound that runs through much of Frantic Assembly’s moving new production, twining with the music: Abi Morgan’s play is often incredibly tender and touching, but there are times when it feels a bit mechanical in its methods, a little too insistent on making the audience weep.

As a screen writer, Morgan’s work includes both Steve McQueen’s Shame and recent Thatcher biopic, The Iron Lady, and – political subject matter aside – her latest work for the stage shares some common ground with the latter film in its delicate exploration on the erosion of aging.

A married couple, Margaret and William, are shown at two points in their life: in the early years of their marriage, after their emigration to the US, and in what turns out to be their last days together. The optimism of youth slowly seeps out of them as life’s many small disappointments take their toll. Their new life in America isn’t as glittering as they’d hoped and though they both want to have children, they never come. Margaret takes a job, against her husband’s wishes, and both of them toy with the idea of having affairs. These scenes are interlaced with those of them at a later point of their lives. The elder Margaret and William have led a comfortable, if childless, existence, have come to terms with the hand that has been dealt to them and now face the prospect of life without one another

Some of the most piercing moments are wordless. Frantic Assembly’s Scott Graham and Steven Hoggett allow the couples to catch glimpses of each other across time. Siân Phillips, who plays the elderly Margaret, is shown dancing with Edward Bennett, her husband as he once was, bearing each other’s weight and leaning into one another. The four performers, pyjama-clad, tumble in and out of each other’s grasp; clasping each other, clinging to each other, but unable to hold on for long.

The cast all give well-judged performances even if the script doesn’t give Bennett and Leanne Rowe, as the younger Margaret, quite as much to work with. Philips’s performance is the most wrenching; at one point she is shown trying on a pair of once-treasured shoes, but she’s unable to walk in them and the frustration and anger she feels at her frail and disloyal body is painful to watch. Sam Cox, in comparison, exercises admirable restraint as the older William making his moments of emotional eruption all the more potent.

This is a production that walks a very fine line. Inevitably, given the subject matter, it has the capacity to tap into people’s personal experiences of loss and there are times when it feels too overt in its manipulation of the audience’s emotions. It deals unashamedly in sentiment and at times can feel a little thematically overcooked: there’s a lot of talk of dead things, ancient cave paintings and the linearity, or otherwise, of time. The movement sequences too, while beautifully executed, are occasionally distracting. The piece is at its strongest as a portrait of the way in which a relationship evolves over the years. The older Margaret and William have come to know each other’s habits intimately. The sense of familiarity which the younger William saw as a source of suffocation has become a comfort. These two people have reached a point in their lives when they have only each other – and now they must prepare themselves to part.
Reviewed for Exeunt
Posted by Interval Drinks at 10:48 AM No comments: 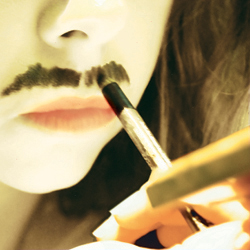 In a scene, perhaps not owing overmuch to Shakespeare but none the worse for it, Orsino and his courtiers are first glimpsed hanging out together in a sauna clad only in white towels, while a disguised Viola hovers amongst them, shifting from foot to foot, fully (cross-)dressed and uncertain where to look. Before she can make her departure, she even receives an unexpected glimpse of her master’s assets which makes her go as pink as the polo shirt she now sports as Cesario.

It’s one of many playful and inventive touches in Faction Theatre’s hugely endearing production of Shakespeare’s comedy, the first in an ambitious repertory season that also includes Schiller’s Mary Stuart and Strindberg’s Miss Julie.

The company previously tackled the play in 2009 and many of the same cast return, albeit in different roles. Stripping the performance space back to a bare black box and using hardly any props, Mark Leipacher’s production has a pleasing visual unity: the eleven-strong company come together to create the box tree behind which Sir Toby Belch and Sir Andrew Aguecheek conceal themselves, their fingers fanning like branches gently blown by the breeze; they also become the waves which wash Viola and Sebastian onto Illyria’s shores and, in a particularly chilling touch, they crowd together to create the oubliette within which Malvolio is confined, their seemingly disembodied hands curling around his body and pressing against his face, creating an intense sensation of claustrophobia.

Gareth Fordred’s militaristic Malvolio stands out among a capable ensemble cast. He wears his hair greasily slicked to one side and his leg in a calliper, which brings an extra degree of rigidity to his movements and manner and makes the moment when he believes Olivia has praised his gait feel all the more cruel. His bug-eyed, manic delight on receiving this misleading epistle is quite wrenching to watch and, dignity swiftly abandoned, he all but treads on the front row’s toes as he gleefully recalls each one her compliments; as a result his later, hobbling humiliation is all the more piercing.

As Belch and Aguecheek, Richard Delaney and Jonny McPherson transcend their respective moustaches (one sports a ratty Chaplin toothbrush, the other the salt-and-pepper lip-wig of a gouty colonel) to form a lively double-act. The production also neatly conveys the sense that these men, and Malvolio too, are veterans of a past conflict. Derval Mellett’s Olivia revels in her post-coital undoing at the hands of Sebastian, switching the black of mourning for something more vibrant with almost unseemly haste, her hair tumbling around her shoulders and her eyes brimming with bedroom heat. In comparison Kate Sawyer makes a rather understated Viola and appears as bemused and alarmed by Olivia’s advances towards her as by Aguecheek’s wobbly attempt to engage her in a duel. Lachlan McCall’s Feste brings a contemporary freshness to the play’s songs, plucking them out on his banjo.

There’s an occasional roughness to the verse speaking, and the odd dropped line, but this economical, intelligent take on the play doesn’t suffer for it. Indeed the rawness helps the audience to connect with the text and to get swept up in the plight of the characters. Through the company’s easy, relaxed way with the play – and the simple fanning of hands – a door is opened and you are invited in.

Reviewed for Exeunt
Posted by Interval Drinks at 1:01 PM No comments: