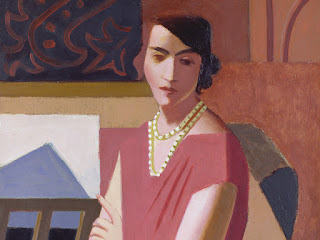 Githa Sowerby’s The Stepmother was given a one-off performance in 1924 but has not been seen on a London stage since then. Now the Orange Tree has done what they do best, unearthing the play on one of their regular rummages through the archives and giving it a solid, engaging if slightly stately and stodgy staging.

Sowerby’s best known play, Rutherford and Son, is frequently revived (Northern Broadsides are touring it at the moment) and anthologised, but despite being relatively unknown, The Stepmother reveals itself to be just as interesting a piece of work, full of feminist fury at the way a woman’s fate - and her fortune – can be so easily buffeted about by the whims of men.

Lois, orphaned and alone in the world, has been working as the paid companion to a wealthy spinster; now, following the death of her employer, she stands to inherit a considerable sum. But the dead woman’s grasping brother Eustace Gaydon has no intention of seeing his late sister’s money slide out of his grabby, grubby grasp.

After a rather padded prologue set in 1911, which establishes Lois’ predicament, the play leaps forwards in time by ten years to the 1920s where we discover that Eustace has solved his financial problems by marrying the unfortunate girl. The adult Lois is now a successful business woman, managing her own dressmaking company while also acting as a mother figure to his two young daughters, but despite her evident business acumen, it’s her husband who signs the cheques and has final say in how her money is spent. Sowerby’s anger at this state of affairs pulses through the play - her feckless artist father having squandered both his own fortune as well as his wife’s – and it’s this fire that gives her writing its potency,

The figure of the stepmother, so often maligned - an upsetter of nests and a terroriser of children - is here made engagingly sympathetic. Lois is little more than a child herself when she is made to take the place of a dead wife and mother (one suspects she was given little in the way of a choice in the matter) and the bond between Lois and Eustace’s older daughter Monica is delicately drawn; not dissimilar in age their relationship is one of friendship and empathy at the other’s plight, rare and refreshing in its harmony. When Eustace is at his most badly behaved and caddish, it is to Lois the daughters turn.

There are echoes of Jane Eyre here, but this is a Rochester driven only by self-interest and his own financial mismanagement. Eustace, played by Christopher Ravenscroft - normally such an avuncular Sam Waterstone-y presence - is a proper hissable villain, the kind of man who scoffs “what’s a woman’s word in business?” as he – literally – trousers his wife’s savings. The performances on the whole are as solid and reliable as they usually are at the Orange Tree, all very well-pitched for the intimate space, with Katie McGuinness conveying a suitable mixture of smarts and vulnerability as Lois and Jennifer Higham agreeably wide-eyed and kind-hearted as Monica.

Sowerby’s writing is intriguingly shaded, particularly in regards to the character of Lois, who is far from a one-dimensional victim; her eventual journey into the arms of a lover is also depicted with a refreshing amount of sympathy, an escape route from an intolerable situation - though it’s telling that he also tinkers with her finances behind her back.

Sam Walters’ production is – as ever at this venue – of a certain degree of polish and intelligence, investing the play with tension and a degree of humour too, but its power is diluted somewhat by issues of pacing; the numerous fiddly scene changes - dominated by the interminable shifting of chairs and unfurling of rugs - allow rather too much of Sowerby’s anger to evaporate.

Reviewed for Exeunt
Posted by Interval Drinks at 8:26 AM No comments:

In the Beginning was the End, Somerset House 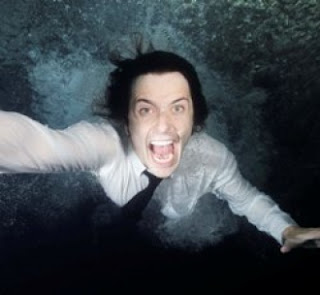 Down we go: down one staircase and then another, down into the warren of basements and sub-basements beneath the grand Italianate courtyard of Somerset House. Tristan Sharps, director of dreamthinkspeak, has a fascination with the spaces above, behind, between and below; his new production occupies a huge swathe of hidden rooms and corridors beneath that central courtyard, the bits of the building into which few people ever venture, a series of half-glimpsed corners usually concealed behind gates and locked doors, down dusty neglected stairwells.

Somerset House is a gift of a space for a project like this, vast and labyrinthine; there’s a lovely rabbit hole-y sensation when you first file down into the dark, leaving behind the sanctioned public spaces.

The production, which takes place in three separate but interconnected parts of the building – the East Wing and the West Wing of Somerset House as well as the old engineering department of King’s College – is, in turn, roughly divided into three separate but interconnected sections. The first is flickering world full of drawers and doors; bathed in sickly subterranean light, it’s a dark alien space in which your own reflected image in a window or on a television screen occasionally catches you off guard. Machine parts litter the desks and chalk marks infest the walls: the overspillings of overloaded minds. There is a sense of abandonment about these first rooms, an eerie quality intensified by ominous humming sounds and the numerous signs warning you about sheer drops, hazardous chemicals and silent alarms.

The next phase is – in stark contrast – very clinical in design: a bright, white world. Signs inform us that this is the headquarters of an international technology company called Fusion International. As we move from room to room, an array of products are demonstrated for our benefit; there’s something sinister about this space too, this underground laboratory, with its white-coated employees speaking rapidly in a variety of tongues.

Eventually these employees start to rebel against the system that constrains them, performing an act of rejection and liberation; together they create a Biblical tableau of bodies ascending, an image which is both classical in its aesthetic and incredibly vulnerable and human at the same time.

Whereas with large scale installations by companies like Punchdrunk, if you’re not one to follow the crowd you can sometimes find yourself floating through a series of beautiful but empty rooms, missing out on the most exciting scenes and set pieces. Here, while you can and should wander off and explore, there’s less far less chance of missing something vital. While each audience member has a degree of control in how they experience the piece, everyone’s journey encompasses the same key points.

The production was inspired by what Sharps calls an ‘apocalyptic doodle’ by Leonardo da Vinci, entitled “A Cloudburst of Material Possessions”, which depicts a great flood of manmade objects, a tide of things. While this single image provided the seed that branched and grew and became In the Beginning, it’s not necessary to know this as you explore. Part of the pleasure is in joining the dots for yourself, piecing it all together, picking up on the recurring imagery – of flood, of technological obsolescence – which flow through the production. Though there are times when it all feels a little too elusive and opaque, it is full of striking images as well as a surprising amount of humour; as an experience, In the Beginning is part psychogeographic adventure, part concrete poem (in the most literal sense), a fascinating descent into a world of rooms beneath rooms beneath rooms, of city striations, the trickle of water omnipresent.

Reviewed for Exeunt
Posted by Interval Drinks at 7:29 AM No comments: