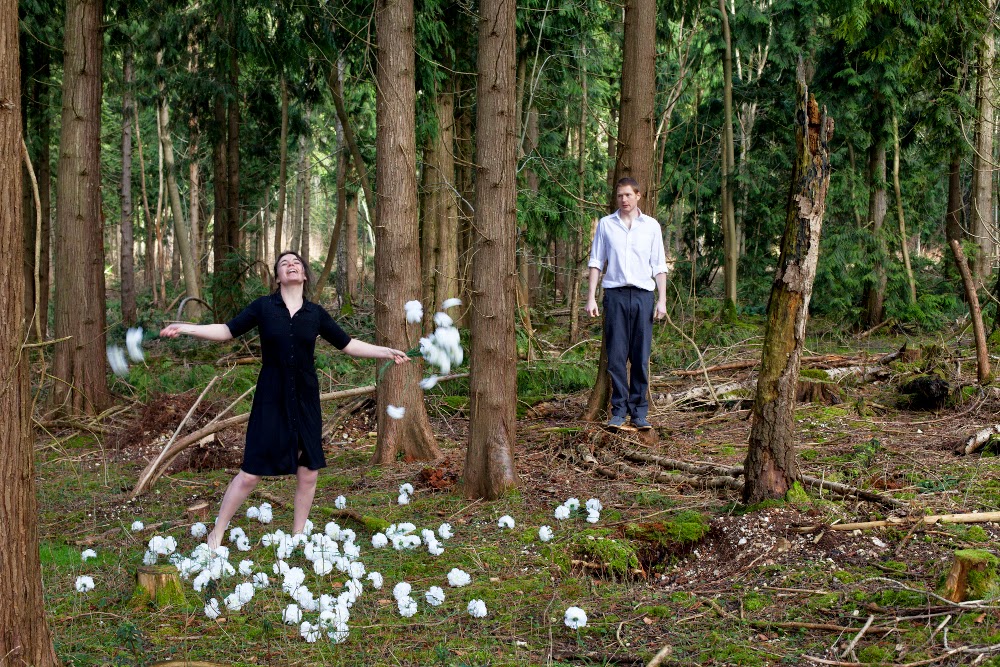 Goran Bregović fittingly refers to his vast ensemble of musicians, trumpeters, choristers and backing singers as the Weddings and Funerals Orchestra. His compositions draw on the musical traditions of the Balkans, of the Eastern European Roma, of Bosnia, Serbia, and Croatia, of Turkey – and of Bulgaria – they are songs of elation and celebration but also lament. Bregović is perhaps best known for collaborating with and soudtracking the work of the Serbian filmmaker Emir Kusturica and one of his most popular songs, ‘Kalashnikov,’ is taken from the soundtrack of Kusturica’s massive, messy allegory, Underground; it’s a sky-punching, foot-stamping, pistol-firing, rakia-downing, midnight embrace of a song (though not lacking in irony, teetering at times on pastiche). It is a song I have definitely danced to when drunk at least once.

It’s also a song that erupts several times throughout Two Destination Language’s thoughtful, quietly moving Near Gone – performed at the Bush as part of Radar – a show about trauma and distance. Katherina and Alister stand on a stage framed by bunches of white flowers (carnations I think, weddings and funerals again). They begin to tell us as story, with Katherina – who is from Sofia – speaking in Bulgarian, and Alister, after a beat, translating. At first her story sounds not unlike a 1970s language textbook. She tells us Sofia is very hot in the summer, she lists the abundant produce of the green markets – pears, peaches, berries red and blue – she tells us the women are very beautiful. All this is accompanied with by a series of gestures and movements which Alister, slightly reluctantly, mimics.

Katherina then starts to describe her parents’ house. She takes a long time doing this, honing in on small details, as if putting something off. Occasionally the translation machine breaks down: Alister gets a word wrong or misses a piece of information and needs to be corrected, thus calling attention to and extending the process. There is a gap, a lag, like you used to have with long distance phone calls.

Eventually Katherina starts to describe a serious accident that befell her younger sister, and the anguish of uncertainty, of waiting to see whether she would recover. The details are revisited and picked over, relived: the length of time it took for the ambulance to arrive, the doctors standing outside the hospital smoking. Her story is interspersed with blasts of Bregović’s ‘Kalashnikov’ to which she dances energetically but not chaotically, holding a bunch of flowers in each of her hands, strewing petals across the stage. While it is a song which invites abandon, there is a sense of ritual and order in her dance though it becomes more ragged with each new iteration, her cheeks flushing pink, her breathing getting heavier. It is a draining, emptying process.

Alister can only watch as she goes through these motions (and emotions). For while this is a show about trauma, it is also about distance, about being caught between states and places, being far away, geographically and culturally, from the place you want and need to be, about how to exist in that awful pause: waiting for news to come, good or bad.

I found that I was able to understand about half of the words in Bulgarian, which meant I was both waiting for Alister’s translation to clarify things while patching together Katherina’s words as she said them, getting trapped between what I understood and that which remained hazy and unclear, which in the end seemed an apt way to experience it.

For it turns out this is not only a piece about grief and distance but also about what it is to bridge these gaps, cultural, linguistic and emotional, to emerge out of the other side intact, to connect with someone else, to share this dance together.

Reviewed for Exeunt
Posted by Interval Drinks at 4:34 PM 34 comments: 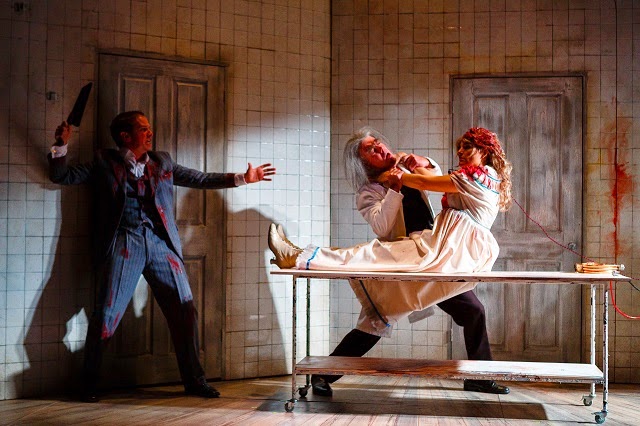 Gouge is a good word. It has a nice mouth-feel, ripe and round and red as a cherry. There’s a fair bit of gouging in Carl Grose’s homage to the notorious Théâtre du Grand Guignol, as well as some plucking and spurting and severing – and you can put money on the fact that blood will at some point incarnadine the theatre’s white tile walls

The whole set is fucking lovely in fact. They’ve built a raised stage and proscenium arch with wooden side panels that would not look out of place at a chapel, thick red curtains and a creaking and rickety roof, all within Southwark Playhouse’s Large space.

Grose and director Simon Stokes have pitched things perfectly. The play operates as both a potted history, celebration and pastiche of the repertoire of the famous Theatre of Blood. The best known plays – The Laboratory of Hallucinations and Crime in a Madhouse – are re-enacted but we also get a flavour of life behind the scenes: the interplay between their star writer André de Lorde - who penned so many of their tales of insanity and murder and came to be known as the ‘Prince of Terror’, (here played by an affable, almost chipper Jonathan Broadbent) – the theatre owner, and the acting company. The tone touches on Hammer-y camp sometimes but stays the right side of the line.

While the characters remain stock types, the cast have fun playing with them. Andy Williams does double duty as the theatre manager, Max Maurey, as well as cameoing as de Lorde’s inspiration and muse, Edgar Allen Poe (as played by Vincent Price shouldering a stuffed raven), while Robert Portal has a great time eating up the scenery as the Grand Guignol’s leading man, Georges Paulais, and Emily Raymond gives a similarly ripe performance as the scream queen of her day, Paula Maxa, “the most assassinated woman in the world”, whose lot was to be brutally dispatched and violated on stage in a series of ingenious and bloody ways.

Paul Chequer plays Ratineau, the man responsible for many of the props and make-up effects of the Grand Guignol, and designer Alex Doidge-Green has – wonderfully – recreated several of these objects and devices. There are curious and gruesome surgical tools, slithering tentacles of intestine, an abundance of clotted, matted hair, slashed and flayed and acid-eroded prosthetics, and various alarming contraptions into which a person can be clamped and tethered. A machine for the reanimation of severed heads is a particular delight.

Matthew Pearson plays de Lorde’s sometime collaborator, the experimental psychiatrist Alfred Binet – a nervy sort of fellow, a fainter – and the play’s more messy moments are interspersed with conversations between the two about the genesis of horror in the human mind, whether it takes some form of real life trauma to generate such macabre fantasies, whether they serve a psychological purpose.

These sequences can be a little dry at times, they can slow the pace of things, though to be fair the production would probably feel rather relentless without them. A better balance is, however, struck in the properly juddering second half, when the layers of reality within the world of the play start to overlap, when the Grand Guignol starts to exert its crimson-fingered grip, when the blood begins to pool and ooze and drip.