Circa: Beyond, Spiegeltent, Norwich 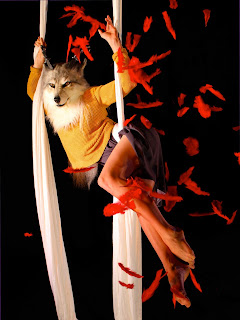 These animal men – and women – hang suspended from the ceiling, limbs taut. Silks twine around ankles; bodies bend in unnatural ways before dropping to the floor, gasps gusting from the audience.

Beyond, the new circus show from Brisbane-based company Circa, attempts to explore the ‘animal’ element in us all. To this end they often wear oversized bunny heads and cuddly bear suits while pushing their bodies to the edge of their capabilities. It sounds absurd, but this dash of the cartoonish syncs with the feel of the piece, a little bit dreamlike, a little bit skewed, a little bit silly.

Broken down into a series of sequences set to music, the show features contortionism, aerial work and a nerve-racking balancing act. The performance as a whole is incredibly athletic and physical and, as with the company’s previous work, the body’s frailties are as much on display as its strengths. In the intimate tent setting it’s possible to see the performers’ muscles pulse, their arms tremble with the effort involved and the sweat course down their faces.

Group displays are interspersed with solo turns. A plastic water bottle is used to replicate the spinal creaks and cracks as the performers twist and jerk around the stage, voodooing each other, and even though we can see the source of the sound, the audience still wince as one with each little crick. One of the performers arches her back and Linda Blairs around the room in the most unnerving manner, later she slithers towards the roof in a reptilian fashion.

Failure, or at least the potential for it, is written into their work. A balancing act featuring tin cans and a set of boxes threatens to go wrong – and at one point one box does drop to the ground – but the fact that we can see how difficult it is to achieve, and can read the strain on the performer’s face and in their eyes, makes it easier to appreciate the skill involved. If it was completely seamless, smooth and slick as sticky-backed plastic (or Cirque du Soleil), it wouldn’t be quite so entrancing.

On the other hand, when things go to plan, it’s pretty astounding too. In one of the most staggering sequences a performer almost casually completes a Rubik’s cube while her co-stars hurl themselves at her, clambering over and up her as if she were a tree.

Familiar stunts are rewritten. The act of squeezing through a stringless tennis racket is twisted by having it performed by one of the troupe’s female members. In lace stockings and a beribboned basque, she edges it over her body, but the sexual/striptease elements of the act are turned in on themselves. Her breasts refuse to play along and she has to shove and smush and force them through the racket’s aperture. She ends up with the racket resting around her hips, its handle waggling like a phallus.

This is a warmer show than some of their previous productions, the backing music including Frank Sinatra and Amanda Palmer playing Radiohead on her ukulele. The introduction of the human voice into the mix softens the overall aesthetic, creating points of connection and juxtaposition. The bear suits and bunny heads add to this effect, though as a device they feel underdeveloped. The thematic focus on the human/animal divide is fascinating in theory, but having set out their terms, the company don’t mine this seam as much as they might. This results in a captivating display of contemporary circus, but one that doesn’t fully tap into the promised beyond.
Reviewed for Exeunt
Posted by Interval Drinks at 5:00 AM No comments: 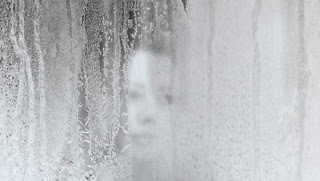 Conor McPherson’s 1997 play is one of words not actions. Stories are told, traded like currency; talk becomes an art form. The Weir is set in a rural Irish pub, beautifully evoked by designer Tom Scutt, a building of old stone wreathed in thin mist, with tatty rattan lampshades and walls the colour of old men’s thumbs.

The Guinness pump is on the fritz so garage-owner Jack is forced to grapple valiantly with the bottled stout. He’s one of a number of lonely souls who congregate nightly for a couple of pints and a ‘small one’ or two. Drinking with him is Brendan, the pub’s relatively young landlord, and Jim, the local handyman whose life revolves around his aging, fading Mammy. But the pattern of this particular evening is disrupted by the arrival of Finbar, a local businessman, who having flitted to the city, now sports a cream linen suit and an air of urban flash; he is accompanied by Valerie a “blow-in from Dublin” who has just bought a house in the area.

In an effort to appeal to this stranger in their midst, a rare female presence (the alarmed response when she requests a glass of white wine is one of the production’s funniest moments), the men start to tell stories, to conjure a landscape steeped in myth and memory. There is talk of fairy roads, of strange nocturnal knockings, of still, staring figures spotted on stairs or in graveyards. They each relate their own small encounter with the uncanny, moments – whether frozen or fevered – when they seemed to glimpse something beyond.

These are stories, one senses, that have been trotted out often before, fetched up on dark nights, spun out over a succession of glasses of stout. In many ways they’re fairly pedestrian, nothing to truly prickle the skin. The pleasure’s more in the telling than the tale.

While the men start out trying to charm Valerie, and maybe even to tease her a bit, after a while their stories become less about local ghosts and more revealing of themselves and their regrets, wants and losses. It’s a subtle shift, so when Valerie, buoyed by such talk, begins to tell her own harrowing tale, the delicate balance of things is upset as she careens into a place of true pain and heartbreak. It pulls all the men up short but it doesn’t entirely capsize the night, instead this interloper is gently enfolded into their small world.

Josie Rourke’s production is also a delicate thing, an environment in which any one false note would ring loud. The performances are all measured and knit well together. Ardal O’Hanlan’s slightly dim Jim conveys a kind of baggy sadness while Dervla Kirwan’s Valerie moves from nervy, girly outsider to centre of attention, without ever letting the character get eaten up by grief; her performance is anchored and steady. The play’s true masterstroke is in not letting Valerie’s moment of revelation crown the night, instead it comes full circle, letting Brian Cox’s craggy bachelor Jack weave the last story, describing one tiny act, one small gesture of kindness in a time when he thought he was lost, and a chance he let slide through his fingers years ago but which nags at him still, the ghost on his shoulder, the thing he will have to carry throughout his days. While his first story is told for show, this last one comes from some deeper place: he gives it to her.

Reviewed for Exeunt
Posted by Interval Drinks at 6:54 AM No comments: