A dialogue review of BAC's new 1-on-1-on-1 festival between myself and Catherine Love. We went on different nights and experienced different routes and a different collection of storytellers.

The full piece is over Exeunt.
Posted by Interval Drinks at 6:43 AM No comments: 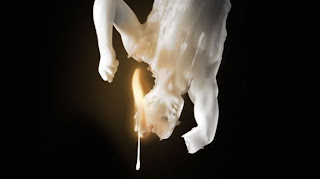 If Dexter has taught us anything it’s that when the heavy duty plastic sheeting starts gets rolled out things are bound to get messy. Yet in Joe Hill-Gibbins production most of the mess comes before this moment, the cacophony replaced by a quiet, desperate tension, the appalling gentleness of Edward’s inevitable demise made all the more powerful by the noise and excess that came earlier.

Hill-Gibbins’ take on Marlowe has a similar chaotic, near operatic energy to his recent version of The Changeling for the Young Vic. But just as that lost some of its focus and intensity when taken from the smaller Maria studio and blown up and out to fill the Main House, this too feels a bit hyper-aware of the size of the space it’s required to fill.


The opening sequence has a kind of familiar gloss, an almost Donmar-ish aesthetic, as John Heffernan’s king sits upright on his throne, his crown gleaming against a cloth of gold. But when the curtain lifts we’re instead presented with a series of stage flats, MDF battlements, stripped-down, fragile, transitory. Lizzie Clachan’s design takes full advantage of the depth and height of the Olivier with Hill-Gibbins again making interesting use of closed doors, spaces into which we can’t quite see, rooms in which conspiracies can be hatched amid silver curls of cigarette smoke.

After the opening coronation scene, the production becomes increasingly stylistically layered, making much use of Brechtian title cards and video, running Headlong into Katie Mitchell territory. It’s an everything-including-the-kitchen-sink approach, chock-full of references. Live recorded footage is used to convey a sense of up-the-nostril Blair Witch proximity to a world that might otherwise seem remote on the cavernous stage. One memorable sequence, which recalls the meta-theatrical playfulness of Rupert Goold’s Six Characters in Search of an Author, uses the external architecture of the National Theatre itself – its turrets and stairwells, its blocky concrete eminence – as a backdrop for the introduction of Spencer and Baldock. The cry of ‘drums’ becomes a defining one, with a throbbing, pulsing, humming running through things.

Yet at times it feels more like a tick-list of directorial influences rather than a cohesive universe. There are sinister helmeted henchmen – Three Kingdoms by way of Knightmare – and much gleeful anachronism. But this approach pays off in the end: as Edward’s balsa wood kingdom is toppled, the production stills itself too and the final scenes have a chilling and bleak power.

When fully robed in the opening scenes, Heffernan’s Edward combines the studied regal air of Eddie Redmayne’s Richard II with something of Disney’s other lion king; in the beginning he’s bratty and petulant, a foot stamper rather than a thumb-sucker, albeit one with a massive hard-on for Koyle Soller’s Gaveston, a drainpipe-jeaned yank outsider who makes a parkour-style entrance from the stalls, bounding onto the stage, wrapping himself around Edward’s body, locking lips. In an apt yet poignant piece of mirroring, Soller will later be the one to finish Edward when he returns as the assassin Lightbody. Despite the ominous expanse of plastic sheeting, there is no blood, just one lone broken man, the life leaking from him.

Good as both Heffernan and Soller are, they’re matched by Kobna Holdbrook-Smith’s deeply charismatic Mortimer and by Vanessa Kirby, whose crimson Isabella has the calculating aspect of Cersei Lannister. Near mute in the first half of the play and wearing a wig last seen on Guy of Gisbourne in Maid Marian and her Merry Men, Bettrys Jones’ Prince Edward really comes to life in the last few scenes, to unnerving effect; there’s strong support too from Kirsty Bushell and Penny Layden in some creative examples of cross-gender casting.

The production might well place the visual ahead of the lyrical, it might take a craft knife to some of those ‘mighty lines’ but these plays aren’t going anywhere, they can take it. It does however fall short of the queasy, bloated brilliance of Hill-Gibbins’ The Changeling, but that’s perhaps because it keeps its foot hovering just over the brake, it never quite lets rip, it never quite floors it, even though it threatens to on occasion.

Reviewed for Exeunt
Posted by Interval Drinks at 2:40 AM No comments:

Edinburgh 2013: Stand By for Tape Back-Up 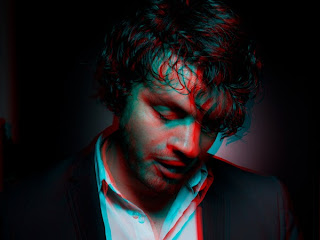 It’s human to seek patterns in apparent chaos, to hear voices in white noise, to sculpt shapes and faces from clouds. Ross Sutherland’s show is concerned with this phenomenon, with synchronicity, the ‘meaningful coincidence.’

In Stand By for Tape Back-Up, Sutherland riffs on found footage from an old video cassette belonging to his grandfather. He uses these clips, culled from the pop cultural backdrop of his 1980s childhood – The Fresh Prince of Bel Air, Ghostbusters, The Crystal Maze, Jaws – as the inspiration for a series of poetic pieces. The tape plays out behind him as he performs and his words are guided by the images, circling, syncing, each new loop of the tape generating fresh collisions. Pause. Rewind. Replay.

This is perhaps the most potent of Sutherland’s linguistic exercises to date. Previously he’s played with substitution and translation, machine-made poetics, participatory experiments in heckling, but here the formal inventiveness and iterative experimentation is coupled with something even more emotionally explorative. The effect is hypnotic, simultaneously soothing and rousing, the language ripe and bright. With each groundhog twist through the same set of images, each spin of a skinny-limbed Will Smith above the head of his Philly playground antagonist, things reset and another layer of interpretation is added.

The video footage seems to infect the verse: Sutherland is not just describing what’s happening on screen, it’s more subtle and symbiotic than that. He’s dancing with it, driven by it. It reminded me of the ghosting process in the Wooster Group’s Hamlet, a production in which the actors weren’t just engaged in restaging and recreating Richard Burton’s famous Broadway production but were somehow inhabited by the spectral monochrome world which played out on the screens behind them, an act of channelling, a dash of the uncanny. I was also put in mind of Nature Theatre of Oklahoma’s epic Life and Times, or at least the first two episodes, in which the minutiae of one woman’s life, all the little tics and rhythms of conversational speech, complete with pauses, ‘ers’ and ‘ums’ were rendered poetic through repetition. There’s something similarly alchemical going on here.

Nostalgia can be a grubby currency, cheaply traded (especially on the Fringe), but shared cultural memory has an undeniable emotional charge which Sutherland taps into, exploring his relationship with his grandfather, both as a child and as an adult, evoking a sense of inheritance and human continuation through a collage of the shows he once watched as a boy.

The clip of The Crystal Maze shows a woman repeatedly failing to understand the rules of the game despite her teammates’ urgent shouted instructions; she comes close to solving it, but bails in the final seconds. No matter how many times you repeat it, whatever spin you put on it, that crucial button remains unpressed, the elusive crystal unclaimed. The Jaws sequence is perhaps not quite as strong as the others, but it serves a purpose in terms of textural variety and the Natwest ad coda is a beautiful fist-pump of a finale.

This a wonderfully layered piece, touching, funny and linguistically thrilling; a show which works on a whole host of levels, a show threaded with modern madeleines and great, green ghosts in the machine.

Reviewed for Exeunt
Posted by Interval Drinks at 10:46 AM No comments: 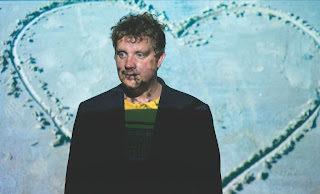 John Osborne’s On the Beach provides its audience with a chance to draw breath amid the noise of the Fringe. It’s a quiet, contemplative piece, an act of taking stock. Over the course of the show Osborne describes in detail a walk he once took along Weymouth beach on a rare sunny English afternoon, a minor act of escape.

He gives us potted portraits of the people he encounters – the man reading an Irvine Welsh novel in his deck chair, the family playing a game of cricket together, and the elderly couple who remember the beach before it was clotted with stag and hen parties, for whom it provides a respite from a world that’s galloped on ahead of them – imagining their backstories.

The beach at Weymouth is a place Osborne last visited at the age of eleven and memory, both personal and cultural, shape this show. The British seaside is a strange kind of borderland, a place of Greeneland seediness and melancholy as well as ice cream cheer and arcade fire. Osborne captures that contrast through a process of collage. Some of his observations are simple, even a little mundane, but through a process of gentle layering a picture is painted. The show is not specifically about the decline of a place the or the laying of coastal ghosts, it’s not a hymn to what once was, rather a brief, refreshing paddle in what remains. It deals in nostalgia in the lightest of ways with the understanding that looking back won’t heal you, but it is important if you’re to move forwards.

Osborne’s conversational style of delivery is delicate, even hesitant in places; it’s the antithesis of aggressive, his words lapping like waves, his demeanour that of a slightly hung over, rumpled puppy. His story is intercut with music – Belle and Sebastian, Nina Nastasia’s apt ‘Our Day Trip’ – and seaside imagery is projected on the wall behind him: merry-go-rounds and time-bleached photographs, a solitary figure sitting on a bench and staring out at the water. An excursion to Great Yarmouth, care of a friend of his who lives by the sea but hates the feel of sand beneath her feet, feels digressive and underdeveloped in comparison to the rest of the material.

It’s the accumulation of detail that really makes the piece shine. There’s a sadness to it but also a hopefulness, a courage in its quietness. It invites its audience to slow down, remove their shoes and open their eyes, to walk with him for a while, an invitation which feels particularly necessary and welcome amid the clamour of the Edinburgh Fringe.

Reviewed for Exeunt
Posted by Interval Drinks at 9:43 AM No comments: