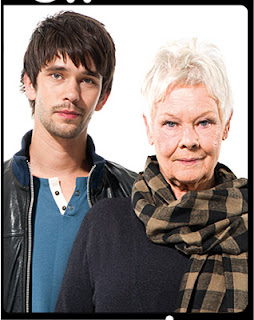 John Logan’s Peter and Alice – the only new play in Michael Grandage’s current West End season – trades in information. It’s all tell. Logan envisages a meeting between the elderly Alice Liddell-Hargreaves and Peter Llewellyn Davies, now a war-shattered young man. It’s an idea ripe with potential, and these two did apparently meet briefly at one point, but instead of having them engage in some form of recognisable conversation – reflecting on the characters they inspired, Lewis Carroll’s Alice and JM Barrie’s Peter Pan, and the world they feel they have disappointed by committing the twin sins of growing up and growing old – they spend much of the time exchanging potted biographies.

Logan slowly starts to give shape to the pattern of their flashbacks by introducing the characters of Carroll and Barrie – the Reverend Dodgson and Uncle Jim (played by Nicholas Farrell and Derek Riddell as two similarly suited and reticent men)– and poking around in the psyche of these two complex individuals, men who seemed altogether easier and happier immersed in the world of children than of adults and who did their best to fix the objects of their particular affections and obsessions in a state of eternal childhood. Alice asks bluntly if Peter was molested, and he replies that he was not, at least not physically, but it’s clear that he regarded what Barrie did to him, what he took from him, as a kind of abuse. The play shows that both characters were, to a degree, composites – there were three Liddell sisters and five Llewellyn Davies boys, and Peter was by all accounts far more timid and nervy than his dashing and adventurous brother, Michael – but they were the namesakes and so they carried the weight of that connection.

On top of this Logan places a third layer in the form of the archetypal stage/page Peter Pan and Alice, played by Olly Alexander and Ruby Bentall, both eye-wide and arm-wide in their performances, him in a ragged green tunic with a cloud of disobedient hair, her in a broad, blue dress with long blonde tresses, a walking John Tenniel illustration. These two hover in the background, like lost shadows, and occasionally pass comment – there are sweet moments when they glance tenderly at their other selves, or smilingly reveal little hidden things, like the flask of gin in Peter’s pocket – but the relationship between the three dramaturgical layers is always fuzzy. The effect is a little like picking up a copy of a newspaper where the print colours haven’t quite synced.

Occasionally the play threatens to do something a bit more intricate, as in the scene where Dench’s Alice recalls a conversation with Dodgson in the dark room of his photographic studio, him struggling to put into words exactly what she means to him while clutching her fragile, frozen image in his hands. Later Logan seeds Michael’s probable suicide – sliding under the water of Sandford Pool with his close friend clasped to him – in a scene that shows the growing prickliness of Barrie towards the young man. But these moments are brief and over quickly.

The lead performances give the piece its weight. Judi Dench is magnificent, shucking off her initially haughty and brittle exterior like a fur stole, loosening her spine and her smile as she recalls herself as a child, giggling, gambolling – she did something similar in Peter Hall’s otherwise stiff and stately Midsummer Night’s Dream at the Rose Theatre and it’s similarly enchanting here. Beneath his tweeds, Whishaw is a black bundle of anguish, a man on all too close terms with death. Llewellyn Davies had a rough life: along with his brother’s death, he lost both his parents early to cancer – his mother’s death swift, his father’s horribly drawn out, disfiguring and pain-wracked – while another brother perished in the war. Whishaw’s Peter is at first gentle in his melancholy, soft-spoken and emotionally contained. But when he cracks and recalls his own time in the mud of the trenches, and the psychological toll of all that death and loss, it’s awful and it’s raw and it’s amazing, all at the same time.

Grandage’s production is also beautiful to look at. Christopher Oram’s set is, initially, typical of his designs at the Donmar Warehouse, all dark tones and diffused light, the sun seeping down into a book-lined room through smeared and murky glass. But as Peter and Alice go back into their respective pasts, this is replaced by a toybox of a theatre, filled with a succession of vibrant painted flats in Crayola colours that part and lift as the characters push further back into their memories; the stage becomes a Never-Wonderland of poster paint palm trees and storybook lagoons, with the face of the Cheshire cat looming above like a twisted moon. Visually fitting as this all is, it also highlights the play’s theatrical lack, its filmic bittiness, the way it strives to be elegiac and haunting – and in its best moments succeeds – but also feels like it may have been a more potent experience on screen than on stage.

Reviewed for Exeunt
Posted by Interval Drinks at 5:23 PM No comments: 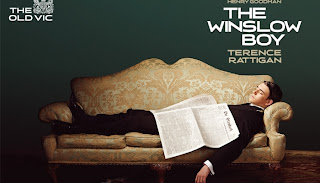 The emotional undercurrents of Rattigan’s plays swirl like swans’ legs beneath the clipped, clean surface of things. For all its exploration of the line between what is right and what is just, its bucking against the power of the Navy to dispense punishment as it sees fit, with no proper trial, his 1946 period piece, The Winslow Boy, is in many ways most potent as a portrait of a family in times of change.

Arthur Winslow, the Edwardian patriarch played with a silvery glint by Henry Goodman, is a superficially stern man, gruff, moustachioed and stiff of lip, but his underlying humanity is always evident. While he is willing to sacrifice both the family finances and even eventually his own health for the sake of seeing right done, he is never blind to the great cost of his actions; he comprehends all too clearly the toll his fight is taking and yet he cannot drop it, cannot let it fall. In amongst this, it his relationship with his outspoken, cigarette-smoking, suffragette daughter Catherine and their understanding of each other’s drives and beliefs, which forms the heartbeat of the play.

The play is a courtroom drama in essence though it never strays beyond the drawing room of the Kensington home of the Winslows, with its William Morris wallpaper, its mahogany side-tables, nut-brown leather wingchairs and notably charming curtains. When the youngest Winslow, thirteen year old Robbie is sacked from Osborne Naval College for the theft of a five shilling postal order, his father decides to take the case to trial, employing one of the country’s most pre-eminent barristers in order to do so. Based on the case of a young man called Archer Shee who was expelled in similar circumstances in 1911, the fight becomes bigger than the family, a cause celebre, with journalists cluttering the front steps and the parlour maid volubly reporting back on the day’s legal proceedings. In the process, Robbie, is slowly erased from his own story, dozing on the sofa as vital discussions take place over his head.

The role of the lawyer Sir Robert Morton, so dapper in his evening clothes, Sahara-dry in temperament and casual in his brilliance, is a gift of a part for actors with a tendency towards scene-eating, but Peter Sullivan’s portrayal is more delicate and realistic in proportion; he doesn’t dominate the stage, doesn’t over-balance the see-saw. So when his courtroom persona does emerge, when he aggressively interrogates Charlie Rowe’s whimpering but adamant Robbie before dangling a way out in front of him like kipper to a kitten, it’s all the more powerful.

Naomi Frederick is similarly precise in her performance as the principled sister Catherine, who sees one fiancé ditch her as the family name is smeared across the daily papers, and is forced to fend off another kindly but unsuitable suitor, all the time knowing that her age and independent spirit make her chances of marriage increasingly unlikely. Deborah Findlay clearly relishes the moment when Mrs Winslow finally gets to crack, to shed her smile and blaze at her husband about the extent of the sacrifice the family has been obliged to make as a result of his unshakeable two-year pursuit of what he holds to be right. But though Henry Goodman’s Arthur gradually weakens physically, his resolve never leaves him; his eyes shine even as his hands shake.

Lindsay Posner’s production conforms to everything you’d expect a production of Rattigan at the Old Vic to be. It’s elegant, stately, the performers moving about the stage as if moving about a stage, not a domestic space, arraying themselves in tidy semi-circles and appealing tableaux, never bunching or crowding. This choreography is somehow all the more obvious here, because while Peter McKintosh’s drawing room set has been elongated to fill the stage, it intentionally neglects the vertical, leaving a large black void above, an odd mouth. As a production, it’s all very, very solid, and very decently done, but it’s strangely cool in places, a little too slick, this despite Rattigan’s inherent warmth and charm and heart.

Reviewed for Exeunt
Posted by Interval Drinks at 4:25 PM 1 comment:

I recently spoke to the poet Lemn Sissay and West Yorkshire Playhouse's Associate Director Alex Chisholm about the process of bringing  Benjamin Zephaniah’s acclaimed novel, Refugee Boy, to the stage.

You can read the feature in full at The Stage.
Posted by Interval Drinks at 7:57 AM No comments:

In a back room at an empty Theatre Royal Drury Lane - which is currently under refurbishment and covered in seemingly entirely covered in plastic sheeting in preparation for the arrival of Charlie and the Chocolate Factory - I spoke to Richard Marsh and Katie Bonna about dramatic poetry, the differences between assuming a poetic persona and playing a character, and their two-hander Dirty Great Love Story, which was one of my favourite shows at last year's Edinburgh Fringe.

You can read the full interview on Exeunt.
Posted by Interval Drinks at 4:51 AM 1 comment: