The Snow Queen at the Rose Theatre 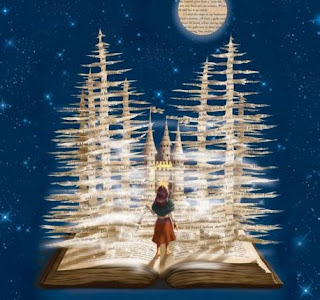 The set alone is a source of wonder. Paper artist, Su Blackwell, in her first design project for the stage has created a delicate, wintry world of trees, cottages and lampposts that appear to have been snipped from the pages of a paperback. Black lettering nests against white, making an apt and charming backdrop for Charles Way’s adaptation of Hans Christian Andersen’s classic fairy story.

Young Gerda is a nervy girl, prone to panic attacks and terrified of her bad-tempered schoolmaster father, Mr Overskou. When her classmates take turns to dance in front of one another, she can’t bring herself to join in and her best friend Cei has to calm her down. Though Cei and Gerda have been friends and playmates all their lives, Mr Overskou disapproves of the boy’s dreamy ways and forbids them to see one another; it is then that Cei falls under the Snow Queen’s spell. A shard of mirror pierces his heart and he becomes cold and cruel before being whisked off to the Queen’s winter palace and forced to piece together the shattered fragments of her magic mirror. But though the townspeople believe Cei to have drowned, Gerda refuses to accept this and sets off to find him.

Way’s adaptation has Gerda travel through the changing seasons with winter forever on her tail. In spring she encounters talking flowers and a secateurs-wielding gardener; in summer she encounters a gaggle of Hooray Henry types and in autumn she encounters a robber gang and an ageing reindeer. There’s much wit and invention in the visual detail (umbrellas turn into autumn leaves, paper butterflies alight on paper trees, billowing white fabric is used to create a downhill sleigh ride) and some gentle humour in the writing. Gerda grows slowly in confidence and strength as the story progresses, declining to give up her red boots to the spoilt Sloaney teen princess and taking on the robber queen in a dance contest, but the production doesn’t overplay her emotional growth and this aspect of the writing is handled with a pleasingly light touch.

If anything Natascha Metherell’s production is too gentle and sedate. It has its moments of comedy and its moments of chill but there are a few too many slack patches that cause outbreaks of fidgeting amongst the younger members of the audience. Sara Stewart’s towering, ice-eyed Snow Queen is also the source of some genuine cries of alarm and, in one child’s case, a fountaining of frightened, urgent tears. The production seems better pitched at slightly older children than at the very young.

Some strong performances help compensate for occasional failings in pace. Bettrys Jones is compelling as Gerda, her initial anxiety and fretfulness slowly transforming into maturity and strength, and there is some good support from Michael Matus as the menacing Mr Overskou (who also cameos as a decidedly camp daffodil) and Deirdra Morris as the archetypal kindly, wise grandmother. What’s missing, despite all its considerable polish, is any real emotional tug or genuine sense of peril; it’s all a little too neat and tidy and lacks the wild fringes of the best children’s theatre.
Reviewed for Exeunt
Posted by Interval Drinks at 6:27 AM No comments:

The Ladykillers at the Gielgud Theatre 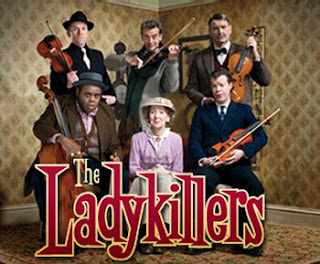 Though Graham Linehan’s stage adaptation of this classic 1955 Ealing comedy is superficially appealing on a number of levels, taken as a whole it doesn't quite satisfy.

Peter Capaldi plays the reptilian Professor Marcus – first revealed to the audience in silhouette – the head of a criminal gang who hides out in the Kings Cross house of kindly Mrs Wilberforce (Marcia Warren) under the pretence of being members of a string quintet.
It's hard to fault the cast, but while the film celebrates the triumph of something fundamentally English in a murky post-war world, Linehan seems far more interested in mining the story for its comic potential. As a result the production is stuffed with recurring gags and physical comedy, but there's something very broad about the way the whole thing is pitched and it only really hits its stride in the second half, when the robbery has been committed and the silliness gives way to something more sinister. As tension mounts between the gang members and they begin to turn against one another, Sean Foley’s production takes on the dark air of a fairy tale. There's also more than a trace of the contemporary heist movie to proceedings: Reservoir Dogs is cited as an inspiration and there’s even, I believe, a visual reference to The Taking of Pelham 123.
Linehan deviates from the film in some entertaining ways; a sequence in which the gang are forced to perform for Mrs Wilberforce’s elderly friends and have to try and pass their ineptitude off as musical experimentation is particularly amusing. But the piece never sustains this level of invention and at points comes close to pantomime.
Michael Taylor’s gloriously skewed, expressionistic set creates a sense of physical and moral subsidence which the production never fully capitalises on but the cast are clearly enjoying themselves which goes some way to compensate for the occasional sags in pacing and the overlabouring of some of the jokes. Warren is deliciously dithery as Mrs Wilberforce, fragile yet far more formidable than the men around her will credit, and Capaldi clearly relishes his villainous role, stalking the stage like a Lotte Reiniger shadow puppet, revelling in each hike of an eyebrow and each long-legged stride. Clive Rowe, James Fleet, Ben Miller and Stephen Wight are also on good form as, respectively, the slow-witted but well-meaning One Round; the nervy Major with a fondness for women’s formal wear; the volatile Romanian gangster with a near pathological dislike of old ladies; and the amphetamine-driven Harry, who comes across like a more docile version of Brighton Rock’s Pinkie Brown with a penchant for housework.
Reviewed for Theatermania
Posted by Interval Drinks at 3:30 PM 1 comment: