The Container at the Young Vic

My Guardian blog on Clare Bayley's play, The Container, which is about asylum seekers and human trafficking and is staged in an actual shipping container, is over here.

The 9pm performance last Thursday which I saw took place in the middle of a storm, with the rain crashing down on the metal roof with all the force of Animal from the Muppets playing an hour-long drum solo, which if anything made the experience more intense.
Posted by Interval Drinks at 1:32 AM No comments: 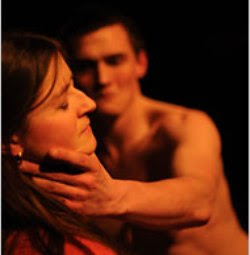 There’s an interactive element to Ella Hickson’s Eight. As audience members arrive at the theatre, they are directed towards a touch-screen monitor near the box office. There they can read through the synopses of eight possible monologues and vote for the four they would like to see most. People like to vote for things, we like to have a choice or the illusion of choice, and so only the four most popular will be performed, though all eight actors remain on stage throughout the evening as a reminder that choice is as much about what is excluded as what is included, and that for the four monologues we do see there will be four that we don't. (Interestingly, during its New York run, all eight monologues were performed nightly, changing the concept of the show entirely).

Those that were performed on the night I attended were all solidly acted, particularly by Simon Ginty as the teenage Jude, despatched to an overseas language school by his father and told to "return a man." There he develops an increasingly intense passion for his middle-aged French landlady and loses himslef in thoughts o perfume and lingerie. It's the lesser of the four selected pieces but his performance sells it. Solomon Mousley is also compelling in the most memorable piece of the night, as Miles, a young American Merrill Lynch exec who "won everything he touched" and whose life was derailed by the 7/7 attacks.

While there’s no denying that Hickson is a skilled writer, some of the pieces were far stronger than others and the simple presentation of these character sketches was rather straightforward in comparison with the unusual set-up (however, I now gather there are meant to be some projections that were not used on the night I went). The notion of choice and chance is tied most overtly with Miles’ narrative, but the inclusion of some of the other pieces felt rather arbitrary, despite Hickson's assertion that the characters are all somehow representative of a generation, "showing the effects, when taken to extremes, of growing up in a world in which the central value system is based on an ethic of commercial, aesthetic and sexual excess."

Another monologue concerns Holly McLay's Bobby, a single mum with two young children who gets fired from Tesco in the run up to Christmas. She gets a new job with a wealthy, elderly woman, helping her to prepare for the coming festivities and becomes entranced by the woman's life - with the rich, Christmas smell of her kitchen as they prepare puddings - and also frustrated by what she sees, by the things and the life that she will in all likelihood never possess. The gap between her life and this woman's life - and the impossibility of bridging it - is just too big and Bobby's frustation spills out of her in a sudden expletive-flecked flow.

The final piece of the four concerned Gwendolen von Einsiedel's Astrid, a woman returning to her lover's bed in the middle of the night after a liaison with another man. Both these pieces feel like they are scratching at the skin of something true and honest, but there is not room to dig deeper, to explore more, and the Christmas setting of the former piece feels a little obvious.

The very nature of the production means that each performance will be different and it seems likely that on another night the sense of disjointedness I felt may not have been so strong. But, all the same, there is something a bit anticlimactic about the show after the novelty of its opening gambit.

Extended version of a review that appeared in The Stage.
Posted by Interval Drinks at 2:41 AM No comments:

The Importance of Being Earnest at the Open Air Theatre

The Open Air Theatre in Regent’s Park is indisputably one of the loveliest performance spaces in London.

Surrounded by green, canopied by a pinking sky, it is a glorious place to be, even on a typically British evening full of hovering clouds forever threatening to unburden themselves.

It is also a space that places certain demands on both the audience and the performers. There are issues of audibility, there is not much room for nuance, a high premium is placed on the idea of 'charm'. And then, of course, there’s the weather, the wilful English sky, which looms like a dog on a worn, thin leash that could snap at any time.

Irina Brown’s production opens in a charming manner with the parp and twang of live music accompanying the actors as they stroll down the steps to the stage. Once there they turn and squint at the audience through a series of optical devices: binoculars, spectacles, a magnifying glass. They look at us as we look at them.
A shame then that the scenes following this beguiling opening have the grace and pace of a tottering old man. The sky seems to agree. A few thick drips fall on our heads and then the rain starts to curtain down. Hoods, hats and brollies are unfurled while the actors battle on, with Dominic Tighe’s Algernon gamely scoffing cucumber sandwiches as his shirt shoulders dampen, and Ryan Kiggell’s stuffy, slow-tongued Jack looking about anxiously.

After the interval things brighten considerably, and not just meteorologically-speaking, though the rain does cease. The stage has been reset to resemble Regent’s Park’s rose garden, with knee-high pink blooms and a small Japanese bridge. Then Lucy Briggs Owen’s Cecily arrives – wide of eye and dressed in flowing white, girlish yet knowing, skittering yet seductive – and her presence immediately lifts things.

Her double act with Jo Herbert’s Gwendoline is delightful, especially in the scene where Herbert forces herself to swallow a mouthful of sugared tea. It’s a lovely glowing moment in a production rather short of them. Whenever the production hits its stride, it does something to undermine itself. The chief sin in this regard is an interminably long scene change, the ponderousness of which no amount of amiable musical accompaniment can camouflage. It goes on forever.

This aside, the second half is tighter in many respects; there are some clever visual touches and, to her credit, Brown does succeeds in making the audience really listen to lines that are in danger of being blunted by over-familiarity. The set's curving white ramp is put to much comic use and there are some wonderfully elaborate hats. But the production too rarely nails the fizz and wit of Wilde’s words and while the production does display a great degree of charm - of the white linen and Pimm's kind - it doesn't have much else to offer.

Reviewed for musicOMH.
Posted by Interval Drinks at 3:15 AM No comments:

Apologia at the Bush

It is one of the lesser known rules of theatre, though not unlike Chekhov’s one about the gun, that when a white Japanese designer dress, the expense of which has been explicitly noted, is a worn by a character in a play it is bound to come to a - literally - messy end before the final act.

Alexi Kaye Cambell’s debut play, The Pride, which was staged upstairs at the Royal Court at the end of last year, netted him both an Olivier and a Critics’ Circle award. His second play eschews its predecessor’s dual, time-hopping narrative for something that is structurally more conventional.

Kristin Miller is an eminent art historian who has recently published her memoirs. She was politically active in the 1960s and is a veteran of numerous protests and barricades. Her life has been rich and eventful but her free existence came at a cost. Now, on the evening of her birthday, she is expecting her two sons and their respective partners for dinner. The eldest, Peter, is a banker, a career choice that prompts Kristin to casually enquire if he is still busy “raping the Third World?” (“brutally” comes his swift reply) while the younger son, Simon, has recently lost his job and is clearly emotionally fragile.

Both men are in relationships with women who are the about as far away from their mother in terms of temperament and personality as it’s possible to get. Peter’s girlfriend, Trudi, is a perky American blonde with an unfading smile whom he met at a prayer meeting, while Simon's girlfriend, Claire, is an actress in a soap (or a 'serialised drama' as she insists they refer to it) with expensive taste.

Superficially at least the play could be said to echo Absolutely Fabulous in its examination of the relationship between a dominant woman with a bohemian past and her rather staid, sensible offspring. But Kristin is no Edina. She is dauntingly intelligent, utterly intolerant of stupidity and vapidity, and unable to put aside her principles even if it means causing offence. When a nervous Trudi presents her with an African mask as a birthday gift, Kristin launches into a speech about cultural respect and continues to subtly patronise her as the evening progresses. She is also unable to conceal her displeasure in Simon’s choice of partner and is forever needling Claire, unpicking her every comment.

The play hangs on the publication of Kristin’s memoirs and the fact that both her sons feel hurt to have not been included in the book. To them this encapsulates her failings as a mother over the years: her politics and career always took precedence and when they were taken away from her by their father, they believe she didn’t do enough to try and get them back, they believe she abandoned them.

Paola Dionisotti, with her classical expressive face framed by a fog of copper hair, is compelling as Kristin while Sarah Goldberg is equally impressive in what is perhaps the more difficult role of Trudi, the amiable American girlfriend. There is an openness and a clarity to her. She has a certain kind of American confidence and yet is willing to listen and to question herself; she seems genuinely moved by Kristin’s talk on the revolutionary power of Giotto. While Kristin sometimes patronises Trudi, Campbell never does, which is refreshing given how much of a ‘type’ she initially feels.

Neither son is anywhere near as well drawn as these two women and elsewhere the framework of the play rises to the surface as if coming up for air. The way in which each character gets to say their piece feels rather forced; in particular an attempt to explain away Claire’s acquisitive tendencies by having her briefly recount her poor childhood feels rather glued on – like an afterthought and a rather unconvincing one at that.

Josie Rourke’s production delivers an exhilarating dinner scene, with much simmering and building leading to a satisfying explosion, but the second half sags a bit in comparison. The play rather pounds home the fact that modern women owe a lot to the bravery and commitment of women like Kristin and that maybe some would benefit from having a bit more of her drive and conviction. There are, however, some gripping passages of writing. The scene between Simon and is mother when he recounts an incident from his childhood that has clearly shaped him, an incident she never knew occurred, is heart-in-mouth stuff.

There is also a Guardian blog on the Oubliette collective over here.
Posted by Interval Drinks at 3:24 AM No comments: