Someone Who'll Watch Over Me at Southwark Playhouse 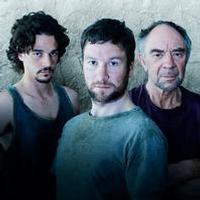 An Irishman, an Englishman and an American. The set up for Frank McGuinness’ play sounds like the opening line of a joke – which is fitting, as humour plays a vital role in this intense three-hander set during the Beirut hostage crisis. Laughter keeps the characters sane; it’s their best defence against the situation in which they have found themselves – to cry, to scream, to beg, would be to let their captors win.


The play is also a celebration of the imagination. The three hostages, Adam, an American doctor, Edward, an Irish journalist, and Michael, a widowed English academic, gain a degree of freedom in this way: through fantasy, through the sharing of stories. The men re-enact famous tennis matches, they compose letters home which they know they can never send, and they take a ride in a flying car: in this way, briefly, they soar, for a few fleeting moments they leave their dark, windowless world behind.


These three disparate men, thrown together, stripped of all they own and know, sweat-stained and unshaven, are each other’s only means of support. They come to respect one another and maybe even to love one another. Robin Soans’ Michael is the last to arrive. A bond has already formed between Billy Carter’s Edward and Joseph Timms’ Adam; they know each other’s habits, fears and dreams. Initially Michael and Edward clash, they rub each other up the wrong way, they make little digs at the other’s expense. In part it’s an Irish/English thing, a cultural chasm they make little effort to bridge. Michael in particular is written (and played), at least at first, as a stereotypically fusty, emotionally limited Englishman of a certain era, fond of tea and a nice glass of sherry, but as their situation becomes even more fraught and desperate, their relationship becomes warmer. A rare tenderness develops between the two men, the kind of connection that can only be classed as love.


The play, a fictionalised version of the hostage ordeal of Brian Keenan and John McCarthy, covers a period of years; the passing of time is marked by bursts of violent white light. There’s something Beckettian about their situation – the endless waiting, the little rituals and routines, the idea that the freedom they yearn for may never come – but McGuinness is also alert to the psychological reality of confinement. The slow erosion of Adam’s emotional strength is upsetting to watch; he turns increasingly inwards, his confident façade falls away revealing his fears and weakness.


Jessica Swale’s consistently engaging production – which marks the play’s twentieth anniversary – emphasises the venue’s capacity for claustrophobia; she uses black curtains to reduce the performance space and to force the characters even closer together. The trains which regularly rumble overhead become part of the fabric of things. As the three men cast glances at the ceiling where their unseen captors sit, the overhead roar and whine, the grind of metal on metal, takes on an increasingly ominous air.


Swale also draws excellent performances from her cast. Soans soon transcends the limitations of his buttoned-up character and Timms subtly conveys Adam’s increasing fragility, his deliberate drawing away from the others as he comes to terms with the fact that, as an American, he stands to suffer most. Billy Carter has the most complex role; as Edward, he is brash, quick-tempered and combative but also compassionate, capable of gentleness, in many ways the most robust of the three.


McGuinness’ play deliberately keeps the politics of the situation at arms’ length, but its emotional charge comes from this sharpness of focus, this blotting out of all else save for these three men, their cramped subterranean cell and the stories they tell each other in order to survive.
Reviewed for Exeunt
Posted by Interval Drinks at 4:02 AM No comments:

Misterman at the National Theatre 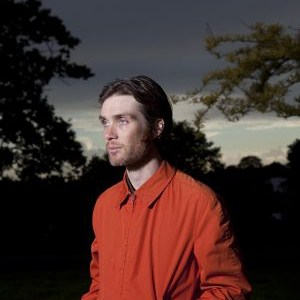 Enda Walsh’s plays are full of acts of retelling and returning. Characters relive the same moments over and over again, they get tangled in their own stories.

Thomas Magill, the protagonist of Misterman, has populated his world with voices, both from on high and from within. (The play is itself an act of revisiting, a revised version of a piece first performed in 1999). Through a series of tape recordings Thomas has recreated the village of Innisfree where he lives a life of quiet routine with his mother, a life of tea, biscuits, three-bar gas fires and Vicks VapoRub, and is an object of considerable local derision. Sometimes he interacts with these recorded voices, sometimes he acts out a dialogue with himself.

On the day of the Innisfree Community Dance, Thomas sets out from his mammy’s house to restock her stash of Jammie Dodgers and meets a series of neighbours along the way. Each encounter emphasises his isolation. Thomas has a very narrow view of human morality; he believes that people have strayed far from the path (“greed is our communion, sin our religion”) but they are not incapable of being saved – and that he has it in him to save them. Yet his neighbours at best fail to share his zeal, at worst they abuse and taunt him. He jots down their transgressions in a little notebook he carries for the purpose. Things finally change for Thomas when he gains a companion in his mission, an angelic figure called Edel.

There’s a degree of ambiguity to how much of Thomas’ persecution is real, how much of it delusion. The tapes seem to taunt him, playing on even when stamped on and smashed to pieces. And in Cillian Murphy’s astonishingly chameleonic performance it’s sometimes hard to spot the line between the interior and exterior voices. He really is quite something to behold, inhabiting character after character in a process of mass possession. His timing is extraordinary as he zips across the stage, keeping pace with the various recordings and shifting between moments of comedy and unnerving volatility.

The play has a purgatorial quality; there’s a sense both that Thomas has only recently fled to this desolate space following the awful events of the day just gone, and that he’s been here forever, locked in an endless loop, repeating and repeating the moments leading up to the inevitable tragedy. The use of tape recordings, with their little clicks and whines, only adds to the sense of Beckettian ritual.

Jamie Vartan’s brutal ruin of a set, a vast wasteland – as deep as it is wide – of steel shutters, skewed fluorescent strip-lights and raw concrete, does double duty as deserted warehouse and psychological terrain: an unseen hound snarls and howls outside; a crop of neon crosses glows in the murk. (Perhaps because of the Murphy connection, there are times when Christopher Nolan’s Inception comes to mind, especially when props start appearing from nowhere: Jammie Dodgers plummet from above, balloons drift and trip across the stage). This is Thomas’s dream chamber and it’s a dark, dark place.

The production is a technically intricate one but it wears it lightly. Walsh’s writing has moments of lyricism and moments of comedy, but there’s a sense of old ground being covered; the tragic event to which the play builds up is predictable and the idea of the loner made lonelier by an uncaring town, pushed to the edge by unthinking acts of cruelty, is not unfamiliar – the disco finish, with its glitter-ball shimmer and sense of foreboding, is reminiscent of Carrie in more ways than one. But this matters little when pitched against Murphy’s performance. He’s electric, kinetic, dazzling in his physicality; never still, he fills the huge space with ease.

Reviewed for Exeunt
Posted by Interval Drinks at 4:59 AM No comments: 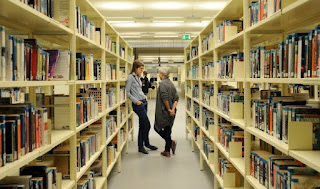 We are sitting in a quiet corner of Birmingham Central Library, surrounded by the sloped spines of paperbacks. Around us there are people milling about, mindful of the library silence, casting their eyes across the shelves. The stories that encircle us belong to everyone and yet, when you open the pages and lose yourself in them, they – briefly, fleetingly – belong only to you.

Mette Edvardson’s contribution to the Fierce Festival is inspired by Ray Bradbury’s Fahrenheit 451. In the dystopian America of Bradbury’s novel, books are outlawed, something to be feared, a threat removed through burning. Some people hope to preserve the stories within them by learning them by heart, committing the contents of the book to memory.

This is what Edvardson has been asking people to do, to make these books a part of themselves, to become volumes in a living library. Visitors to the library are greeted at the entrance by their chosen ‘book’; a suitable perch is found somewhere among the stacks and the story-telling begins. It’s not quite the same as being read to, though it’s an equally intimate experience, sitting side by side engaged in the sharing of stories. Nor is it quite the same as listening to a monologue, though in some ways that’s exactly what’s happening and there is an undoubted performative aspect to the experience.

The first book I meet is Bali Rai’s (Un)arranged Marriage, a contemporary first person novel, given voice by Aaron Virdee. He chose to become this book, he explains, because some of the experiences and characters it depicts struck a chord with him. He speaks the words with care and warmth, giving life and shape to the book, making me sorry when it ends. Edvardson herself has chosen I am a Cat by Soseki Natsume and while her retelling is crisper, it’s no less compelling and again there is a jolt when she draws to a halt.

The process of memorising is vital to the piece. The performers are not reading the words, the words exist within them. And it is very much a process: the act of memorising such large, uninterrupted chunks of text requires commitment, continuation. The words can fade if not spoken often; it is by no means a permanent acquisition, and the books need to be communicated to people, passed on, if they are to be retained.

Other novels and stories on the list include Bartleby The Scrivener by Herman Melville,Fear and Loathing in Las Vegas by Hunter S. Thompson, The Trial by Franz Kafka, Crash by J G Ballard, and Aesop’s Fables. This last choice is telling. The piece evokes a pre-literate world when stories only survived through a process of oral communication, repetition and re-telling: Aesop’s Fables were transmitted in this way. It also makes you think of books as subversive, thrilling things, coded objects, with the potential to excite and incite those who come into contact with them.

Edvardson succeeds in making you think of books both as a physical objects and as vessels. There’s a potency that comes from setting it in a library too, where the act of speaking out loud creates something of a frisson and the books are often a little bruised and bent, well-travelled volumes, pages that have been read and re-read countless times. It reminds you of the vital role a library can (and should) play in a society: all these stories, all these words, all this power, just waiting on the shelves, to be borrowed, to be read, and to be loved.

Reviewed for Exeunt
Posted by Interval Drinks at 2:12 PM No comments: