Somewhat belatedly I'm posting a link to my interview with Filter's co-artistic director, Ferdy Roberts, who's currently playing Puck in the company's gleefully chaotic production of A Midsummer Night's Dream at the Lyric. He talks about the differences in creating Filter's text-based and devised work and gets excited about the prospect of messing about with Shakespeare. Read the rest over at Exeunt.
Posted by Interval Drinks at 9:07 AM No comments:

The Heresy of Love at the Swan Theatre, Stratford-upon-Avon 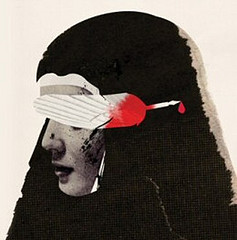 A woman born with the gift of poetry was, according to Virginia Woolf, until ever so recently, “a woman in strife against herself.” The world did not permit her to pick up a pen. And if she persisted to kick against the way of things, to write despite all the obstacles stacked against her, she was usually met with suspicion, distaste, and ridicule. To stand any hope of living a creative life, a woman needed space, time and money: that elusive room of her own coupled with considerable strength of will.

For Sister Juana Ines de la Cruz, the seventeenth century poet and playwright, her room took the shape of a nun’s cell. For her the convent was both a confining and a freeing place. Though physically caged, living out her life behind gates and bars, she was able to study, to feed her intellect, to achieve a form of independence and amass a significant library, not just texts of theology and devotion, but of the whole world and its workings.

She was well liked at court where her play, House of Desires, was performed and she was a particular favourite of the Vicereine. But though she also had her supporters within the church, she had – inevitably perhaps – her detractors, those who were alarmed by the idea of nun writing secular poetry and works of entertainment, who were wary of the idea of a woman writing in any form. Helen Edmundson’s play for the RSC is alert to the complexities of Sister Juana’s predicament: the divisions between church and court and between Spain and what was then still New Spain, now Mexico. For a long time her creativity was tolerated, encouraged even, but the special status accorded to her sparked disquiet both within the convent and beyond its walls. Eventually she was obliged to halt, to lay down her pen, stem the flow of words and renew her vows.

As Sister Juana, Catherine McCormack is passionate, yet serene. She is a woman driven; writing is part of her nature and to not do so would be to deny some vital aspect of her character. Though McCormack’s portrayal is radiant and intelligent, it is not an unshaded performance: there are un-nun like traces of vanity and pride in her too, a thirst for acclaim. She is most at ease in the company of Catherine Hamilton’s Vicereine and together they convey the intensity of the women’s friendship, their need of each other and understanding of one another as women both isolated by circumstance.

The play’s male characters are more broadly drawn. Geoffrey Beevers is kindly and warm as the full-hearted Father Antonio, a man who despite his affection for Sister Juana is easily cowed and swayed. Raymond Coulthard plays the duplicitous Bishop whose admiration for Sister Juana turns to repulsion when he finds himself becoming attracted to her. Stephen Boxer is suitably stern and threatening as the hair-shirted Spanish Archbishop who views Sister Juana as an affront to his faith and can barely bring himself to look on a woman for fear of being in some way tainted. It is in Boxer’s character that the play’s modern parallels are made most explicit: in any society peopled by authority figures who view women as a source of corruption and contagion, the act of writing becomes a subversive and powerful one.

Nancy Meckler, who previously directed House of Desires during the RSC’s 2004 Spanish Golden Age season, gives the material a solid if over-emphatic production. A retractable gate is used to convey a sense of Sister Juana’s cloistered existence, but it also helps to keep her distant. Though never less than compelling, at almost three hours in length the play occasionally sags (a sub plot involving Sister Juana’s niece is rather drawn out), the constant rattling back and forth of the separating gate eventually becomes repetitious and the staging itself is a little flat and unadventurous. The otherwise simple set, dominated by Christ’s looming face, is beautifully lit by Ben Ormerod – the stage suffused with soft golden light, evening sun – but it’s McCormack’s performance that gives this play its heat.
Reviewed for Exeunt
Posted by Interval Drinks at 2:13 AM No comments:

She Stoops to Conquer at the National Theatre 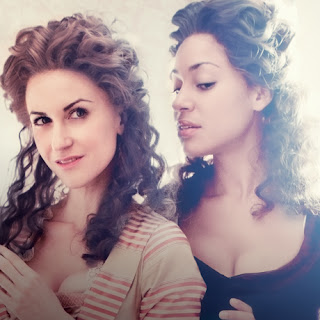 Oliver Goldsmith was not reputed to be a great conversationalist. Dr Johnson remarked that “the misfortune of Goldsmith in conversation is this, he goes on without knowing how he is to get off.” Surrounded by the great talkers of the age, ‘Noll’, with his fondness for fine things and his funny, sunken face, tended to gabble and was the subject of mockery and affection in equal measure.

Marlow, the dandyish protagonist of Goldsmith’s frothy 1773 comedy, is also socially ill at ease, at least in certain circumstances. Presented with a woman of fortune, his tongue ties itself in knots and he becomes so overcome he can barely bring himself to look her in the face; show him a comely barmaid however and he turns into Blackadder’s Flashheart in a lemon yellow frock coat, all thrust and trouser. So in order to snag her prize (or at the very least have him look at her), Kate Hardcastle, the daughter of a country squire, decides to adopt a broad accent, an apron and a playful manner, something she is only too happy to do.

Though he’s a keen observer of snobbery and pretension, Goldsmith’s play is intriguingly free of malice or cruelty, his satire soft-edged. The characters, though flawed, are all amiable in their way, and even the central misunderstanding, in which Marlow mistakes the Hardcastles’ home for a country inn and his potential father-in-law for its landlord, is the result of a mischievous rather than malicious prank. The humour comes as much at the expense of the town fops as the country folk and even Kate’s spoiled, layabout half-brother Tony Lumpkin is not a bad sort, not really.

The playing is by necessity pretty broad. There is little room for nuance here, but some lay it on thicker than others. Harry Hadden-Paton and John Heffernan make a sublime double act as Marlow and his friend Hastings, the two city interlopers. They give the impression of friendship – there’s a scene where the two are eating fruit where they spark wickedly off one another – and, Heffernan in particular, conveys a sense of basic decency and concern for Marlow’s happiness.

Steve Pemberton resists the urge to turn the eccentric Mr Hardcastle into a League of Gentlemen grotesque and is instead genial and (mostly) good-humoured in the role; this is in stark contrast to Sophie Thompson’s performance as Mrs Hardcastle, which is so far over the top that the top is now just a little speck in the field below. She is less a character than a collage of Tourettian facial tics and extravagant vowel-mangling in attempt to demonstrate to her guests that she is not just another one of the ‘rustics.’ Katherine Kelly takes a far more naturalistic approach as Kate, suggesting that her ‘barmaid’ persona is an existing facet of her character and, as a result, lessening the sense of deception in her behaviour. The production also sidesteps the slightly murky aspect of Marlow’s thirst for women lower down the social ladder than he.

These fluctuations of tone and pitch eventually start to have an effect on Jamie Lloyd’s production, which feels less cohesive than it might. But what it lacks in tightness and lightness it makes up for in occasional joyous flourishes, in well-staged musical interludes, in the interplay between Hadden-Paton and Heffernan (there can be few actors who can milk as much as he from a single utterance of the word ‘booby’) and in its abiding sense of generosity and warmth.

Reviewed for Exeunt
Posted by Interval Drinks at 8:37 AM No comments: