Two very different fringe shows occupied my time last week. First up, was Theatre 503 and their latest show The Atheist, a monologue by Ronan Noone about an amoral journalist. Now one of my pet hates has to be the standard caricature, still trotted out with some regularity, of the journalist as evil incarnate, completely void of principles and willing to sell their own kids for a story. It’s the laziest kind of writing. But though he’s undeniably one of humanity’s more ‘flawed’ products, Augustine Early, the (anti-)hero of The Atheist has enough going on as a character to raise him above this level. Noone has a winningly filthy imagination and understands how to sculpt a character from a few minimal details. The play itself is the tallest of tales, all sex scandals and blackmail, plus a particularly novel, bedroom-related use of a bungee cord. As Early, Ben Porter does a decent job, though on the night I saw him, he tripped over his words a fair few times in the second half, just managing to pull things back from the edge. It’s a verbose role to be fair though, a challenge for any actor.

Later in the week The Stage sent me over to the Arcola to see Jack Shepherd’s jazz club-centric play Chasing The Moment. This was an ensemble piece about a jazz quartet struggling against changing musical tastes. The actors all played their instruments and the interval was used to stage a brief (and pretty decent) set. It meandered a bit in its desire to let every character say their piece, to have their solo as it were, but the performances kept things moving, particularly Clifford Samuel as a young drummer who worries about not having the approval of his strict West Indian father.

After all that, theatre had to take a backseat on the weekend; I had a couple of friends, the Gin Soaked Boy, L&D, the usual lot, over to dinner, with me on kitchen duty since Lisa was elsewhere. Given how limited my culinary range is (and that I consumed almost an entire bottle of Sauvignon Blanc purely in the prep stages last time I offered to cook for anyone), I was pretty nervous. And though I kept things simple – you can’t go wrong with pasta (well I probably could, but I was hoping I wouldn’t) – I still fretted a bit that everything would somehow conspire to go tits up. I was especially worried about how I would navigate the whole vegeterian/kosher/nut allergy hurdle that feeding the five of us presented me with. In the end it was a reasonable success though, or at least I thought so – food got eaten, drink got drunk, nobody went into anaphylaxis – and I enjoyed playing host. Must repeat in the near future.
Posted by Interval Drinks at 6:33 AM No comments: 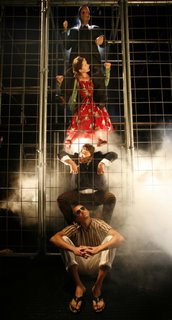 Long time, no blog. Spent much of the weekend down in the suburbs for my mother’s birthday do (and much of the week beforehand fretting over the details of said do) but it all came together nicely.

Last week was very Shakespeare-heavy. On Monday I went to see the RSC’s Antony and Cleopatra, now at the Novello. It was a gripping production with some strong performances, but the play itself I found problematic. W H Auden said that if he could save just one of Shakespeare's plays, it would be this one, but I really don’t see the appeal. Shakespeare’s Egyptian Queen behaves for the most part like a spoiled teenage girl in the midst of an adolescent passion; this isn’t a woman I understood or cared about, despite Harriet Walter’s best attempt to give her a certain dignity. Patrick Stewart made a highly charismatic Antony, but actually I thought John Hopkins’ Caesar made an equally strong impression. This production came to London trailing glowing reviews; I'm usually wary of buying into such hype, but the critical reception had been so unanimously warm I was rather excited about having secured tickets. And inevitably my expectations were inflated as a result. And while this A & C didn’t exactly leave me reeling, it certainly had its strengths - I could see what all the fuss was about, despite the fact that the play itself is not destined to become one of my favourites.

On Thursday I went back to the Hammersmith Lyric with website Clair to see the new Kneehigh production of Cymbeline. Now, as I may have mentioned once or twice in the past, I absolutely adored their production of Angela Carter’s Nights At The Circus. And this new work proved to be equally dazzling and inventive, if not quite so moving. Scrapping most of Shakespeare’s verse, but retaining the framework of the plot, Emma Rice’s production was overflowing with inspired details. As with Nights, there was much live music coupled with a strong sense of warmth and wonder – plus the sight of the tiny Hayley Carmichael, as the tormented Imogen, disguised as a hoodie called Ian. Her performance was so sweet and endearing - perky without being irritating (not easy to do, I suspect). Given the liberties it takes with the text, I suspect it’s a love it or hate kind of show, but if you know Kneehigh and like what they do you should definitely try and catch it while it's in London. It’s quite brilliant.
Posted by Interval Drinks at 5:48 AM No comments:

Well, it’s been a while since I last posted. I thought some more about putting together an end-of-year best-of list to put on here, but in the end decided against it. This is was partially down to festive procrastinating, mainly based around chocolate consumption and the fact I was given Murakami’s The Wind Up Bird Chronicles for Christmas and have spent every spare moment since dipping into it. The odd hangover may have played a part too. But mainly down to what I felt was the pointlessness of the task – there were a lot of supposedly important shows that I missed, some because they weren’t my cup of tea, some I will attempt to catch up on this year if I can – but, while it’s impossible for one person to see everything, it does rather impact on my ability to pick an over-arching best-of. Plus the time-banding is rather restrictive: one of the best things in a long way, I saw in 2006 was Deavid Eldridge’s Festen, which I finally caught on tour at Richmond Theatre – in fact my eagerness to tell everyone how brilliant I thought it was, was one of the things that prompted me to start this blog. Trouble is, having been around for some time, first at the Almeida and then in the West End, it's hardly a 2006 show.

Anyway - the venue that made me happiest last year was, without a doubt, the Orange Tree in Richmond. Every show I saw there engaged me in some way, from the fluffy delights of The Pirates Of Penzance to their staging of Ben Brown’s Larkin With Women which, for various reasons, left a major impression on me. My favourite single scene of any production was that wonderful moment in the Arcola’s production of Yerma when the village women gathered together to wash their clothes and a perfect synergy developed between their onstage actions and the percussive backing music. Huge arcs of water filled the air and the sheer energy of the moment reminded me why theatre is still such a vital and wonderful medium, an experience unlike any other. Running a close second, was the haunting closing scene of Kneehigh’s Nights At The Circus at the Lyric, as Fevvers and Gisli Orn Gardarsson’s Walser spun in mid-air, reaching for each other, clinging to each other; sometimes I find physical theatre techniques can trample the narrative, but in this case they worked in perfect harmony with Angela Carter’s rich and magical source novel.

In the absence of any Big List, I thought I’d at least share my theatre resolutions for the year.

1) I will attempt to be less lazy. I told pretty much everyone I know that I was determined to see The Life Of Galileo at the National before it finished its run, and did I go? No. Despite it being part of the Travelex £10 season and being at my favourite venue. I really regret missing it, as nearly everyone I’ve spoken to who did see it, loved it.

2) In a similar vein, I will make a real attempt to see productions of plays I haven’t seen before (something I’ll be doing next week in fact – I’m down to see both the RSC's Antony and Cleopatra and Kneehigh's Cymbeline, neither of which I’ve seen on stage before).

3) I will try and see more productions later in the run. Press nights have their perks undoubtedly, but seeing a play surrounded by critics and the cast members’ mums doesn’t really reflect the reality of going to the theatre. When you see a play gradually connect with a gang of rowdy teenagers who’ve been dragged along by their teacher, as Roy Williams’ Little Sweet Thing did so well when I saw it on a weekday matinee, nothing quite beats that.

4) If I’m going to see a production on the weekend, I will phone and check just exactly what sections of the underground they are digging up that day, or I’ll just leave with an extra hour to spare even if it means sitting in the theatre bar for an age beforehand (not exactly a chore) – I have no intention of repeating my experience at the Bush in November.

5) If I go back to the Menier Chocolate Factory I will not do so on the hottest day of the year. Twice I’ve found myself slowly melting in what I’m sure is an otherwise lovely venue. (This year I learned my lesson and packed a little Chinese paper fan, while my fellow audience members struggled with those little battery-powered ones they were handing out on the door).
Posted by Interval Drinks at 4:45 AM 2 comments: