Twelfth Night at the Roundhouse 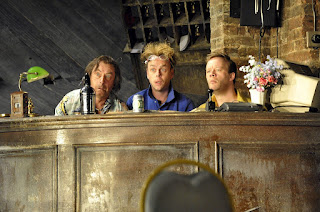 An antiquated slam-door lift, a revolving door, a scattering of battered lobby sofas: David Farr’s Twelfth Night – the second instalment in the RSC’s Shipwreck Trilogy – is set in a hotel, which makes a superficial sense: this is a place where the people of the world wash up and interact, a place of transience and displacement. Jon Bausor’s set has the trappings of 1920s New York establishment, a touch of faded art deco glamour, but everything is askew and decaying; water laps at the floorboards, a bed rests near vertically against the back wall – it is as if a storm has raged through the place.

It’s an intriguing thematic canvas but its potential is never fully exploited – though that lift gets a good work out. Farr’s production is, instead, one of broad laughs and pratfalls. Belch and co indulge in the obligatory drunken carousing – complete with disco lights – and Kirsty Bushell’s rather manic Olivia soon trades in her veil and her mantle of mourning for more earthly pleasures.

In the midst of all this, Jonathan Slinger gives a deliciously scene-eating turn as Malvolio. He is the very picture of buttoned up pomposity, his pale hair slicked to his skull, every follicle regimented, his nose held permanently aloft, his gaze withering. A mixture of the monkish and the managerial, he is officious with his clipboard, part Hitler youth, part snooty otter. He’s the type of man who wears a corporate name badge at all times, even on his dressing gown. When he emerges on stage lavishly cross-gartered (after descending in the rickety lift), he sweeps backs his blazer with a flourish to reveal the kind of outfit only available from specialist retailers before pursuing Olivia around the stage with creepy insistence. It’s a cheap scene in many ways, a heavy-handed device, but one which Slinger manages to make psychologically plausible – and very, very funny.

The trouble with his performance is that it leaves the rest of the production looking flat and patchy. Emily Taaffe is rather underpowered as Viola and Farr oddly chooses to make little of the obvious physical mismatch between her and her ‘twin’, Stephen Hagan’s Sebastian. Jonathan McGuinness’ strangely uncharismatic Orsino also fades into the background and there’s little sense of attraction between him and Viola; when he claims her at the end it feels like a bit of an afterthought. Bruce MacKinnon is a far more endearing presence, playing Aguecheek as a Tim Nice But Dim type, posh and gangly with wide, kind eyes and a shock of blonde hair. Kevin McMonagle’s melancholy Feste handles the songs well – the music has been inventively reworked by Adem Ilhan – but seems less comfortable at other times, an old school comedian out of time and given to mumbling.

Though there are individual comic scenes that really work on their own terms, the production feels tonally inconsistent and the relocation to this dilapidated hotel world thematically superfluous. Slinger’s nuanced, exposing, and often hilarious performance as Malvolio would stand out in any production, but here – where everyone else seems to be drawn in the broadest of lines – he towers.

Reviewed for Exeunt
Posted by Interval Drinks at 2:46 PM No comments:

Democracy at the Old Vic 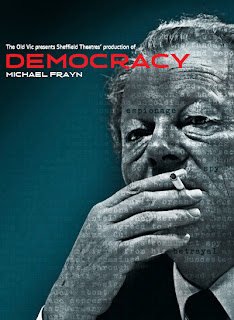 Written in 2003, Michael Frayn’s Democracy depicts the intriguing relationship that developed between two men, Willy Brandt, the West German Chancellor for much of the 1970s, and his assistant, Gunter Guillaume, who while seemingly devoted to his boss was later exposed as a Stasi double agent.

Though physically and politically they initially seem to be polar opposites, the two men are more alike than they first appear and the play explores the curious bond that builds between them over time. There is, of course, a broader metaphor at play here about Germany as a divided country – a land cleaved in two but still connected – but it’s the substance of the men’s relationship in which Frayn’s dense, layered play seems most interested, though in a kind of clinical and rather detached way.

Brandt is a charismatic leader who understands the potency of the big symbolic gesture, but he also has a tendency towards black moods, bouts of insecurity and is a notorious womaniser to boot. Guillaume is permanently rumpled and crumpled, something of a comedy figure, but someone who clearly excels at his job. But despite their superficial differences, the men have many things in common. Both Brandt and Guillaume were exiles, they were both also fatherless, and – perhaps as a result – very driven and committed. While his convictions never falter, Guillaume grows incredibly fond of the man he is spying on and Brandt comes to depend on Guillaume in more ways than one.

Paul Miller’s production was originally staged at Sheffield’s Crucible Theatre as part of their Michael Frayn season, alongside productions of Copenhagen and Benefactors, but it feels oddly remote on the Old Vic stage, marooned against the black, back wall. There’s a static quality to the piece and it doesn’t really hit its stride until the two men are united on a train touring the country and the relationship between them starts to evolve.

There’s a pleasing John le Carré-esque quality to the atmosphere evoked, all muted 1970s colours, secret dossiers, and intrigue, wreathed in cigarette smoke. But there’s something flat and inert to the staging, a lack of momentum – even when the characters are travelling by train this stillness prevails. Though the all-male ensemble cast do a good job of fleshing out the world of the play, the production is at its strongest when it’s just the two men together, on a family holiday in Norway.

Aidan McCardle is an endearing presence as the bushy-haired Guillaume, talkative in a nervous way; a figure one might so easily overlook and underestimate, the “hat stand in the corner” in his ill-fitting suit, with his shirt collar always a little askew. The collision between his political beliefs and his personal feelings is subtly but convincingly conveyed. Though Patrick Drury never quite comes across as the larger-than-life figure the other characters paint Brandt as, he, with equal subtly, conveys the divisions between Brandt the politician and Brandt the man. Ed Hughes, in the obligatory polo neck and leather jacket, provides a necessary textural and temperamental shift away from all those suits as Arno, Guillaume’s contact in the East.

The play is intellectually exciting and never less than engaging; the lines about the troublesome nature of coalitions have also acquired an unintended resonance. It’s easy to see why Miller opted for this stripped down style, foregrounding the text, but the human drama at the heart of the play gets a little lost against that vast, flat expanse of black.

Reviewed for Exeunt
Posted by Interval Drinks at 2:42 PM No comments:

In and out. In and out. A pulse. Like sex, like breath. A man and a woman sit facing each other, physically distant but intensely connected, with hunger in their eyes. They taunt each other, tease each other, joust and spar. Their weapons are words: sexual, charged, violent yet also tender. They describe fantastical happenings, island adventures, bedroom explosions, fractured and layered, wild and exuberant but never entirely untethered from reality.

In contrast to this verbal battle royale, Ridley depicts the couple’s first tentative meeting at a country-house party, a world tinged with loss and pain, an aching place. He roots their fantasy landscape in the real, anchoring their passion in familiar things. They find their escape in one another. Catharsis comes through the sharing of stories. The bond between them is a constant. No matter how aggressive their language, how violent their fantasies (with their lubricated grenades, with their copper wire and garden shears) there is a connection, an abiding affection, a mutual sense of tenderness and concern.

David Mercatali’s stripped-down duet is kinetic and poetic in equal measure. Both Tom Byam Shaw and Lara Rossi give performances of immense energy. Shaw sprints backwards and forwards across the wide, white space of the stage, slaughtering imaginary serpents, thrusting and diving until the sweat is pouring off him. It pools in the hollow of his collarbone, pearls in his hair, drips from the tips of his beard until he collapses to the floor, red-cheeked and breathless: utterly spent. Rossi’s performance is less full-throttle in the physical sense but no less charismatic. She stalks and struts, shimmers, roars.

The two-hander returns to Southwark Playhouse cresting a wave of recent Ridley productions, including the premiere of his latest play Shivered at the same venue and an astonishing revival of the brutal, brilliant Mercury Fur which earned a deserved transfer to the Trafalgar Studios. This is the second cast to star in Mercatali’s production and he plays to the performers’ individual strengths, intensifying the chemistry between them. The stage is bare except for two chairs at opposite ends of the room and two bottles of water. It’s part combat arena (and, even though the dimensions are completely different, in this regard it brings to mind the bespoke playing space for Mike Bartlett’s Cock), part blank canvas, part virtual landscape.

Though the couple circle each other constantly, springing off one another, colliding and clashing as they negotiate the traverse stage, Mercatali only allows them to come together at the end – to wrap themselves in each other’s heat, to sink into each other’s skin, to lose themselves completely – before they pull apart and the circle begins again.

Reviewed for Exeunt
Posted by Interval Drinks at 1:10 PM No comments:

Through a Pool of Tears


A piece of blurb-verse formed from this year's (already somewhat torn, battered, blotted and biro-stained) Edinburgh Festival Fringe programme. Read the full piece over on Exeunt.
Posted by Interval Drinks at 5:16 AM No comments: