The Beauty Queen of Leenane at the Young Vic 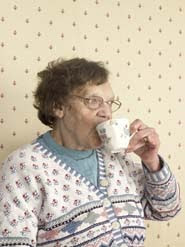 The mother-daughter relationship at the heart of Martin McDonagh’s debut is one of Beckettian repetition. The elderly Mag, sits slack-mouthed and lumpen in her chair, forever demanding that her daughter, Maureen, make her Complan without the lumps or ‘do her a tea’ while the daughter, harried and resentful, stamps around, seeing to her needs.

First seen at the Royal Court in 1996, this is the first major London revival of this bleak, black play. It’s very entertaining piece yet almost gleeful in the way it sets up the characters for an ugly denouement; there’s something rather nasty at its heart.

The two women live in a crumbling village in Connemara where it seems to be permanently wet outside and Australian soap Sons and Daughters runs on an endless loop on the television. Mag sits on her chair and makes her demands, causally undermining her daughter whenever she can. Maureen attempted to leave once, but her stint as a cleaner in England ended unhappily and now she’s back home, stuck with her mother, making endless bowls of porridge.

McDonagh slowly feeds the audience information about their relationship until it becomes apparent that things between them may be more mutually destructive than is initially apparent.

Maureen glimpses escape in the form of local man, Pato Dooley, who clearly has an eye for her. McDonagh, a confident and capable manipulator, makes it understood that Mag won’t stand for this. A letter plays a pivotal part in the plot and McDonagh teases the audience with it, dangling the chance of release over Maureen’s head and then reeling it back in. It's obvious from the get go the letter won't reach its intended target and McDonagh draws this situation out as far as he can. Director Joe Hill-Gibbins creates a suitable air of tension and, on more than one occasion, the audience gasps with genuine shock and repulsion, having been made to invest in characters who then go on to do appalling things to one another.

Rosaleen Linehan is superb as the monstrous mother whose cruelty is not of the calculated kind, rather the result of selfishness and sloth; her timing is spot on and this is evident in every line she delivers, every malicious dart of the eyes. Susan Lynch’s performance is equally well-pitched though she’s a luminous actress and isn’t quite able to play this down, is never quite as plain and dowdy as the script demands.

David Ganly and Terence Keeley, as Pato and his ever-exasperated teenage brother, both provide endearing supporting turns and the characters’ rain-lashed, remote existence is well-conveyed by Ultz’s detailed set, a perfect evocation of their decaying, time-immune cottage, with a photo of the Kennedys on the peeling wall and box upon box of Complan in the cupboard.

This is a well-judged revival, funny but unsettlingly so; yet while it doesn't exactly shy away from the play’s horrific aspect, it does seem to blunt some of the more jagged edges. This is intensified by the fact that McDonagh is now well-known for his use of shock tactics. You know there will be blood, you know it will end messily; it's just a question of when and how.

Reviewed for musicOMH
Posted by Interval Drinks at 3:36 AM No comments:

This took place a couple of weeks back now and I really honestly did mean to write about it the following week, but then a friend came to stay and I had some other worky things to attend to and, oh, I don't know, stuff just happened, and somehow suddenly it is midway through July and I feel that if I don't write down some brief words now then it will drift from my head altogether.

This was the third Miniaturists I'd attended at the Arcola and, of those, probably the strongest line-up to date. Of the five short pieces on the bill, there were three that really stood out. Smile, by Simon Treves, was a wonderful exercise in unease set in a prison that managed to be both very funny and incredibly tense, sometimes simultaneously.

Helen Smith's The Memory Man, a short play about a medium, was the most ambitious piece and the one that had the most potential to be built on and extended into something longer. It had an intriguing symmetry, was full of lovely lines and details and managed to remind me of many things that I've read and seen and enjoyed while also having its own distinctive voice - plus it's always exciting and gratifying when someone you know and like produces something you find yourself really enjoying and admiring.

The final piece. Postfeminism, by Samantha Ellis (who also wrote the well-received Cling to Me Like Ivy) was a lovely example of romantic comedy writing. Witty and clever and genuinely touching, it managed to convey the whole journey of a relationship in a very short space of time. It also contained a properly groan-inducing pun of the very best kind.

All the pieces were incredibly well performed by casts whose rehearsal time was limited to say the least and the whole experience made all the various grapplings with public transport it required to get there more than worth it. The West End Whingers do the thing more justice over here.
Posted by Interval Drinks at 8:27 AM 2 comments: