In The Heights, Southwark Playhouse 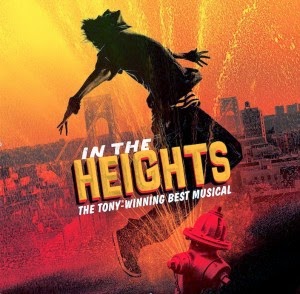 Lin-Manuel Miranda’s musical, a multiple Tony-winner which opened on Broadway back in 2008, is a large-hearted affair. Set in New York’s Washington Heights, a neighbourhood with a large Latin American population, it charts the stories of a number of characters, different generations of immigrants and their American-born offspring – money worries, family strife, love both requited and not – over a number of sticky city nights.

There’s a gentleness to all this, a sense of affection. The harsher side of urban life is not up for dissection here; despite the heatwave, this isn’t Do The Right Thing. Miranda is keener to explore the way immigrant communities work, the interconnectedness, the support network; this is undercut only by the poignant feeling that ever-rising rents will soon start to have an impact on this way of life, diluting things, forcing people to move out and apart.

Luke Sheppard’s London production captures the show’s energy, its capacity for uplift. It’s a deliciously vibrant production, the stage an arena for Drew McOnie’s often dizzying choreography. The music meanwhile is a mix of Latin sounds and hip-hop influences. The lyrics are consistently smart and funny, even if the sound quality means that some of the zippier lines get lost.

The performances are nicely judged, giving necessary shape to a large cast of characters, some drawn in marker pen, others in fine-liner. The heart of the piece is provided by Sam MacKay as the good-natured bodega-owner Usnavi, a decent guy who feels a little adrift following the death of his parents. Not that he’s lacking in family, the production makes clear, not with Eve Polycarpou’s Abuela Claudia and Damian Buhagiar’s mouthy young Sonny living nearby. Everyone looks out for one another in this neighbourhood; book-writer Quiara Alegria Hudes makes it clear that this comes at the cost of privacy – everyone knows each other’s business too and a girl can’t drop out of university without everyone soon finding out about it – but the production, in the main, is a celebration of community.

The set, a mix graffiti tags and corrugated metal, is relegated to the back wall, so that Sheppard and McOnie can fill the Southwark Playhouse stage with popping bodies and twirling skirts. There are a couple of stand-out sequences – the dramatic double of ‘The Club’ and ‘Blackout’ which ends the first act among them – but the production as a whole has a cumulative cheering effect, drawing the audience in, lifting them up.

Admittedly there’s not a huge amount of room for nuance when it comes to character though David Bedella does a good job of conveying paternal turmoil, as a hard-working man determined to do well by his family. That’s not to say the production is without emotional texture; while the plotting is predictable – Usnavi’s sold one of his customers a winning lottery, where might this be leading? – and there are few hard edges of which to speak, the tone is rarely cloying and a couple of moments are genuinely and unexpectedly moving in their exploration of what it is to move to another country in search of a better life, to leave one family behind only to find another.

Posted by Interval Drinks at 2:02 PM No comments: 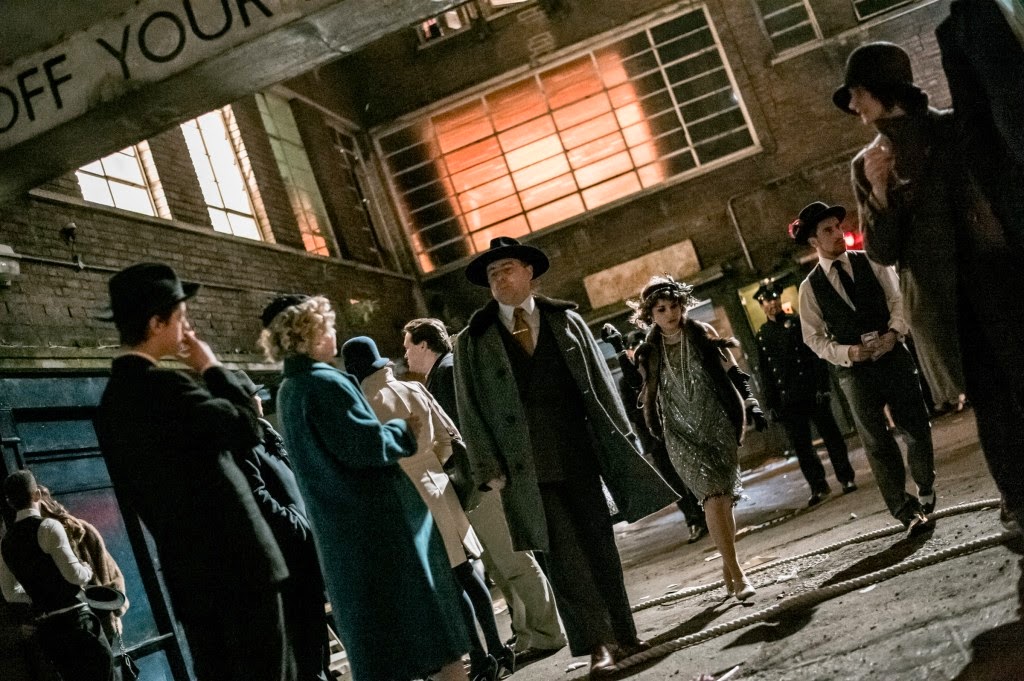 After attempting something slightly different with their not so secret tie-in with Wes Anderson’s newly released The Grand Budapest Hotel – discussed in more detail here – the Secret Cinema team have pitched back into the black for their latest event.

The air of mystery is obviously a huge part of the process, the seeding of clues on social media – in this case a few evocative quotes and some details about an American mayoral campaign – is a key part of the experience. Once you’ve acquired your ticket, you’re assigned a ‘character’ and are told the location and given the dress code for the evening, but they still keep it zipped when it comes to the name of the film. While there’s much fun to be had in trying to unpick all this, there’s also the pressing question of what happens if the film turns out to be one you don’t like? Will it still be an experience worth having? A willingness to gamble certainly comes in handy (in more than one way, it turns out).

They’ve been doing this for a good few years now, tweaking things along the way but the concept remains the same. You’re buying a ticket not just to see a mystery film, but to participate in an immersive experience inspired, both directly and indirectly, by the world of that film. They’ve done Blade Runner and The Shawshank Redemption in the past, while recent experiences have been based on The Third Man and Terry Gilliam’s Brazil; for the latter a vast disused office building in Croydon was transformed into the headquarters of a shadowy corporation but the results received quite a mixed response from audiences, the chief complaints being that the space was just too large and the cinema part of the experience – the screening of the film itself, on a series of small television monitors and projected on the side of the building – felt like an afterthought.

It looks like they’ve taken at least some of the audience feedback on board. Secret Cinema 21 seems more manageable in scale than their take on Brazil. You have the best part of two hours to explore the space before the screening, with time for further carousing afterwards. It helps that they’ve snagged a peach of a building for this one, a beautiful historic venue with its own array of secrets. They’ve also sourced some gorgeous things with which to furnish it and the whole space is attractively wreathed in whisky mist. But while it’s tempting to make comparisons, this isn’t Punchdrunk and the level of detail isn’t quite up to their standards, you soon start to spot the duct tape covering up wires, the cheap paper table cloths, the fact that the dollars have clearly been printed by photocopier. Small details, but ones capable of pulling you out of the world. Some of the rooms are dazzling, particularly those which made the most out of the building’s original art deco features and the grand central staircase, others feel a bit empty.

While Secret Cinema don’t really market what they do as being ‘immersive’ theatre in the conventional sense, the performance element is fairly central to the experience. You are given identities and tasks are assigned on arrival, usually involving tracking down various characters to squeeze them for ‘information.’ This has the effect of making you explore the space fully, racing up stairs and into basement drinking dens, sidling up to people by the roulette table, but I would definitely have appreciated a greater degree of narrative clarity, a bit more in the way of incentive; there didn’t seem to be much at stake over whether or not you completed these tasks, apart from the acquisition of more photocopier dollars.

Whereas Punchdrunk at its most enchanting feels like entering a dream world, it’s essentially a solitary experience, with the other masked figures (and their pointy elbows) part of the alien landscape, Secret Cinema is altogether more social. I took a friend, the Lawyer, who fully embraced the role-playing potential (particularly the double-dealing and bribery, the thrill of the grift), testing the interactive elements to the full. Some of the performers seemed more than capable of rolling with this, creating defined characters and having a lot of fun with it, while others seemed far less capable of keeping track of all the various micro-narratives they’d set in motion. I found myself feeling particularly frustrated when we’d finally completed our given task only to be dismissed with a hardboiled shrug. This was a recurring theme. Sure, this was in keeping with the world of the film, and made sense in that context, but it became grating after a while, repeatedly being told to ‘get lost’ or some such in a honey-thick American drawl. It also had the effect of shutting down my willingness to play.

The film turned out to be one I’ve always liked and the band and the dancing that followed was hugely enjoyable, but I found some of the interactive elements frustratingly undercooked and there was a creeping feeling of negativity that sucked the fun out of some exchanges. As an exercise in dress-up and play-acting for grown-ups, one liberally lubricated by booze – a temporary act of escape – it has a lot going for it, but I think I would have felt far more kindly disposed towards it, flaws and all, if it hadn’t felt so grasping.

This is my main problem with this incarnation of Secret Cinema. It’s currently priced in line with Punchdrunk (them again, sorry) but that’s just the start. Once inside there are numerous opportunities to part you with your green – not just bars and ‘diners’ but photographers too. The mark ups are pretty eye-watering, cocktails are OK, but £4 for a small can of warmish beer is a rip-off whichever way you paint it. The level of detail shown elsewhere seemed conspicuous by its absence too, cheap wine in cheap wine glasses at high prices, olives in plastic pots – perhaps if they’d been presented in an era-appropriate manner, if there’d been a bit more love and a little less grab, these niggles would have niggled less but as it was I became more aware of the cracks – the shoddy state of the ladies’ loos, the cloakroom attendants who seemed supremely pissed off at having to deal with wet umbrellas – than I might otherwise have been.

I had a grand time with my Lawyer, once we found each other – they have a tendency to split groups up on arrival – but a lot of that was down to how we chose to engage with it. On watching the film it was also possible to fully appreciate the little jokes, references and clues laced through what had gone before, how cleverly they’d built on tiny details and sub-sub-plots in the source material to create the world in which we’d just been playing, but this came a bit too late and didn’t quite make up for the sense of being squeezed.

Written for Exeunt
Posted by Interval Drinks at 4:32 PM No comments: