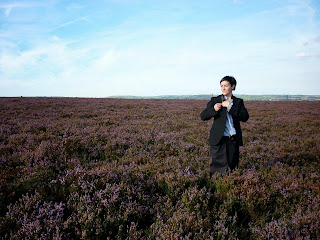 A circle is chalked on the floor, a space for spell-casting and spirit conjuring. Then the drums begin to thunder, louder, louder, and the woman in the grey suit starts to dance, a series of ritualised movements, toe and heel, arms aloft, the dance of her fathers.

Nic Green’s new show is an exploration of absence, the spaces between people. Can a relationship exist with someone who is not there? Who has never been there? Inspired by Green’s own experiences of meeting her Scottish father for the first and only time as a sixteen year old, Fatherland is about the space we create for ourselves in the world and the way we define ourselves in relation to others, even if they have never really been present in our lives.

We are played into the room by bagpipes and sit arrayed on all four sides of the space. Green begins by assembling a choir of ‘fathers’ from the men in the audience and engages them in a poetic pre-scripted exchange, a refracted conversation with a man she met only once and who she struggles to recall in any real detail, what he looked like, which pub they went to; he’s the ghost in the room, the ghost within her. Her approach is delicate, the man, and the land from which he came, are like invisible tethers tying her to something which is hard to pin down; there’s a drifting quality to the show in the beginning. At times it’s almost too cobwebby, the lilting language cloudlike and lacking in solidity. That’s perhaps the point, the absence of anchor, the sensation of floating free, but from the audience’s perspective there’s not a lot to grab onto; we drift too, but not always with her.

And then the drums kick in. A wild, tribal heart-thump; a primal, pounding sound. Green starts to dance, shedding clothes as she does so. First her jacket, than her shirt, than her trousers, until she’s bare except for her Louise Brooks bob and her tartan-tailed knickers, blue as woad. She dances with her head high, cheeks colouring with the effort and a single streak of sweat licking down her back like a second spine. Her dance combines the quality of a battle cry with the abandonment of dancing around in your bedroom when you know no one is watching, breasts bobbing, flesh quivering with each rhythmic stamp. I look around the room and people are beaming.

Then, as she slows, as the drums still, the whisky bottles emerge. Single malt. Islay. A peaty smell fills the air as we fill our glasses, passing the bottle from hand to hand, row to row. A toast is raised. A couple of people clink their glasses. Then another two, then another, and suddenly the room is filled with the music of the charged glass, as we, smoke- throated, are invited to connect with each other and with her, to share this moment.

Even when the piece is elusive and remote, as it sometimes is in the beginning, there’s a warmth to it, a sense of invitation. This is something Green excels at, having created Trilogy, a three stranded piece exploring contemporary feminism that centred on a celebration of the female form, a gloriously naked dance sequence in which Green, her fellow performers and a whole host of volunteers bared all and invited women in the audience to do the same. While the piece as whole was messy in places and somewhat front-loaded (so to speak), there was something inescapably joyous about that dance: all that jumping, stamping, shaking. The beauty of bodies in motion.

And I was up there with them, one of a hundred or so, naked on the Barbican stage, roaring and leaping, arms in the air, skin bright under the lights. It seems trite to say it, but it was freeing, putting yourself out there like that, letting yourself go; the sense of unity between the participants was strong and Green made sure that the experience was a positive one for all involved, easing us into it, making sure everyone felt comfortable. For someone who finds the idea of public speaking anxiety inducing it was as unexposed as I’ve ever felt in front of an audience and it genuinely made me examine my relationship with my body.

This piece has a similar strength, though this time Green stands alone – dances alone. It’s a more personal, inward piece, but in its roar, in its thunder, it draws its audience together.

Reviewed for Exeunt
Posted by Interval Drinks at 2:58 PM 1 comment: