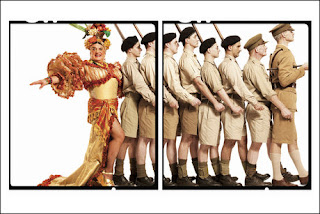 It’s fairly easy to grasp why Michael Grandage wanted to begin his five play season in the West End with Peter Nichols’ 1977 military comedy. It has a brilliant, glittering central presence in the character of Acting Captain Terri Dennis. Simon Russell Beale gets to glide about the stage in armour-plated undergarments and don a series of increasingly elaborate costumes, toting a Carmen Miranda fruit bowl on his head, straddling a chair in stockings and top hat, dabbing on the “day slap” and batting his mascara-black lashes. He’s flamboyant but far from waspish, kind-hearted and soft-eyed, a paternal figure even when sporting an epic Lady Bracknell bosom and a daft Vera Lynn wig.

Nichols’ partly autobiographical play about his days entertaining the troops during the Malayan Emergency – not a war, definitely not a war – depicts what happens when Steven Flowers, an inexperienced young private, joins SADUSEA (the Song and Dance Unit of South East Asia), half of whom are reputed “bum-boys.” Russell Beale’s Terri is the lead queen, brave and unapologetic about who he is, feminising everyone’s names with abandon (Clementina Attlee and so on) and raising an eyebrow at every even mildly suggestive remark. As well as being peppered with double-entendres, the language of Nichols’ play is riddled with off-hand racism – wogs, chinks and the like – and sexism, which though true to the time and the characters, doesn’t sit easy.

That said, the play is an intriguing portrait of the tail-end of empire: corruption and cynicism permeate, the air is thick with gin and mosquitos, and the senior ranks are suitably clueless while those lower down the ladder suffer the consequences. Bonds form between the men that may not have been possible at home, and the sense of camaraderie, closeness and even love that develops within the unit is gently conveyed. An attachment forms between John Marquez’s expletive-spitting Corporal Len Bonny and Harry Hepple’s Lance Corporal Charles Bishop, but tender as it is, it comes quite late in the day and, as such, it doesn’t have the emotional resonance it might.

The action is interspersed with songs, which are charismatically performed and invested with wit and charm by Russell Beale, but they’re essentially there to let Terri don yet another astonishing frock; very often they break up the narrative flow rather than moving things forward. While the standard of playing is decent enough, apart from SRB the only performance that really makes an impression is that of Angus Wright as the zealous and ever so gung-ho, Major Flack, who happily packs the men off to the jungle where danger awaits. He’s got a rich, sonorous voice of which Grandage makes full use, but when these two are off stage the pacing tends to dip and the production feels every minute of its near three hour running time. The first half in particular seems to take an age to play out.

The production looks beautiful – Christopher Oram’s set conveys a sense of decay and dilapidation, a sun-washed, crumbling space – but while the play’s structural bagginess can be read as a comment on the British presence in South East Asia, it becomes frustrating well before the end – what’s lacking is much in the way of Singapore grip. The silent servants who shadow the characters throughout – fetching their drinks, shouldering their abuse, biding their time – are shown in Grandage’s brief pay-off to get the last laugh, but instead of coming across as a final witty twist, there’s something ever so slightly sinister about the way this is framed: it leaves behind it a faintly sour taste.

Reviewed for Exeunt
Posted by Interval Drinks at 2:31 PM 1 comment:

Marian and David are a couple who are comfortable in each other’s company. She wonders around their stylish white bathroom in a faded Minnie Mouse T-shirt and a pair of turquoise knickers while flossing her teeth; he takes a long luxuriant piss in her presence. But the bathroom is a place of exposure and vulnerability – a place where people go to cleanse, to purge, to void – and it soon becomes clear that the couple’s seeming ease with one another is only superficial, that something dark and turbulent swims beneath.

Mydidae is a play written to fulfil a particular brief. Jack Thorne was tasked to create a play set entirely in a bathroom by the production company DryWrite, an exercise with shades of Oulipo: liberation through restriction. By narrowing his viewfinder in this way, Thorne has created a two-hander full of unexpected menace that probes and chips at its characters, peeling back layers of skin.

It’s not much of a surprise to discover that these two have lost something precious – Thorne drips that in early – it’s the aftermath of this loss he’s really interested in. Marian and David act out the little routines of domesticity, they fulfil their allotted roles, but there’s a hollow quality to their relationship, an absence. A would-be romantic candle-lit bath – complete with cabernet sauvignon and a shimmering mirage of tea-lights – reeks of cliché; it’s David’s attempt to convince himself that things are still as they were, that they can be again.

Performed on Amy Jane Cook’s fully-plumbed set, complete with working bath, sink and loo, the production has faith in flesh. Its use of nudity is genuinely exposing. Stripped of their clothes and neck-deep in the bathtub, there is nowhere left for Marian and David to hide, from each other’s accusing eyes, from the twisting of their own pain: their hate comes frothing to their surface; love and rage intersect and overspill.

Vicky Jones’ production delivers one brutal, awful jolt; like a shark surfacing, great white teeth bared, it rears up from the deep. Phoebe Waller-Bridge and Keir Charles handle the play’s shifting emotional tone incredibly well, effortlessly moving from the jokey, casual, almost mundane feel of the opening to the much more complex terrain of the play’s mid-section, occasionally pausing in their actions, as if caught off-guard by memory. Their nakedness is beautifully utilised too: the production revelling in the vulnerability of skin, damp and gleaming in the candlelight, the fine line of the spine, the unintentional comedy of the sheepish penis.

Both performances are incredibly measured. Waller-Bridge has a crisp, confident manner that conceals a seam of fragility, but it’s Charles’ unnerving, unblinking stare as he faces her across the bathwater – as he looks at her, into her, through her – that leaves the most lasting impression.

Thorne is adept at creating an undercurrent of unease, an incremental build-up of tension – he’s a master of what John Irving termed the undertoad – and even when Mydidae doesn’t quite ring true psychologically (it’s difficult to believe that this couple’s submarine feelings haven’t surfaced before), it’s still a potent piece of writing. While not quite as devastating as Simon Stephens’ Sea Wall, a play with which it shares some thematic overlap, in its most charged moments it still slices fairly deeply.

Reviewed for Exeunt.
Posted by Interval Drinks at 5:45 AM No comments: