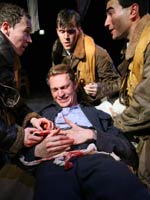 My week took a slightly surreal turn on Thursday. The play was Immortal at the Courtyard at Covent Garden, down in the bowels of the Theatre Museum. I noticed a couple of photographers at the door as I arrived and thought nothing of it, but then once in the bar I heard a very familiar Scottish accent. There was Ewan MacGregor, motorcycle helmet in hand, looking decidely dashing (and also Richard O’Brien in alarmingly tight white trousers, and a gaggle of well-groomed diary page types). And me, feeling decidedly unglam, a little sticky from the rush hour train, with pinenuts in my teeth from a hasty preshow stop-off at Pret A Manger. Fringe theatre press nights are never usually this glitzy. Someone in the cast must have been very well connected…

The play itself, Ciaran McConville’s claustrophobic Second World War drama about five RAF officers holed up in an old schoolhouse after being shot down over Holland, was a pretty mediocre affair, adequately acted but nothing special – and saddled with a crass final scene reveal from the M. Night Shymalan school of twisty surprise endings.
Posted by Interval Drinks at 9:35 AM

Ever thought of taking up poker ;-)