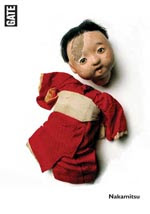 Yesterday, after work, I hopped on the Central Line and made my way over to Notting Hill’s Gate Theatre to see Ben Yeoh’s new work, Nakamitsu an adaptation of a classic noh play.

Having done some hasty wikipedia-ing before I left the office, I now know that Noh is a major form of classic Japanese musical drama that has been performed since the 14th century. But, if I’m honest, even armed with this knowledge I still had a very hazy idea of what I was actually going to see. My brain was picturing something very stylised and visual along the lines of Kabuki – so I’ll admit to being a little bewildered, on first entering the theatre, when I set eyes on the rather buff fellow in a school boy’s outfit who was parading up and down the stage, coquettishly slapping his bottom and doing suggestive things with a banana, as the audience filed into the narrow Gate performance space.

However after this slightly disorientating opening sequence (during which the dancer peeled down to his tiny, shiny pants – Lisa, again you were foolish to sit this one out) everything suddenly snapped into place. Following an unbearably tense scene set in the strip club, Yeoh takes the piece back to its traditional roots. The story is simple but harrowing – when his master flies into a rage at his only son, who has squandered his education, Nakamitsu is left to make a terrible choice between love and duty. What follows is gripping, exciting and visually striking. I don’t want to give too much away but it involves samurai swords, great swathes of coloured silk, and a really big drum. Yeoh manages to make it very accessible without undermining the play’s dramatic traditions. The performances were all engaging. And it was less than an hour long. Still daylight as I left the theatre (something that will please these chaps no end).

My not exactly thorough wikipedia-based research (which may well count for nothing as this: “article or section does not cite any references or sources.”) tells me that noh has a rather unique rehearsal process in which the actors practice their roles independently without interacting. I’d be fascinated to learn more.
Posted by Interval Drinks at 6:29 AM

Ooh, my friend was talking about this the other night. Sounds bizarre but intriguing. I'm going to have go along and see for myself.