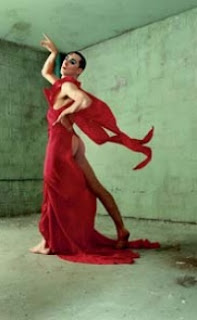 I headed over to Hammersmith on Thursday for the National Theatre of Scotland's production of The Bacchae at the Lyric. Having sorted out my tickets a while ago I was delighted to discover that Andrew from the West End Whingers, Helen Smith and City Slicker would also be in attendance on the same evening and we duly met up for a pre-show drink on the theatre’s terrace (anyone know the collective noun for a group of bloggers?)

Perhaps inevitably there were further post-show drinks (as discussed previously, the chief benefit of staging something without an interval is that it leaves room for at least two bottles of wine afterwards, not a glass as I erroneously stated) and we even managed to snag one of the Bacchae (the lovely Marcia Mantack) and bombard her with questions about the production. She patiently explained how some of the effects were achieved (the cool moment where flowers fall from the sky is done with darts not magnets as we had thought) and revealed just why it’s never advisable to let on to your choreographer that you are still capable of doing a cartwheel.
Posted by Interval Drinks at 5:45 AM

Surely the collective noun for a group of bloggers is A GOSSIP...