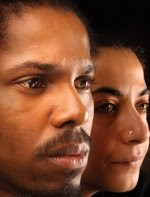 My friend ‘Barry’ works in a law centre in South West London. He supplies legal guidance to those most in need of it and is passionate about social justice, particularly any erosion of civil liberties. The recent restrictions on the amount of legal aid available to asylum seekers have made his work a lot harder. A five hour limit has been implemented per case which is ridiculously unrealistic and, as a result of these restrictions, many law firms have been forced to withdraw from offering advice on asylum claims as they do not believe they can operate effectively within this time frame. As a result many asylum seekers have been unable to continue with their asylum applications or stand much of a chance of mounting a successful appeal. (Correct me if I’m wrong on any of this Barry). So he was, of course, the ideal person to accompany me to see Unstated, a The Red Room production at the Southwark playhouse, written by Fin Kennedy. The word ‘worthy’ has been bandied about in discussion of this production, a word I’m sure I’ve used carelessly myself before, in a casually disparaging fashion, but the thing is: this is a worthy production, in the sense that it’s doing a thing worth doing, giving a voice to voiceless people and combating a culture that veers towards suspicion in disbelief in regards in regards to those claiming asylum in this country. Indeed ‘asylum seeker’ and ‘refugee’ have become such loaded terms, weighted with negative connotations, that anything that attempts to right that balance is commendable.

However we both felt that the immersive theatrical approach diluted rather than enhanced the impact of the material. Attempts have been made to turn the Southwark Playhouse – a series of brick walled, vaulted rooms under London Bridge station – into Southwark Removal Centre. So when audiences arrive at the entrance, they are patted down by uniformed staff before being reluctantly waved in. Once inside they are issued with ID cards and made to sign release forms – a pack of surgical gloves sits ominously on a table near the door. There are a lot of barked orders, with people being told to hurry up and get a move on as they herded into a ‘holding area’ (where the bar is), and one genuinely uncomfortable moment where a woman (cast member not audience member, that would be a bit much) is dragged screaming and pleading through the room, on her way to deportation. This was perhaps the show’s strongest moment, where theatrical elements successfully meshed together. After that it became rather repetitive, a blend of dramatic scenes, video commentary from political campaigners including Helena Kennedy QC (whose recent book Barry has been toting around recently), video and audio testimony from asylum seekers, and much shuffling from one room to another.

Again, we both felt that the production undermined itself on a number of counts. By painting the majority of detention centre staff, politicians and journalists as cackling black-hats, the power of the genuine testimony was lessened. We also wondered just who this production was aimed at? If it is hoping to overturn assumptions and to create a dialogue, it needs to reach a wider audience than the kind of people who tend to attend fringe theatre shows about the plight of asylum seekers. Also, if you’re going to fling facts and figures at people for over an hour and a half, some concession needs to be made to audibility and comfort, I was fidgety and wanting a drink well before the end (admittedly it doesn’t take much to get me to that point) and I may well have been slightly more receptive had I been seated for at least some of it.

I don’t want to knock this production too much as the intentions are good and it is refreshing, vital in fact, that the label of asylum seeker is lifted and the people underneath allowed to speak, in fact I would have liked to hear more of their stories presented in a simpler fashion. Barry and I did have a very long and animated discussion in a nearby Turkish restaurant afterwards, so on the level of triggering debate it succeeded admirably.
Posted by Interval Drinks at 6:24 AM

Asylum isnt exactly my area but my understanding that alot of legal aid asylum/immigration firms have left the field because its not economically viable to run the cases. The desertification of legal advice in this field is quite stark even in big cities like london. Add to this the fact that the home office wrongly refuse thousands of asylum applications each year and you have a lot of aslum work out there and no practioners to ensure that those most in need dont get deported to face death and torture.