Girl With A Pearl Earring at the Haymarket 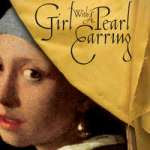 Sometimes one wonders if there are any original stories left. Tracy Chevalier’s popular novel about Vermeer’s most famous painting has already been filmed (with Colin Firth rather miscast as the artist) and it has now been transplanted to the stage in a new adaptation by David Joss Buckley. The first question one has to ask is why? Is this story so potent it deserves a third telling? Does theatre bring something to it that the other mediums were unable to match? The answer is no on both counts.

As with Chevalier’s novel, this is a fictionalised account of Delft’s master painter and what happens when he invites a young servant girl into his house. Griet is a pretty thing, seventeen years old and still more child than woman. Her father has been blinded in accident so she needs to take a job to help support her family. But from the start Vermeer’s wife Catharina views her with suspicion; unsurprisingly perhaps, as Griet’s beauty and lack of worldliness seems to transfix every man she meets. Not only does the butcher boy want to marry her but Vermeer’s lecherous patron, Van Ruijven, (played as a lank haired panto villain by Niall Buggy) clearly wants to get into her petticoats. And while Vermeer’s attraction to the girl is less overt, it is no less damaging.

Though Vermeer appears to love his ever-pregnant wife, he is drawn to the girl and allows her to assist him in his studio and eventually – inevitably – to sit for him. Which she does; having donned that striking turban first, she poses, as instructed, with her lips ever so slightly parted, her eyes bearing all. In this way the act of painting her becomes a far more intimate act than if he had simply given her a swift one in the kitchen, something that both Griet and the increasingly jealous Catharina understand even if he does not.

It’s conjecture, of course: the girl’s identity and Vermeer’s relationship to her are unknown. The book at least, written from Griet’s perspective, had an inbuilt distance, but here the story is presented in a lumpy, literal fashion. Every now and then a character will step over to the corner of the stage and make some solemn pronouncement about the way the narrative is going, just in case anyone wasn’t paying attention.

These little interludes are so clumsy it’s hard not to snigger. Not only that but they also speak of a lack of trust, the play does not appear to think its audience will be able to guess what is going on in the character’s heads without spelling it out in so blunt a fashion. (“She was different from the other maids…”) Later in the evening, having had the concept of allegory explained to her by Vermeer, Griet sobs and winces as he symbolically sticks her newly-pierced lobe with his wife’s earring. Conceits that may have worked well on the page, feel laboured and heavy-handed on the stage.

Kimberley Nixon is suitably plump-lipped and pretty under her plain cotton cap as Griet: young, yes, but not a total innocent. She over-enunciates at first, and seems to be speaking too loudly, moving too stiffly, but she gradually warms up in the scenes with Vermeer. Adrian Dunbar does a decent enough job as the artist, but he often comes off as a bit dim for not being able to see the consequences of his actions. There is no sign of the passionate artist figure, in love with the creative process and blind to all else. That may be a cliché but at least it would be a bit more interesting that what we get. There is, however, sturdy support from Sara Kestelman as Vermeer’s wily mother-in-law and Maggie Service as the other, plainer kitchen maid, Tanneke. And the production does look very pretty, the set design recreating Vermeer’s studio with its distinctive windows.

Joe Dowling’s direction is competent at best: it gets the job done, but never sticks its neck out. It seems a particularly odd choice that the paintings are never shown. The work – the art – gets lost as a result, and the idea of master and muse is never really explored in any fresh or insightful way. Without the art, it’s just another case of a middle aged man getting itchy around a pretty young girl.

Words once more borrowed from musicOMH as I have again been bee-like in my busyness this week.
Posted by Interval Drinks at 7:00 AM

I am sooooooooooooo glad we didn't bother with this.

That was most sensible of you. Despite the inclusion of some inept carrot chopping and some nifty wigs I suspect you would have legged it at the interval.

I loved the book, so I'm disappointed the play didn't turn out better. I think the idea had potential. Oh well.

I too loved the book, was severely disappointed by the film, and am glad I did not bother with the play after reading this :)

I couldn't agree more with your thought that surely, surely there must be some original stories left out there....