Romeo and Juliet at the Globe 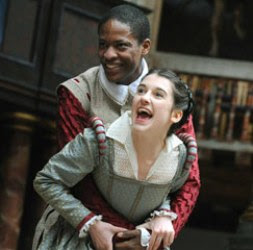 Youth is the dominant force in Dominic Dromgoole’s new Romeo and Juliet, his opener for the Globe’s Young Hearts season. His star-crossed pair are like children playing at passion, fuelled by hormonal urgency.

When Juliet learns from her nurse that Romeo has agreed to meet her she scampers round the stage in glee, and during the balcony scene, Romeo practically vibrates with excitement whenever Juliet calls him back, Rosaline’s brief flame already extinguished in his mind.

In this one, bright moment, standing beneath his window, Juliet is his all, his everything, and he can scarcely contain his pleasure that the attraction is mutual.

By emphasising the youthfulness of the lovers, Romeo and Juliet ceases to function as a sweeping love story and becomes a study of adolescent impulsiveness, of two people, tangle-handed, skidding down a path towards a lethal drop, unable to stop themselves (while the adults who may be able to stop them from plunging over the edge are either occupied elsewhere or unintentionally complicit).

Dressed demurely in schoolgirl blue, Ellie Kendrick’s Juliet is a plausible fourteen year-old, (but then the actress, who played Anne Frank in the BBC’s recent adaption of the diaries, is still on her gap year). She is a bright eyed thing taken to prostrating herself full length on the floor before her displeased father, a shining child, but with a flash of womanhood within her. One suspects she might be a skilled sulker.

Adetomiwa Edun’s Romeo has the air of the cool kid in the classroom, yet the façade is all too easily peeled away. When faced with the reality of Tybalt's death he curls in a ball on the floor and cries.

Philip Cumbus’s Mercutio has a melancholy quality that couples surprisingly well with his boisterousness when over-liquored, while Penny Layden, though younger than is usual in the role, makes an agreeably earthy nurse, devoted to her young charge.

Dominic Dromgoole’s production has a bell curve quality: it takes a while to find its feet, to warm up, hits a high, but then rather fumbles the dual death scene. The young actors, so confident in earlier scenes, end their lives with little more than a shrug and sigh. And, from the side I was sitting on at any rate, it was impossible to see Romeo’s dead form on the floor as it was totally obscured by Juliet's funeral bed. Juliet’s face, as she realises the fate of her husband of less than a day, was also hidden.

The comedy is rather bluntly handled. No reference to weapons or tools is allowed to pass without an accompanying spasm of frantic groin thrusting or a sword being wielded in a phallic manner. It strayed beyond bawdy and felt as if Dromgoole were throwing out cock joke cookies to the crowd for putting up with all the poetry.

Fortunately this is countered by some atmospheric music and some amusing, if tentative, use of the pit. Dromgoole doesn’t take over the space with same degree of invention as Lucy Bailey has in the past with her Titus and Timon, but there are some nice touches. Juliet in her death-like slumber is carried over the heads of the audience and Friar Lawrence makes his entrance by placing a blessing hand on unsuspecting heads as he files through the crowd to the stage.

Reviewed for musicOMH.
Posted by Interval Drinks at 1:08 PM