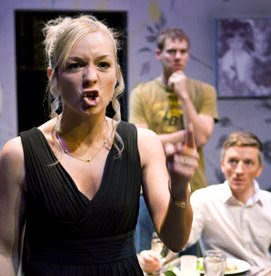 Helen and Danny live in a bubble of middle class comfort. They have stylish furniture, attractive clothes and a bottle of something crisp and white sits on the dining table as they embark on a celebratory dinner. But there are thick bars on their windows and the outside world they have struggled to keep at bay is about to seep in.

Their dinner is interrupted by the arrival of Helen’s brother, Liam, his T-shirt covered in another man’s blood.It’s the most satisfyingly startling way to open a play and grabs its audience from the outset.

Liam is understandably agitated and it takes a while for the couple to draw out his story. A lad has been attacked and left bleeding on the street, that’s what he tells them. He tended to him, hugged him – tried to help. Danny wants to call the police but Liam has a criminal record and Helen fears the consequences of getting involved. After all the boy was not someone they knew, not family, and he might even have been involved with a past assault on Danny, so why take the risk?

Dennis Kelly’s tense three-hander paints a bleak picture of a world where fear is the dominant force: fear of the law and the unknown, fear of a poorly defined ‘them’ who given the opportunity will damage and destroy everything the couple have so carefully built for themselves.

Kelly is also an expert at the drip-dripping of information to his audience. He constantly resets Liam’s story, revealing some shocking new piece of information, some new twist in the truth. He seems to enjoy writing himself into corners and then finding plausible ways to escape: Helen’s reasoning for not calling the police or the two men’s decision not to go outside and look for the injured boy are prime examples of this. Kelly slowly brings the audience round to seeing and understanding why the characters react as they do. It’s an incredibly controlled piece of writing in this respect. Perhaps too controlled as some of the vital elements in the telling of the story – like Liam and Helen’s past life of foster homes and the difference in class between Helen and Danny – feel like structural components, necessary to justify certain characters’ actions, rather than natural aspects of the narrative.

His dialogue is also an exercise in control and precision. Each stutter and hesitation matters and carries weight. The characters converse in a broken, halting yet rhythmic manner; sentences go unfinished, questions remain half-formed. Of the three cast members it is Joe Armstrong’s superficially genial yet utterly menacing Liam who best grasps and runs with the play’s particular patterns of speech. He seems perfectly at ease with this stop-start way of speaking whereas the language feels rather more stylised in the mouths of Claire-Louise Cordwell and Jonathan McGuinness. There is sometimes a degree of stiffness to their performance that is absent in Armstrong.

The plot can’t quite shoulder the load of the points Kelly wants to make about fear and the erosion of communities, the setting up of fences between ‘us’ and ‘them’ in a way that absolves people of responsibility to one another, but it is a gripping tale that keeps its single thread taut from start to finish. The use of Helen’s unborn child to give some extra emotional resonance to an already tense situation does feel rather excessively manipulative and strikes something of a sour note.

Reviewed for musicOMH
Posted by Interval Drinks at 4:56 AM