Measure for Measure at the Almeida 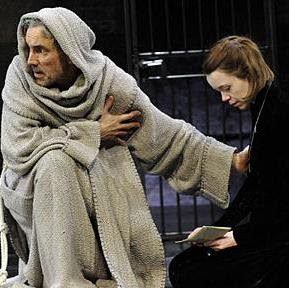 Measure for Measure is often categorised as one of Shakespeare’s ‘problem plays’, meaning it doesn’t easily fit into the boxes marked ‘comedy’ and ‘tragedy’, but falls awkwardly in between. It’s a morally muddy piece that raises as many questions as it answers. A better way of viewing it is as a challenge rather than a problem; it takes clarity of vision and some strong assured performances to pull it off with any degree of success, something Michael Attenborough manages with his modern dress production at the Almeida.

The first few minutes are full of writhing and thrusting bodies, a gaggle of prostitutes tottering about in quim-skimming skirts, which rapidly serves to establish the Vienna of the play as a place riddled with vice and corruption.


The Duke, who seems keen to clean things up, decides it’s necessary for him to view society from a different perspective, his identity concealed under a friar’s cowl. He appoints the uptight Angelo to be his deputy in his absence, a man who at first seems up to the task; he is rigid and diligent, excessively so, and quite able to send a man to his death for having sex out of wedlock.
Isabella, a novitiate nun, clad from neck to ankle in black, comes to plead for her condemned brother and Angelo is knocked off course by the mere sight of her. She taps into some dark seam within him and he attempts to use his new authority to claim what he suddenly, feverishly needs to possess.

Rory Kinnear is superb as Angelo. To begin with he is socially awkward, a bit of a nebbish in his specs and cheap suit. There is something almost endearing about the way he frets about Isabella’s imminent arrival, putting in his contacts and tidying his desk, but this is quickly undercut by his sweaty-palmed pawing of her and his very indecent proposal, his actions charged with lust and frustration. Yet he seems almost as shocked as she is by his behaviour, by the aggressive, scheming individual he finds himself becoming, a man driven by urges he has perhaps not felt before and can’t process in any normal way. As played by Kinnear, he’s a conniving hypocrite but not a monster.

Anna Maxwell Martin is clear-eyed and determined as Isabella, perfectly plausible as a woman who would consider sacrificing her brother’s life in order to maintain her chastity. Her inner struggle is evident but there is also a slight trace of petulance and self-righteousness to her sheen of dignity.

Ben Miles’s Duke Vincentio remains an enigma. He seems slightly uncomfortable within his own skin, nervy and troubled. Though clearly unsettled by the murky world he finds himself in, he takes some pleasure in the complex string of machinations and deceptions he instigates and his motivations are never quite clear. Returned to his ducal finery he seems oddly exposed and inadequate.

Though his is a far broader performance, Lloyd Hutchinson displays sound comic timing and judgement as the manipulative wide boy, Lucio, playing both sides against each other and revelling in the chaos, though his punishment for his behaviour seems excessively harsh.

The seedy, red-light aesthetic evoked by Lez Brotherston’s set doesn’t always sit comfortably with tone of the piece. The clash is too dramatic. Yet, for the most part, Attenborough’s production manages to achieve resonance whilst still fully conveying the play’s complexities. The cast are a joy to watch and when the production hits its stride the whole things sings.

Reviewed for musicOMH.
Posted by Interval Drinks at 6:14 AM