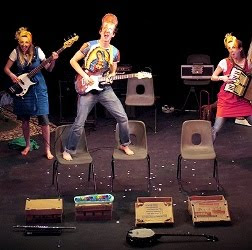 One of the more pleasing activities at last year’s festival was watching Little Bulb, then resident at the Forest Fringe, create and shape their endearingly raucous musical, Sporadical. With its cardboard props, embracive energy and fable-like quality, it was an endearing piece, well suited to the space.

The company’s latest offering, Operation Greenfield is, comparatively at least, a tighter affair that has more in common with their delightful debut piece, Crocosmia. While that show explored what it was to be a child suddenly faced with great loss and contained some memorable Battenberg puppetry, their new show is bigger in scope and the characters older, teenagers.

Set in Stokley, a quiet middle England village at some point in the mid-1990s, it follows a quartet of Christian teenagers as they prepare for their local talent show. Their chosen song is based on the story of the Annunciation, with lyrics supplied by the only Catholic member of the group.

The level of invention has not dipped and, as with Sporadical, the piece is studded with songs, including a strange and potent sequence when the cast wear matching Carmen Miranda masks. With a collection of props including several stepladders, a pair of fluffy angel wings and a large cardboard Elvis, the cast manage to evoke all manner of adolescent awkwardness and longing. Their attention to detail is lovely: the little glances, the shifting allegiances, the first stuttering flutter of friendship, the worry of not quite fitting in.

This is a more honed production than Sporadical, more precise in execution. But there’s also a sense that the company don’t always know where to stop, where to draw the line and leave things be. By the time their last show had reached BAC, their continual tweaks and additions had actually begun to subtract from the considerable original charm of the piece and here again there is a sense of a company adding layer upon layer upon layer, overworking things. Though it contains moments that are truly delightful it also feels overlong at ninety minutes in length. Their whimsical, eye-wide approach is refreshing in smaller doses but here they overplay their hand and some of the magic is lost.

Reviewed for musicOMH
Posted by Interval Drinks at 4:19 AM