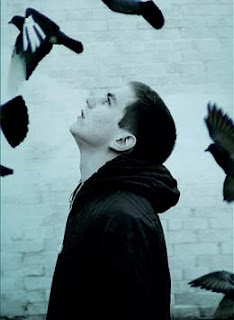 Andrew Sheridan’s brutal debut, the joint winner of the 2008 Bruntwood Prize, is a play that leaves a mark, a bruise, the imprint of fingers round a thin wrist. The writing is vivid and intense, full of bleak volleys. A mother describes the many ways she could have killed her unwanted child with an almost poetic exuberance; the fallout of a nuclear blast is described with similar verve.


Oscar is a child no-one seems capable of loving. His young mother, in a relationship with a controlling, volatile man, abandons him and his grandparents struggle to show any affection for this scrap of a boy they’ve been left to raise. He grows up lonely, friendless, but not broken; he remains oddly unbowed.


The play spans a period of roughly fifteen years, from Oscar’s birth to his teenage years. Sheridan takes a recognisable kind of English domesticity and tugs at it, distorting and exaggerating it, stretching it out like a piece of well-chewed gum. Familiar things – deck chairs, a battered child’s paddling pool, an artificial Christmas tree that has seen better days – take on a new resonance in this world. The play is stuffed with perverts and aggressors, men who loiter with intent; few scenes pass without talk of bums, cum and pus. A rare moment of brightness ends with a bird shitting on someone’s head.


Everything stinks, everything is broken down; this is a world in a process of collapse and decay, shaped by pain and the inevitability of abandonment. This unrelenting quality has its moments of absurdity, there is humour in it, of a kind, and Sheridan acknowledges this and, plays upon it: scabs are picked, Mars bars are popped down pants for ‘softening.’ There is humanity as well as humour, a small buoy bobbing on a grey wave of despair, a note of hope. There needs to be.


Sarah Frankcom’s direction and the performances she draws from the cast add to this sense of balance. Harry McEntire (so memorable as Chadwick Mead in Frankcom’s production of Simon Stephens’ Punk Rock) is endearingly awkward yet resilient as Oscar and it’s hard not to feel for him when he hides his face in his jumper and tries to eat his ice cream through the wool. Paul Copley and Gabrielle Reidy play his grandparents as two people who have had the colour drained from them over their lives, slump-shouldered, accustomed to upset and loss. Laurence Mitchell plays a string of characters, all differently menacing and unsettling, while Rebecca Callard plays Oscar’s mother, hardening as the play progresses.


Amanda Stoodley’s set is fittingly non-naturalistic, a cave-like space with a fractured, cracked floor and walls made up of the acquired junk of life: suitcases, tennis rackets, and an old television set piled and packed under plastic sheeting like a cross between a suburban attic and a crime scene. At the end of each scene, the props are piled in a growing heap in the corner, like rubbish on a tip.


While the influences of the writing are at times all too obvious, Sheridan’s play feels like a work in a particular tradition rather than a pastiche. It has its own rhythms and cadences, its own drive, though the pacing sometimes wavers and there are slumps as well as highs. The final scene, a bit too cyclical and neat perhaps, has a power of its own and the play as a whole has the capacity to leave the audience dazed and gaping. There is a moment of hesitancy before the applause begins.


Reviewed for Exeunt
Posted by Interval Drinks at 3:46 AM