Brontë at the Tricycle Theatre 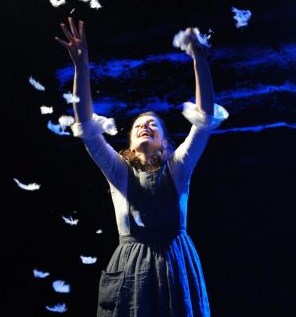 “Literature cannot be the business of a woman’s life, and it ought not to be. The more she is engaged in her proper duties, the less leisure will she have for it, even as an accomplishment and a recreation. To those duties you have not yet been called, and when you are you will be less eager for celebrity.” It was with these words that the poet laureate Robert Southey replied to Charlotte Brontë after she sent him a selection of her verse. He assumed that her burning need to spill herself onto paper would – and should – fade when she married; Charlotte however, perhaps not surprisingly, was not swayed by his argument.

Following their staging of Jane Eyre, Shared Experience shift their attention to the lives of the Brontë sisters with this reworked version of Polly Teale’s 2005 production, the third part in a trilogy that also includes After Mrs Rochester, an intertwining of Wide Sargasso Sea with the life of its author, Jean Rhys.

Living a life of isolation in rural Yorkshire, the sisters’ imaginations, their creative energy, provide a means of escape both from a life singed on all sides by death – the girls lost their mother and their two elder sisters when young and the graves of their father’s parishioners loomed through their windows – and from the weight of expectation, of how a woman should be behave, of what a woman should desire. To write, for pleasure, for release was not what decent Victorian daughters did.

As in Shared Experience’s earlier work, the girls’ creations share the stage with them, as physical manifestations of deeply internalised emotions. Through repetition, both by the company themselves and those influenced by them, this device has become an over familiar one which in turn leads to it feeling heavy-handed at times; this is particularly true of a scene in which a scarlet-clad and wild-haired Mrs Rochester writhes on the floor at Charlotte’s feet as she reads a letter from her Belgian tutor; at other times it’s done with a lighter touch, such as the moment when a sickening Emily is soothed and embraced by Cathy.

This emphasis on physicality extends into the siblings interactions with one another; people spring onto tables and bodies are flung about the stage to the point where the production threatens to lose its grip on the staid routine of their day to day lives. The production seems to need to paint the sisters as being as emotionally turbulent and passionate as the characters that sprang from them, and in a brief opening sequence, it concedes this need; featuring the three actresses in modern dress, unencumbered by stays and skirts, it subtly acknowledges how difficult it is not to frame the Brontës sisters’ lives through a contemporary lens.

Nancy Meckler’s production has an episodic, almost bitty quality, which intensifies towards the end as tragic death follows quickly after tragic death requiring frequent fades to black. There are so many scene shifts in the second half that Anne’s demise barely registers; there’s a cough and the sound of the waves at Scarborough and suddenly she’s gone. Kristin Atherton’s performance complies with Teale’s reading of Charlotte as a woman wonderfully unwilling to be meek and still, but also at times pinched and rigid and full of self-disgust; steely too and selfish, especially in her relations with Emily. (Charlotte’s brief flicker of a marriage to her father’s curate is also dealt with in a rather off-handed manner).

Elizabeth Crarer gives a remarkably controlled performance as the wilful and slippery Emily, the most unknowable of the sisters, and Flora Nicholson successfully conveys Anne’s warmth, calm and practicality, though her character is somewhat edged out, her inner life less fully explored. Mark Edel-Hunt is suitably brash and boyish as Branwell, sunk by the pressures inherent in being the only son. It’s hard to know what, if anything, Meckler is saying in casing Stephen Finegold not just as the dour Brontë patriarch, but also as Charlotte’s eventual husband and her married tutor, M. Heger, the object of her affection.

Ruth Sutcliffe’s minimal set consists of a black back wall and a single door. While this can’t fully convey the sense of isolation and the power of the surrounding moors, the blackness instead becomes a canvas for the girls’ imaginings. Yet while the performances are particularly strong and the production contains a number of resonant moments, a distance remains; the sisters remain remote figures against the black.

Reviewed for Exeunt
Posted by Interval Drinks at 2:34 AM