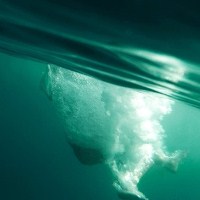 An isolated cabin, nestled deep in the woods, the setting for so many fairy tales and horror films, makes an apt backdrop for Jez Butterworth’s much anticipated new play. The River eschews the large canvas approach of Jerusalem for something more intimate and atmospheric, but while it is a wilfully different beast, lacking the thump and rumble of its predecessor, it too is concerned with the process of male myth-making, the stories we tell ourselves and each other.

Dominic West plays an unnamed man who has brought his new girlfriend, played by Miranda Raison, out to his uncle’s cabin to – amongst other things – school her in the art of sea-trout fishing on a moonless night. Bearded, flannel-shirted and rugged, West’s character is Jimmy McNulty with a dash of Gentle Ben; he’s gruff but far from taciturn, a poetic sort, and wonderfully capable in the kitchen to boot; he even manages to make fly fishing sound appealing, like foreplay.

Ultz’s detailed design is a study in brown: a raw-walled, rustic space, all chestnut and chocolate with a convenient stash of candles and a shelf of well-thumbed paperbacks, a gingerbread room where it is forever twilight. Despite the potentially sinister setting, there are no bloody chambers in this cabin – though that beard of West’s does make one wonder – and the only guts we see belong to a sea-trout, spilling like pink udon into a waiting bucket as West prepares it for the oven, but this place does have its fair share of ghosts; there are faint traces of other women, little tokens and leavings, echoes of distant song. Conversations are repeated, like ripples, spreading outwards, and at the centre of the play there is a sense of a man circling and searching for something he cannot find – something lost, perhaps destroyed – a sense of something aching and even, perhaps, malign.

If it’s not too crass a comparison, there were times were I found myself thinking of that episode of Sex and the City where Carrie’s new chap – the anti-Big – takes her to stay in his country cabin and she, of course, teeters around on inappropriate shoes and squeals at every woodland creature that comes within three feet of her. The cabin in both that episode and here feels like a kind of audition, a test, with West’s character enjoying the game, playing his part and waiting to see how the woman in question plays hers. The early stages of a relationship can feel like a kind of theatre, with each participant acutely aware of their words and actions, and Butterworth plays on this idea of memory as something which can be sculpted but which can also haunt someone more effectively than any external force.

The River contains some characteristically beautiful writing, the play replete with shimmering images and recurring motifs, particularly during the scene where West’s character recalls the first fish he ever landed as a boy, a delicate dream of a story, riddled with the kind of intricacy that comes from retelling, an account honed over time. This image of the dying fish, twitching and slippery, echoes throughout the play, as do those of dead birds and women viewed from a distance across water.

Ian Rickson’s measured yet engrossing production is not afraid of silence. It devotes several minutes to a scene of West preparing a meal, gutting a fish and dicing fennel, dinner as ritual, the snick-snick of knife blade on chopping board the only sound we hear. West himself is excellent, as are both Laura Donnelly and Miranda Raison as the women who flow through his life. The lighting is low and golden throughout, intensifying the sense of intimacy and the mood shifts slowly and subtly from one of warmth to something more strained. The production concludes with, not exactly a twist, but a further rippling, one which slightly undermines the delicacy of what has gone before, and Rickson’s final casting decision – difficult to discuss without giving the game away – doesn’t help matters, spelling out visually what was already fairly explicit in the text.

Reviewed for Exeunt
Posted by Interval Drinks at 7:00 AM