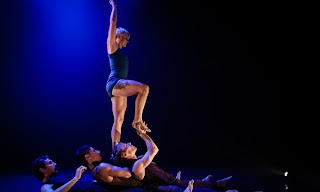 There’s a wild free-running energy to Knee Deep. The four performers hurl themselves at one another, rubber-banding off one another’s bodies, teetering on the edge of stage. They stand on each other’s shoulders, climbing each other like vines, before dangling from the ceiling like human chandeliers.

This is the circus of exertion, the emphasis placed on the body and the limits to which it can be pushed. Performed by Australian circus troupe Casus within the crimson cocoon of the Spiegeltent, the audience are close enough to see them sweat, to watch their muscles pulse with the effort. It’s not that it’s not polished, because it is, but we’re also made aware of the element of risk involved.

The company are clearly interested in fragility. This is established in the opening sequence in which Emma Serjeant, the company’s only female member, places a couple of boxes of eggs on the stage. She then places her weight first on to one box than the other, standing on the eggs. They don’t crack; they don’t shatter – they bear her, hold her. It’s a striking image, performed with grace and delicacy.

The show takes the form of a series of wordless vignettes, some solo, some in which all four share the stage. There is much leaping, balancing and tumbling followed by silk and rope-work. They tread on one another’s shoulders, backs, even heads, and spin and throw each other around the place as if they were dolls; they turn their bodies into totems, sculptures, bearing each other’s weight. They hang off each other in various rather alarming ways, performing the kind of lifts and balances that make the audience wince and gasp and laugh all at the same time. Many of the routines resemble a kind of human parkour with the performers limbs standing in for the bollards and railings and other urban obstacles. Spectacular as much of this is though, the small touches – the brief smiles that pass between performers, the nods of reassurance – are just as central to the
feel of the piece.

Half way through the performance they strip down to their briefs and the show becomes a celebration of skin. Both Serjeant and Nantano Fa'anana have elaborate tattoos and these become part of the aesthetic of the piece, the ink like armour, their strength only emphasised. Fa'anana slaps at his bare chest and legs, slowly at first but quicker, quicker, a rhythm building, his body his instrument.

Later the eggs make a return, miraculously remaining intact, uncracked; there’s a sequence with wine bottles which is also elegantly, playfully executed, the eggs and bottles making us all too aware of how breakable people can be. They don’t overplay it, but it’s still a potent image.

While it’s true that a couple of the sequences feel superfluous – there’s some classic blockhead business with a hammer and a nail, some tepid hula-hooping – this is an exhilarating hour of contemporary circus that also makes you think a little differently about the body and its capabilities, both theirs and your own.

Reviewed for Exeunt
Posted by Interval Drinks at 5:34 PM