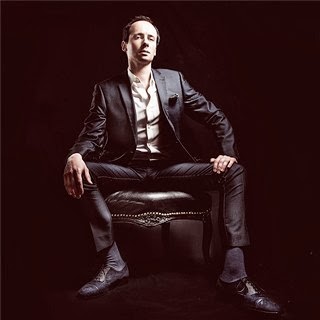 We do love a monster. It's a recurrent cultural trope - Lecter, Dexter, Dracula - men who can rip you to pieces, who can make you bleed. Hattie Naylor’s monologue dives deep under the skin of one such man as he seeks out submissive women for sexually violent encounters. If the women ask too much of him, if they dare to dig into his past, the encounters are fatally terminated.
Lee Lyford’s production is a pitch black trip into the bloodiest of chambers. Paul Mundell’s performance as this killer of women, this wolf in sharp clothing, is a thing of precision, every word weighted, every vowel relished, every smile controlled and loaded. Though superficially charismatic, there are times when even his eyes seem to blacken with hate. In the middle of this Lyford lets him cut loose and suddenly this measured man is dancing like a wild thing, fists pumping, arms twirling, breath heaving from him in ragged bursts.
Hayley Grindle’s design accentuates the sense of unease, with six slender strip lights glinting like neon ribs and a seventh suspended from chains up above. A leather armchair sits in the centre of the stage like a throne and beneath Mundell’s words there’s a constant ominous under-pulse, enhancing the sense of claustrophobia. The piece loses its footing a little as it nears its resolution and there’s a sense that, in some ways, it feeds the machine it sets out to critique, but for all this it’s still a gripping and incredibly intense experience.
Reviewed for The Stage
Posted by Interval Drinks at 3:28 AM