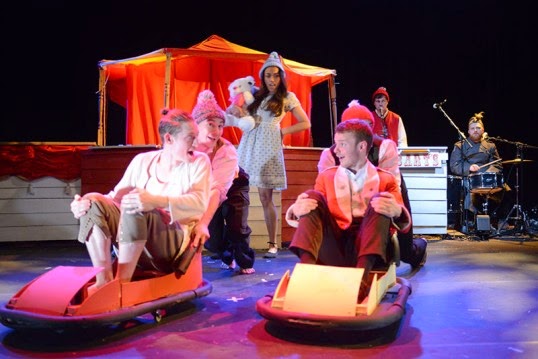 Some of my favourite shows of this year’s Fringe have involved people screaming. Men bellowing and raging in pain, woman shrieking in atonal, primal synchrony. But while screaming is sometimes a necessary response to the world, it’s not unwelcome to see a show whose defining characteristic is loveliness, which sets out to leave you beaming and – literally – feeds its audience cake.

withWings’ The Duck Pond is a candyfloss-flecked reworking of Tchaivosky‘s Swan Lake sans swans. Prince Siegfried has just turned 21 and is under pressure to marry. In truth he’s not much interested in girls but nonetheless his mother presses ahead with finding him a bride. As part of his birthday celebrations he visits a travelling fair, and as the moon rises he hooks himself a lucky duck – and ends up falling in love.

Odin, as is the way of such things, has been placed under a spell by the owner of the fair, a malevolent magician called Rothbart. By day he is a yellow plastic duck bobbing among his brethren but under the light of a balloon moon, he becomes human.

The production is all feathers and honey and loveliness. It is sweet and charming and packed full of little inventive touches designed to make you smile. There is music and dancing and the inevitable cascade of glitter, a dinky carousel, a coke bottle orchestra, and, as it’s a birthday, there are presents for everyone. The high point is a wonderfully playful and charming musical montage sequence in which the young Prince falls head over pointe for his enchanted duckling.

James Bennet and Tom Coxon both giving appealing performances as the Prince and his paramour, the musical number are skilfully performed and emotionally charged, sweeping over the audience, carrying you along on a wave of sugar water. Some of the ballet is a little wibbly and the shift towards the play’s tragic conclusion is a bit abrupt, but the ending is proper lump-in-the-throat stuff and there’s something hugely endearing and loveable about the whole exercise.

It’s a very youthful production, but in an energising way. You can clearly see the ripples of influences at work here, you can tell which companies these guys admire, it’s a little bit Kneehigh, a little bit Antler, a little bit Little Bulb, but there’s also plenty of invention and their attention to detail is admirable, even the programmes have been designed to look like party invites, a lovely touch. The whole thing has charm in abundance (though if you’re allergic to bobble-hatted whimsy this might not be one for you) but what’s lacking is a clear sense of identity as a company and they’re clearly more at ease with the visual than the verbal. They just need to pin that down, to find a voice that’s theirs alone.

Reviewed for Exeunt
Posted by Interval Drinks at 1:39 AM