Hamlet at the National Theatre 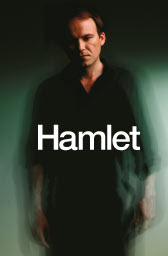 Rory Kinnear is a very cerebral actor. It’s often possible to see the things clicking and connecting behind his eyes, but here in his long-mooted Hamlet for the National Theatre, this only works in his favour.

He speaks with a clearness of tone and freshness of voice, as if the words were just occurring to him, and, even when he is still, a sense of inner desperation remains.

His Hamlet is a mercurial figure, sometimes self-pitying, sometimes hard-edged and cunning; a young man pinioned by circumstance. When, rather self-consciously shamming insanity, he curls himself up in his trunk and pulls down the lid, there’s a palpable feeling that he wishes he could stay like that, balled up with a book, secure and safe, and shut out the hell he’s found himself in.


The production belongs to Kinnear. Nicholas Hytner’s direction is solid and polished but also rather safe and occasionally uninspired. The overriding sense is of a watched world: dark suited men with earpieces glide through anonymous corridors, people listen behind doors and silent figures can often be glimpsed through windows or submerged in shadow. It is impossible to be truly alone in this environment – there is always someone looking on or listening in.

Kinnear is first glimpsed in his mourning suit, looking stiff-spined and awkward as people buzz around him, an afterthought in his own home. Claudius’s first speech has become an on-camera address and once it’s all wrapped up everyone visibly slumps while Gertrude reaches for the first of many glasses of bubbly. The playing out of events for public consumption is a recurring theme and Hytner’s production contains visual echoes of The West Wing as well as touches of something more sinister and Soviet.

Patrick Malahide is a sly and understated Claudius while Clare Higgins plays Gertrude as a groomed and glossy political wife, crammed into a pencil skirt and high heels, masking her complicity with drink; but, in a production of great clarity, her motivations remain the haziest of all the characters and Higgins rarely allows the audience a handle on what she is feeling or thinking, a barrier remains in place.

Ruth Negga is a sparky Ophelia and has a real sense of sibling warmth with Alex Lanipekun's Laertes but, as is often the case, comes unstuck with the mad scenes, and just seems silly gliding round the stage on an overly symbolic shopping trolley papered with her dead father’s image.

Vicki Mortimer’s design enhances this idea of the ‘corridors of power’; the palace is an elegant but anonymous space, sparely furnished, chilly and shifting, with Hamlet’s book-strewn and messy quarters standing out in contrast. Though Hytner’s production can be a bit obvious, a bit blunt in places, and some of the innovations seem misplaced – the matching T-shirts whipped out to accompany the players’ performance are a case in point, stretching credulity – it’s very well-paced and has real dramatic propulsion, thanks in large part to Kinnear.

Kinnear’s somewhat studenty Prince is pitched into a hellish mess and made to confront himself and his world for what seems the first time; his is a very human Hamlet, smacking his hand against a desk with such force he hurts himself, smoking through his soliloquies. It’s his performance that sticks, that roots itself deep, a thoughtful portrayal that never feels mechanical, always fresh, considered and touchingly real.

Reviewed for musicOMH
Posted by Interval Drinks at 5:12 AM