Rosencrantz and Guildenstern are Dead at the Theatre Royal Haymarket 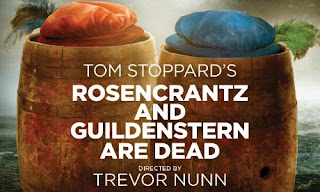 The lights rise on two men huddled by a gnarled and leafless tree. But despite this momentary illumination Rosencrantz and Guildenstern remain in the dark for much of Tom Stoppard’s 1966 collision of Shakespeare and Beckett.

Transferring to London after a brief run at Chichester Festival Theatre, Trevor Nunn’s production seems a bit too keen to impress upon the audience its GSOH. The wit and wordplay, the verbal waltzing, are ramped up, pushed to the fore, while the play’s more philosophical musings on free will and the quest for meaning can at times feel secondary.

Former History Boys Samuel Barnett and Jamie Parker are reunited as Hamlet’s hangers-on; Nunn’s production relies heavily on their chemistry and charisma and they both duly deliver. They have an engaging rapport, playing off and against each other’s strengths; it’s like watching a kind of dance, though each takes turns to lead. Barnett is a little shrill and given to panic, restlessly darting from one side of the stage to the other, but he’s also rather puppyish and endearing, while Parker is marvellously pragmatic, greeting each new upset with the same straight-faced resignation.

They regard Hamlet’s various outbursts and breakdowns with bemusement, and seem both puzzled and intrigued by the young prince’s frequent soliloquising which, in Nunn’s production, is mostly delivered with his back to the audience – apt, as the happenings at Elsinore remain backdrop, to be entertainingly picked over and apart yet only ever viewed from a distance. The only supporting character who interacts with the title pair in any meaningful way is the First Player. Originally intended to be played by Tim Curry, who had to pull out of the production due to ill health, the role is now played by Chris Andrew Mellon, both seedy and camp in his crimson codpiece. With eyebrows permanently arched, there’s a showy pantomime quality to his performance that seems quite fitting though his frequent bursts of villainous cackling are perhaps pushing things too far down this track.

The arrival of the travelling players provides some necessary textural disruption to the, at times wearying, verbal back-and-forth. Their second act dumb-show is the visual highpoint of the production and there’s something particularly potent – and in keeping with the overarching concerns of the play – in their despondency to find they have been performing without an audience.

Simon Higlett’s effective set with its ceiling of wooden slats, shafts of white light spilling through the gaps, manages to evoke the sense of being below deck on a ship – which becomes relevant in the play’s second half – and, more generally, to create a the feeling of the characters being caught in some strange, half-way place, a world between and beneath.

What’s missing is a sense of connection. Rosencrantz and Guildenstern (curiously attired in ill-fitting jeans and furry jerkins) are fated to orbit Hamlet’s star forever, to be continually summoned and dispatched. But while their need to glean meaning from their predicament is vocalised repeatedly, it is never really felt. The play too often feels like an exercise in linguistic agility and Nunn seems keen that the audience grasp what a smart, witty thing it is. The laughs come – eventually – and the word play often excites, but there’s little sense of despair, little chance of emotional entanglement with their plight.

Reviewed for Exeunt
Posted by Interval Drinks at 3:13 AM