The Playboy of the Western World at the Old Vic 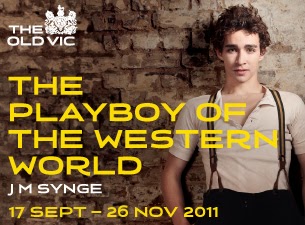 When J.M. Synge’s The Playboy of the Western World was first performed in Dublin in 1907, the audience exploded over its moral murkiness and its perceived ridicule of Irish village life, with particular ire reserved for the very notion of Mayo woman parading in their shifts, something which is referenced in the text but not actually shown.

The play is now considered Synge’s masterpiece and fully cemented in the canon of 20thcentury Irish drama, a thing to be revered and handled with due care. So it’s difficult to make that leap back in time, to fully grasp what so inflamed its original audience, causing them to riot in the stalls; John Crowley’s production for the Old Vic does little to help bridge that gap for, though undeniably lively, it’s distinctly polished in tone, overly polite.

Former Misfit Robert Sheehan, here making his stage debut, plays the young interloper, Christy Mahon, who arrives breathless and footsore at a Mayo shebeen late at night and immediately starts to sweet-talk the locals. When he first arrives, he’s a hunched and diminished figure, ‘destroyed by walking’ but the minute he lets slip that he’s killed his bully of a ‘da’, delivering a fatal blow that near enough split the man down the middle, then the community starts to look at him differently. Sheehan’s physicality reflects this change; gradually he uncurls and unfurls, like a flower turning to face the sun. When he moves, he’s like a gangly marionette, oddly jointed and long of limb; though Sheehan is probably too pretty for the role, his awkward way of holding himself, his crab-like, wary stance, goes some way to overcome this.

Christy suddenly goes from being a nonentity to a man anointed with the sparkle of scandal. Instead of condemning him for his actions, the local folk seem excited by his story. He is a like a star in their midst, white knight and rock god rolled into one, and the source of much female adulation. The publican’s daughter Pegeen Mike takes an instant shine to him, but she has to compete for his affections with the predatory Widow Quinn. Christy can’t quite believe his luck; he talks with increasing rapidity and energy, as if he’s worried the spell will be broken if he ever shuts up.

Sheehan is somewhat cowed by the force of the two female leads. As the volatile Pegeen, Ruth Negga almost visibly glitters; there is heat in her gaze but also metal, and she is not a woman you would want to cross. The same can be said of Niamh Cusack, as the Widow Quinn; she fixes her sights on Christy and is adept at steering the situation in an attempt to get her way. Compared to the sodden, quaking Mayo menfolk, these two make a formidable pair.

Scott Pask’s detailed set consists of a rotating two-room shack, a stone walled collage of greys and browns with a string of laundry slung to its side – grinding rural poverty lavishly and expensively recreated. A clutch of villagers with fiddles and accordions set off each scene and provide bridging music as the house slowly twists and slides into place.

The way the play blends the comic with slivers of the macabre, its tectonic shift from the light-hearted to the unsettling, now seems almost too commonplace to be worthy of comment, but Synge was particularly revolutionary in this regard and his influence can be seen everywhere, in the work of Martin McDonagh, and in the gentle (and not so gentle) mockery of Father Ted. This revolutionary quality – and the lyrical brilliance of the language, its glorious musicality – is evoked by Crowley’s production without ever being completely convincing. Everything about it is very nice, both to look at and to listen to, but there’s something missing from its middle, the vital thump of a heart.

Reviewed for Exeunt
Posted by Interval Drinks at 6:37 AM