The Two Gentlemen of Verona at the Royal & Derngate, Northampton 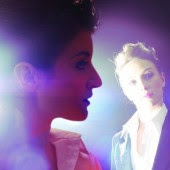 The Duke of Milan strides round the stage in a pair of be-ribboned PVC knee boots, his hands sheathed in fingerless black leather gloves. This is a Milan of flashbulbs and high fashion overseen by a Karl Lagerfeld-esque colossus, the kind a man who tweezes sushi into his mouth while barking at hapless underlings. Music pounds and bodies writhe and somewhere beneath the din and the flicker there is a trace of Shakespeare.

There’s a sense of disconnect to Matthew Dunster’s new production of The Two Gentlemen of Verona, a piece made in collaboration with RashDash. Dunster is clearly enamoured with the company – after seeing their work at the Edinburgh Fringe, he was determined to create something with them – but while many of their most appealing traits, their energy, their physicality, have made their way into this broad reworking of Shakespeare’s early comedy, so have some of the company’s limitations, the messiness of intention, and, chiefly, the way in which they knit together – or rather frequently fail to – the text with the choreography.

There were similar issues with RashDash’s previous pieces, Another Someone and Scary Gorgeous. The imaginative physical sequences always seemed to sit above and apart from the narrative – and the same is true here; only when working with an established text, rather than a piece of their own devising, it feels all the more marked.

The production is lively and bright, musical and colourful, but there’s often a sense that the words are secondary to the visuals. RashDash’s Abbi Greenland and Helen Goalen play, respectively, Julia, Proteus’ homely Veronese sweetheart, and Sylvia, the glamorous daughter of the Milanese Duke; while Julia flutters over her lover’s every letter, Sylvia is the pouting, strutting object of much male attention and fascination, a woman on a – literal – pedestal, with her near-naked image splashed across banners.

In comparison to the throb and debauchery of Milan, Verona is depicted as suburban and small fry, a town populated by beaming kids in well-pressed khakis; in the over-stretched opening scene, the titular two gentlemen brandish guitars and sing a peppy song about seeking fortune and freedom elsewhere. There’s wit and invention in such devices, but a lack of subtlety, the point is forced home, the comparisons are laboured. There are long periods given over to music and movement where no one speaks a word of verse, and there’s an adolescent quality to some of the humour, a seeming belief that all this cussing and snorting and stripping is more daring than it is.


Clemmie Sveaas plays Proteus’ inept servant, Launce, as an escapee from Ugly Betty toting a plastic lapdog in a designer handbag, but her scenes soon start to grate and this is before she ends up relieving herself in a plastic cup. By making this clownish secondary character female and by focusing the audience’s attentions firmly on Julia and Sylvia over the various gentlemen, the production seems to be tugging in an interesting direction, but this is neither a fully feminised or feminist account of the text and some of the choices seem to have been made for visual appeal rather than to make a particular point.

In fact there seems to be two conflicting desires at work here. On one hand it feels like an attempt to stage a frothy homage to the play, in the vein of Ten Things I Hate About You or Clueless, and in these moments the text feels like an obstacle. This is frustrating, as some of the more successful episodes come when the background noise subsides and the words are given room. This is most evident in the morally knotty final scenes when Sylvia is threatened with rape and then seemingly bartered; Dunster’s production plays up the sinister implications of this transaction, but then undoes the power of these closing moments by ending on a song and giving the women back their voices.
Reviewed for Exeunt
Posted by Interval Drinks at 10:02 AM