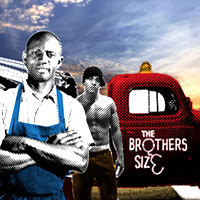 “Oh, she may be weary. And them young girls they do get weary…”

Oh, don’t they just. But, while I was in something of a melancholic slump when I arrived at the Young Vic last night, it soon lifted – their current production can’t help but lift you up. The Brothers Size by Tarell Alvin McCraney pulls elements of Yoruba myth into an American setting. In practice this results in one of the more vibrant, tingle-inducing things I’ve seen this year.

The production is simply staged, in-the-round (or, actually, in-the-square as the Whingers would no doubt point out), the audience seated around the four walls of the Young Vic’s Maria studio. There is no set. Just a black floor, onto which a circle is chalked in the opening minutes. A handful of red chalk is then thrown down into the same space and this then marks the actors’ clothes and skin as the evening progresses. There are no props either and the actors speak their stage directions as well as performing the actions. This sounds a little dry when described, but all these elements contribute to the distinctive rhythms of the play, its particular texture and flow. Ditto, the live musical accompaniment.

McCraney’s play concerns two brothers: Ogun and Oshoosi Size. Ogun, the eldest, is the solid, responsible and hard-working type, who has built up a successful auto-repair business. The younger Oshoosi is more flighty and easily-swayed. He has just been released from prison, so Ogun sets him up with a job in his shop, to Oshoosi’s initial displeasure. Their reunion is threatened by an ex-cell mate of Oshoosi’s, Elegba, who turns up with an old car to flog and something menacing in his demeanor.

The actors playing the brothers, Nyasha Hatendi as Ogun and Obi Abili as Oshooshi have a superb rapport, most overtly displayed when they launch into a wonderful duet of Otis Redding’s Try A Little Tenderness, singing and dancing – and doing air piano – along to the recording. It’s a brilliant moment.

Dreams too play a large part in the narrative – a dream state indicated by a red cross being shone through the chalk circle. But McCraney manages to blend these more stylised aspects with a story that truly hooks you; the brothers’ love for each other, their reliance on one another and the lengths they’d be willing to go for one another, are powerfully and movingly portrayed throughout. All this in an interval-less ninety minutes as well.
Posted by Interval Drinks at 6:57 AM

It may also be worth saying that if you're going to this play, allow an extra ten minutes for negotiating your way around the auditorium itself. Each of the four sides of seating is arranged on three or four different levels, often inaccessible from one another. Seating is usually unreserved, but on the press night places were set aside, and trying to get round to them was like playing three-dimensional chess. I spotted Natasha directly across from me,a and wanted to get over to hold what would have been our first real-world conversation, but the topography frustrated my best intentions. (Still, we finally met for proper at Some Kind Of Bliss this week.)

Good point. I entered through the upstairs entrance to the Maria studio and was turned away by the ushers because it was easier to go out and downstairs then to make my way across the auditorium itself.

And, yes, it was lovely to finally meet you Ian - in a non-online context that is.