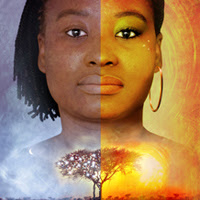 Right, there was going to be a lame intro here about the imminence of Christmas and how generally unprepared I am, but it was Not Very Interesting and has gone the way of the delete key. So instead I shall simply cut to the chase. Yesterday I was at the Young Vic to see both shows in their double bill of South African re-workings of familiar stories. First up, A Christmas Carol or Ikrismas Kherol if you will. This opens with one of the most visually striking sequences I’ve seen in a while; it made me jiggle in my seat with pleasure. Starting in darkness, a group of miners, guided by the torch beams of their helmets, stomp down from the galleries above the stage, and proceed to use chains and drums to replicate the cacophony of life in the mine. It’s unsubtle and rather batters the senses, but it works – works better than perhaps any other element of the show, where pesky things like narrative start getting in the way.

Scrooge is played by singer Pauline Malefane, a mezzo-soprano I believe, who won acclaim as Carmen a couple of years back. She is, in accordance with the story, visited by three ghosts. The first of these spirits is a lady in a prim white suit who shows Scrooge images of her impoverished childhood. These, in an interesting touch, are projected on to a white screen across the back of the stage, having been shot on digital video. They reveal that Scrooge’s mother died when she was a young age and that she had a sister who was forced into prostitution in order to support them both, who then also died. These scenes, filmed in the townships of South Africa, are played out in silence with the performers adding sound-effects, vocals and narration where necessary. They also provide a dramatic counterpoint to the show’s opening, where the workings of a gold mine were conjured so vibrantly; these video sequences have the opposite effect. What we see is ‘realer’ but also, conversely, more distant, less alive. The production devotes a good chunk of its running time to these videos as well, which I felt rather knocked it off balance.

Because this is A Christmas Carol, one cannot escape without a moral message being rammed home before the curtain falls (or, rather in the case of this show, before the upbeat percussive finale) but they just about managed to swing these scenes, using bundles of cloth to make the 'every three seconds a child dies of want and ignorance' line less hectoring than it might have been.

I also caught the second production, which will be playing in rep with A Christmas Carol, a version of Mozart’s The Magic Flute by the same company, with Malefane now playing the Queen of the Night. Now, opera remains one of my cultural blindspots, so I have no other productions to compare this to. But I enjoyed it a lot, everything was done with a degree of visual flair. I have no idea why there was a trio of ladies in lavender suits with angels’ wings but I know I liked it. And the children I could see in the front row were bouncing along happily rather than sullenly swinging their legs, a fairly good indicator of how well a show like this is working.

However, perhaps to invoke appropriately wintery feelings in the audience, it was absolutely freezing in the Young Vic for both performances. Take a coat - and be prepared to wear it.
Posted by Interval Drinks at 10:02 AM