Some Kind Of Bliss? 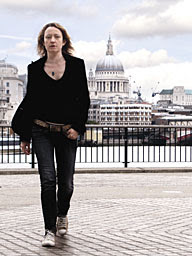 It’s been a particularly busy week, both theatre-wise and other stuff-wise - hence the gap in blogging.

Backtracking to Thursday night and I was at the Trafalgar Studios, the little downstairs one, to see Samuel Adamson’s new play, a one-woman show called Some Kind Of Bliss.

Adamson appears to be a bit of a contentious figure in the blogosphere, with many disliking his frothy and whimsical Southwark Fair with an intensity I never quite understood. However, while I quite enjoyed the latter – mainly as a result of Rory Kinnear’s endearing performance – I found his most recent work a frustratingly flimsy and tedious thing. A woman goes for a walk, that’s about the gist of it. She walks from London Bridge to Lulu’s house in Greenwich (she’s a celebrity lifestyle journalist for the Daily Mail), and during the course of this walk she has sex, gets mugged and steals an ice cream van – all things we know from the start, thanks to an overstuffed opening line: “Today - after I'd had the electric sex, got clobbered, killed the dog and parked the hijacked ice-cream van - I found the pop legend's house in Greenwich."

To her credit, Lucy Briers is highly watchable as Rachel, the woman in question, and there are a few sharp lines; but, really, how hard is it to get a laugh at the expense of the Daily Mail? The play shows an underlying love for London’s neglected corners that I found appealing, but whenever things promised to get interesting, Adamson undermined himself by driving the narrative off on odd, forced tangents, and I soon ceased to care about Rachel’s vague marital crisis.

The play did however allow me to meet Ian Shuttleworth in a non-online context for the first time, which was lovely, even if I failed to say one remotely interesting thing during our brief conversation.

This past week I also saw an appealingly dark slice of drama at the Tristan Bates Theatre, a small studio space off Shaftesbury Avenue – just over the road from the resurrected Fopp. They Have Oak Trees In North Carolina was a tense, well-acted ninety minute drama written by Sarah Wooley. Recent events have given it an unnerving topicality. It concerns a middle-aged married couple, whose young son disappeared over twenty years ago while they were on a family holiday in Florida – his body was never found, his story never resolved. Two decades on, an American man turns up on their doorstep, claiming to be the boy they lost. As I said, the play, a co-production with Theatre 503, is well written and strongly performed, but it’s given an inevitable, if unintended weight by events surrounding disappearance of Madeline McCann. It’s almost impossible to watch without thinking of where the McCanns will be some twenty years on from now, without wondering when and how – and if – their story will end.
Posted by Interval Drinks at 10:18 AM

Saw "Some Kind of Bliss" last night (am yet to blog a review of my own though) and agree with you - Lucy Briers is very watchable, but the play itself leaves somethign to be desired. Good idea, though

I shall look out for a write-up on your blog...