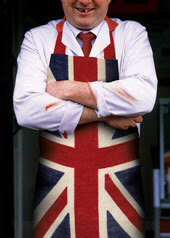 So. Then. Back in England. An England that appears not to have noticed that it is now well into the middle of spring and is busy hurling rain and hail and all manner of stuff in between down at the pavement – so it was with my winter coat buttoned high that I tube-and-bus-hopped my way to the Bush last night in order to see a play where (appropriately enough) Barking is underwater and Scotland is separated from England by Hadrian’s Channel.

Lucy Kirkwood’s debut play Tinderbox is set some time towards the end of the 21st century in a butcher’s shop in Bradford. The shop is run by the unpleasant Saul and his young wife Vanessa, a one time actress whose creative apex was a film by the title of Fellatio Nelson. Perchik, a fugitive and passport-less artist from Scotland arrives at their shop and is taken on as an assistant by Saul. It soon comes to light that Saul’s previous assistants have a tendency to have accidents that conveniently coincide with the arrival of a new batch of fresh meat in his under-stocked shop.

Josie Rourke’s production had an appropriately seedy feel to it but despite an abundance of bodies in sacks and much talk of maggots and flesh and digestion, I found parts of Bliss at the Royal Court far more unsettling and horrific. Though Joe Orton has been cited in most reviews what this kept reminding me of was an extended episode of The League Of Gentlemen. Very extended. It really did drag on. Two and a half hours, with interval. Initially it had a grubbily amusing quality with Kirkwood’s skewed vision of a flooded, brutal future coming through, but it soon lost direction, ambling on with the occasional comic volley of dialogue raising a laugh. Though Michael Billington wrote that it was refreshing to see a young writer “delivering a two-act play rather than opting for the comfort zone of 90 minutes,” its length really did work against it. The energy and excess needed to make something like this work could not be sustained over such a time and any points Kirkwood wanted to make about the besieged English and the retreat into nationalism were soon lost along the way as the play meandered towards its conclusion. The three main cast members were very good though, particularly the hugely likeable Sheridan Smith (from Little Shop Of Horrors and that Two Pints thing off the telly) as the deceptively dim Vanessa.

For this production, the Bush Theatre’s old L-shaped layout has been replaced with a small series of raked benches and a conventional stage complete with red curtains and a even a little glinty chandelier hanging from the ceiling. Like a West End theatre in miniature. It’s a potentially flexible space and presumably won’t always be arranged in this way; however the benches seemed to have been designed so that even the longer-legged audience members have a struggle to reach the floor – something that surely can’t have been intentional.
Posted by Interval Drinks at 9:43 AM