On The Face Of It 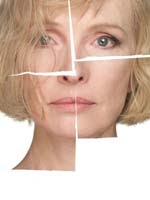 Whenever I suggest to my mother that she might like to accompany me to the theatre she always looks at me with a touch of anxiety in her eyes and asks: “how long is it?” It is only once she has been reassured that she can squeeze in a post-show drink and still be home in time for Newsnight, that she will then concede that, yes, she might quite like to come along.

This was the routine we went through when I mooted the idea of going to see Polly Stenham's That Face. And it was only once we'd established that it was a) less than ninety minutes long and b) that those minutes would not in any way feature Vanessa Redgrave talking about dead people (my mother was not overly enamoured with The Year Of Magical Thinking), that she tentatively agreed to the idea.

Written when she was just nineteen and originally staged in the Royal Court's 80-seat upstairs theatre, Stenham's play is about a supremely dyfunctional family. Actually dysfunctional doesn't come close to covering it. If there was a tick-list for how best to screw up your kids, every box would be filled in.

So we have a father who has run off to Hong Kong with a younger lover, leaving his former wife, Martha, to float around her bedroom in an increasingly grubby silk nightdress, swigging from a wine glass and indulging in disturbingly oedipal exchanges with her dutiful teenage son Henry. This boy is her world: she dotes on him, clings to him, calls him her 'little Russian soldier' and is fretful when he leaves her side. Her daughter Mia on the other hand, who is in trouble at her swish boarding school for dosing a classmate with Valium during a rather unpleasant initiation ritual, barely registers on Martha's radar.

Lindsay Duncan is as superb as everyone says as Martha, a woman blind to the fact that her behaviour is totally messing up her beloved son, while Matt Smith was also impressive as Henry. His was a difficult task, playing a character on the cusp of adulthood. The contrast between his taut toned physique and strange little-boy voice was striking and he even manages to pull off a scene where he has to have a complete emotional meltdown whilst wearing naught but a nightie and a string of pearls.

Though Stenham knows how to write scenes of emotional intensity, That Face is undoubtedly the work of a young person. Things frequently escalate to a hysterical pitch and the final scene is incredibly over the top. On more than one occasion it veered into Ab Fab territory, albeit with a more poignant edge, and if Joanna Lumley had floated in from the wings, hair bee-hived and ciggie in hand, it wouldn't have felt too out of place. The play did keep me gripped, despite the fact that I found these people – and their world of bitterness and privilege – so devoid of warmth, so unpleasant, that it was difficult to care overly about them. I know that's point: that Martha's extreme behaviour has left little room for normal human emotions, that damage begets damage, but I found the poisonousness of all concerned difficult to take. Again I suspect that is intended, but as a result I found the play easier to admire than enjoy.

That Face has been lauded in some corners perhaps more than is necessary, but it is still a taut, compelling piece of work. And my mother's verdict? "Not bad at all," which is actually pretty high praise by her standards.

Afterwards we headed for a nearby bar for the requisite post-play drink. Topics for discussion over said drink: Did Matt Smith have some sort of special wee-machine under his nightie or was he doing a Jane Horrocks? We presumed the former. Also, was the large, unkempt double bed that dominated Mike Britton’s set a visual reference to Tracey Emin’s bed? And were the increasing quantities of detritus, torn paper, clothes and whatnot, that Martha flung about the set a metaphor for the mess of the characters’ emotional landscapes? Or something. Maybe. Either way my mother, who abhors mess and who used to flinch in near physical pain if I so much as left a stray sock on the floor, was itching to get up there and have a good tidy. Lastly we both agreed that we were very, very glad indeed that neither of us had been to boarding school, as Stenham made it appear plausibly hellish.
Posted by Interval Drinks at 9:03 AM

Is your mother called "Phil" by any chance?

We like the sound of your mother very much indeed.

Not unless Phil is a short Serbian woman in his sixties!

But yes I suspect you'd get on very well. The face she made when I suggested she come with me to see some of the RSC Histories was priceless.

Who is Matt Snow? I thought his name was Matt Smith.

Yes, you're right, well spotted. I shall tweak that now.