The Menier Misses The Mark 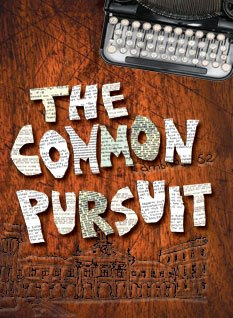 I was primed to like this. In common with many children of immigrants I have always had a fascination with certain English institutions and gobbled up films and novels with an Oxford or Cambridge setting as a teenager. But, despite my initial enthusiasm and despite the odd moment of poignancy, this production failed to particularly move or touch me.

Simon Gray’s The Common Pursuit, which the Menier Chocolate Factory are currently reviving in a break from staging musicals, begins in Cambridge of the 1960s. A group of students are in the process of setting up a literary magazine named after an essay collection by FR Leavis. They’re not a particularly likeable bunch but there is something appealing in their intellectual idealism, their desire to leave their mark. But, inevitably, as the years pass, compromises are made, standards are lowered, life weighs down on them – in terms of narrative we’ve been here many, many times before.

Fiona Laird’s production is a curiously blunt affair, slamming much of the subtlety out of the play, flattening it out. None of the actors really convince as students alive with creative energy in the opening scene, so, as they succumb to hack jobs at the BBC (a very Bad Thing indeed in the play’s narrow view of the world) or to extramarital liaisons at the Charing Cross Hotel with women whose names they can’t remember, there is some key thing missing, some necessary hook – it’s difficult to care that much about their various dramas and infidelities

From a performance point of view the production is very mixed bag. James Dreyfus, an actor whose appeal I’ve never really got before now, is very good indeed as Humphrey, the possibly brilliant poet whose self criticism is such he ends up unable to write, frozen, lost. He always stands a little apart from the others, keeping his distance, occasionally breaking in with a waspish comment, but drawing a line between himself and his friends. Reece Shearsmith’s Nick was rather disappointing, far broader in comparison and his various tics were very reminiscent, perhaps inevitably, of his League Of Gentlemen creations (though, in his favour, he was the only one who appeared to age in any noticeable way over the near twenty-year period that the play covers). As for Mary Stockley’s Marigold, the lover and then wife of the magazine’s editor, it’s difficult to judge her performance given how underwritten a part it is, she exists purely to provide a plot twist, a mistress in waiting.

I concede it may be an age thing but I really couldn’t grasp what it was about the production that moved Charles Spencer to tears. But having read the Guardian blog about Gray’s diaries, I suspect I may be making an Amazon purchase or two this weekend as I’ve not read them and they sound rather wonderful.
Posted by Interval Drinks at 5:49 AM

Any play set in a University during the seventies will have a resonance for those reviewers familiar with that life and those times - but for me, it always seems as dated and remote as an episode of Terry and June.

I went to see Simon Russell Beale in something at the Donmar a few years ago, mistakenly thinking it was a new play by Peter Schaeffer when in fact it was one of the first he ever wrote - set in a University during the seventies. It left me rather cold, despite SRB's best efforts.

I have got myself a copy of The Smoking Diaries and am really enjoying it. It's wonderful and funny in a way I can appreciate, whereas, as you say, the play felt remote and dated.

A friend of mine just saw the touring production of Quartermaine's Terms and came out feeling similarly underwhelmed.

If you are interested in finding out more about Simon's work as a whole (he wrote an enormous amount for theatre and in his diaries, but also for film, TV and radio) can I recommend www.simongray.org.uk, the newly-launched website about his career. Highlights include production histories for all his plays (inc. all productions of the common pursuit and Q's Terms), video clips and archive production photos, as well as audio clips of his diaries (which include 'an unnatural pursuit' his wonderfully dyspeptic diary of the orig. production of the Common Pursuit directed by Harold Pinter.) Well worth an extended viewing, all in all.