Deathtrap at the Noel Coward Theatre 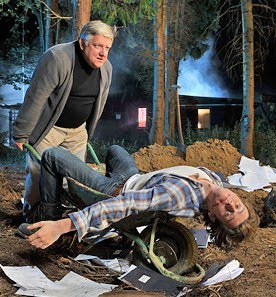 In order to generate publicity for his 1959 thriller The Tingler the film director William Castle is supposed to have installed buzzers under the seats of certain cinemas in which the film was playing in order to give his audience a rather literal jolt.

From the way the women in front of me leapt into the air during a key moment in Matthew Warchus’ revival of Ira Levin’s 1978 comedy thriller, Deathtrap, it looked a lot like Castle had been tinkering with their chairs.

For the most part Warchus’ production is a slick and solid revival of a play that doesn't quite make the case for all the love that has been lavished on it. There are a couple of proper shocks but there’s also a constant flow of self-reference, which is amusing at first but becomes a little tedious towards the end.

The play begins with faded playwright Sidney Bruhl receiving a manuscript in the post from a former student. Bruhl hasn’t had a hit in years and has been living off his wife’s money so this play, a well-constructed, marketable “five-character, two-act thriller with laughs in all the right places,” is the kind of thing he might literally kill for. He invites the young writer to his Connecticut cottage to talk things through as his increasingly nervous wife, Myra, watches on, worried about what her husband might be driven to do.

The story that follows is stuffed with twists and bluffs and double crosses. Part of the joy comes in the element of surprise, in not seeing these turns and lurches coming (the programme urges the audience not to give things away and spoil it for others), so it’s difficult to discuss the plot further without divulging too much.

Levin’s play doubles as a pastiche of the genre it inhabits and the characters are forever pointing out how what’s happening would make a good play. In fact in the second act, one of them begins to write that very play, adding to the already thick layer of self-reference. The first half is rather talky and slow to get going but, once it’s been established that nothing is quite what it initially appears, Warchus maintains an admirably high level of tension (that fact that Bruhl’s home is strewn with weapons, theatrical souvenirs and antique finds, helps considerably in this regard).

Though it’s probably fair to assume that the meta elements of Levin’s play felt fresher when it was first staged, the constant commenting on its own structure, which begins as a fairly witty conceit, soon becomes an overused device, one that acknowledges but doesn’t compensate for the occasional weaknesses of the writing; it sometimes feels as if the play is not so much winking at the audience as winking at itself in a mirror just over their shoulder.

That said, Simon Russell Beale is predictably delightful as Bruhl; his timing is impeccable, each gesture and glance well-judged, and he gives the character a surprising level of emotional complexity, one perhaps not supplied by the writing. Glee’s Jonathan Groff is able enough as the young playwright, Clifford, respectful and eager but also clearly ambitious. Claire Skinner however seems ill at ease as Myra, her accent wavering, and Estelle Parsons casts asides any notion of nuance in her cameo as the psychic Swede, Helga ten Dorp.

Rob Howell’s beamed barn-like set is impressive and full of shadows, an effect heightened during the inevitable climactic thunderstorm. But though the production as a whole is undemanding and fun, it can feel a bit overstretched and at times a bit self-satisfied; its entertaining nature however helps override some of these niggles.

Reviewed for musicOMH
Posted by Interval Drinks at 6:02 AM

I hope it’s OK to write. I’m in the cast of a UK tour of Dracula that’s coming to London (Here’s out Facebook page http://www.facebook.com/event.php?eid=150157621672003&ref=ts & the Website www.selladoor.com)
We’d love for you to come and review it. I used to write a blog (Actress in the City) and love reading your site!!!
Our official Press night is Thursday 7th October at the Palace Theatre Kilamarnock and London Press Night takes place on Thursday 11th November at the Greenwich Playhouse. We’d be happy to sort you out with Comps and any photo’s, images, interviews (we’re even working on a trailer) you should like.
My e-mail address is sophielholland@yahoo.co.uk or you can contact our producer/ director direct on d.hutchinson@live.co.uk or 07754 71 36 82.

Thanks for getting in touch Sophie. I already have the press release for this and I've seen something of Sell a Door's work in Edinburgh