Pieces of Vincent at the Arcola 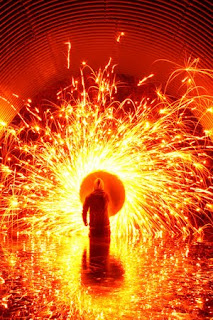 David Watson’s new play is one of fragments. Like Cornelia Parker’s exploding shed it is a thing of disarray, its pieces flung to the four corners of the room.

The play takes the form of four seemingly unconnected strands. A music teacher harbours strong feelings for his young student. A woman deals with an emotional appeal from her drifter of an ex. Two Birmingham lads discuss their discontent over a box of fried chicken. An Irish police officer goes to deliver bad news and ends up revisiting his own past.

Es Devlin’s design has an inside-out quality: the audience is seated on cushions in the middle of the theatre and the action plays out around them. This necessitates a degree of swiveling in order to follow the scene changes as the actors perform behind gauzy screens onto which film is also projected. These projections are initially compelling, placing the audience in the back seat of a car or in a park watching children cycle past, but director Clare Lizzimore never completely integrates the technically inventive aspects of the production with the play itself.

The design does initially heighten the fragmented nature of the play, the disruption and scattering caused by a single random yet devastating event, but there is often an underlying sense of squabble between the writing and the method of presentation. This is particularly true of a visually striking sequence set on the Millennium Bridge, where the time-delayed footage overwhelms the words spoken. And from a purely practical perspective there are some real problems with sightlines (a number of people sitting in the corner closest to the theatre’s entrance had to stand on more than one occasion in order to see what was going on).

The performances are however strong throughout, particularly that of Sian Clifford (who also did great work in the Arcola’s recent production of The Road to Mecca) as Rachel, a woman coping with the unexpected return and then the equally sudden loss of her boyfriend, Vincent, and from Kevin McMonagle as John, the policeman shadowed by his own grief. Adam Best’s Vincent gets a little lost in comparison, though this is as more to do with the way the role is written than with his performance.

In Watson’s previous play, Flight Path, the older characters felt the least well-developed but here the opposite is true. Robin Soans’ music teacher is an intriguing and enigmatic character and Vincent’s grandmother, superbly played Dearbhla Molloy, comes fully to life in her one brief scene. The inclusion of the character of the young terrorist almost seems like an afterthought in comparison and Watson’s final twist feels both abrupt and unnecessary; the play is actually stronger when it’s more opaque and less willing to explain itself.
Posted by Interval Drinks at 9:22 AM

I agree with practically every thing in here. Sian Clifford is emerging as a real talent to watch isn't she, and I was outraged that Molloy only got the one scene!

And it's odd about that scene on the Millenium Bridge, I loved it at the time, but when I read the playtext on the bus on the way home, I was a bit like 'oh that's what she said...', I did find it very effectively done though.

Thanks. I found the early scene with the car quite effective but the Millennium Bridge scene, while striking, just didn't hold together as well.

I liked the idea of being sat in the centre of things very much and can see why they chose to stage things that way even if it didn't quite come off - I was very aware that the people sat (and eventually stood) behind me couldn't see a lot of what was going on.