How to be an Other Woman at the Gate 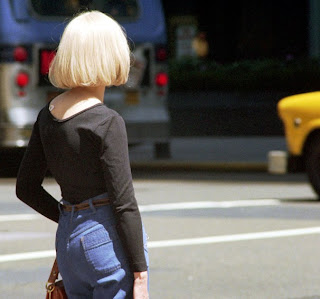 Based on a short story from Lorrie Moore’s collection, Self Help, Natalie Abrahami’s production is atmospheric, inventive and full of the language of film and fantasy.

The original story was written as a set of wry instructions and Abrahami retains that device. The ‘you’ of the narrative is Charlene, a twentysomething New Yorker working in an unsatisfying job as a secretary who falls for a man who does not reveal he is married until the requisite number of dates has taken place (“four movies, three concerts, and two-and-a-half museums”) and they are lying in bed together.

By having four actresses play the character of Charlene the production emphasises the distance inherent in Moore’s second person prose. Charlene is both an individual and an everywoman, an archetype. This is heightened by the fact that the performers are all dressed in the black-skirt-and-white-shirt combo of retail assistants, glossy and anonymous, the uniform of transaction; one by one they take Charlene’s expensive beige raincoat and slide their arms into the sleeves, getting a feel of this new skin, grown women playing dress-up. The man, the lover, remains equally familiar yet also absent, a construction, plucked from the pages of a magazine or from the cinema screen, with his scarf draped over his shoulders and his eyes permanently shaded by his trilby. Again the four actresses take turns to play him with Cath Whitefield making the most convincing transition, capturing the stance and manner of this cut-out lover.

Where the production really excels is in its evocation of a particular mid-80s atmosphere. Samal Blak’s simple but versatile set is all black and chrome with an array of high-heeled shoes dotted around the stage that alternatively stand in for lamps, telephones and ashtrays. The lighting is low and smoky and the chosen music (as ever at the Gate) is spot on. The soundtrack is a smooth succession of synth and sax, Sade and Sheena Easton; the choreography meanwhile veers from the slinky and erotic to the comic, the New Year’s Eve nightclub scene a strong example of the latter.

While Abrahami’s production is stylish, well-crafted and filled with little moments of charm and wit, it sometimes dilutes the crispness of the source story and there is always a slight underlying sense that it is wearing a coat that it’s not quite comfortable in.

Reviewed for musicOMH
Posted by Interval Drinks at 5:35 AM