And I and Silence at the Finborough Theatre 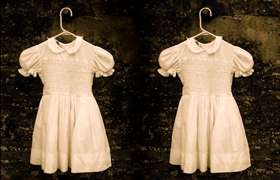 Confinement comes in many forms. The windows don’t have to have bars; lack of opportunity, lack of money and food, lack of hope: these will do the job just fine.

Naomi Wallace’s new play, And I and Silence, hops back and forth over a period of nine years in 1950s America. Dee and Jamie, two young women, one white and one black, meet in prison and become close. Together they make plans for their future. They don’t hope for much: a job they can hold onto, a room they can share, the chance to walk through the city arm in arm and drink ice-cold soda. Their dreams are small but even so they are to prove incompatible with the realities of the segregated world outside their cell.

The women rehearse together for the roles they will need to play to get by: the good servant, dedicated, capable, graceful and uncomplaining. They practice polishing invisible silver, dusting invisible shelves. They remind each other there is a line that must never be crossed, there are things they must never succumb to and there are times when the only choice left to them will be to run, though even then they must always take care never to forget their bucket and brush.

By having different performers play the characters’ older and younger selves, Caitlin McLeod’s production highlights how much the hard passing of time has shaped and changed them: the optimism of old has been dulled and something vital and bright has been drained away. While both women knew well the taste of hardship – it brought them to prison in the first place – it had not broken them; it takes a constant pattern of let downs and disappointments, an ever empty stomach, and the knowledge that even on the outside they can never really be free, to tip them over.

Produced in association with Clean Break, a company whose work explores the experiences of women in the criminal justice system, Wallace’s play has a transcendent quality; its reach stretches beyond its setting. In some ways the play has parallels in Chloe Moss’ This Wide Night (also written for Clean Break), a contemporary account of two women trying to reshape their lives on the outside and doing what they must in order to survive.

Wallace’s approach is more lyrical; her language has heat and rhythm and occasionally the dialogue is rhymed, something which is initially jarring but quickly becomes part of the play’s particular texture. It has an elegance of structure, alternating scenes of the past and present, and uniting the two threads only at the end in a moment of potent circularity. There’s a more general resonance in the way the characters rehearse their actions and behaviour, learning their lines by rote, perfecting each scene.

The performances are strong on all sides, managing to convey both a sense of unity as well as the crucial one of difference, a wearing down and wearing out. Cat Simmons and Cherrelle Skeete play the two faces of Jamie, the former a little less buoyant than the latter, her spirit slowly sapped. There’s a more overt gulf between Lauren Crace’s bright-eyed and impulsive young Dee, a woman who’ll exact gleeful revenge on a cruel prison guard even it means weeks in the hole, and Sally Oliver as the same character nine years on, still given to impulse but with some central spark starting to fade.

McLeod’s production – set in one room that, appropriately, doubles as both their cell and the sparse, cell-like place the characters end up in – has some issues with the tonal differentiation of scenes, particularly at the beginning, but as the split between what the women hope for and the harsh reality that overtakes them becomes ever wider, the piece becomes stronger, building to a bleakly inevitable – if slightly overwrought - but still moving conclusion.
Reviewed for Exeunt
Posted by Interval Drinks at 7:14 AM