The School for Scandal at the Barbican 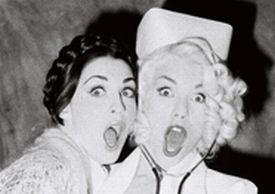 Deborah Warner’s production of Richard Brinsley Sheridan’s delicious comedy is a shouter. As the audience make their way into the auditorium the soundtrack is already pounding while a number of cast members strut across the stage as if on a catwalk wearing blue steel stares, Hoxton specs and man-bags along with their knee breeches and crinolines; occasionally someone in a technician’s headset and a Barbican BITE T-shirt throws a few shapes.

If you saw Warner’s production of Mother Courage at the National, you’ll recognise this stylistic landscape. Scene titles unfurl on banners or are held up on cards, the flats are intentionally flimsy and rough drawn, and there is no attempt to disguise the rumble and clank of props being assembled. The whole thing is thick with anachronism, the 18thcentury violently colliding with the 21st: there are Vivienne Westwood shopping bags, bottles of Bombay Sapphire and a whiff of urban decay. There’s something very modern in libertine Charles Surface’s debauchery; he glugs from a jug of Burgundy while sporting fashionably ratty jeans and an Indian headdress, his associates and hangers on slumped and sozzled around him.

Some of these anachronistic flourishes are inspired – particularly when Charles slakes a hangover with a can of full fat Coca Cola and something greasy and possibly from Greggs or when a vital piece of gossip is confirmed via iPhone – but sometimes it feels like Warner has taken one of those banners of hers, scrawled This Is The Concept on it in fat marker pen letters and is waving it in your face.

All that said, the exuberance of the production is seductive, compelling even, and the rapidity of Sheridan’s wit is only occasionally dampened by the racket. The principle joys come from the performances. Amid all the noise Alan Howard gives an elegant and understated performance as Sir Peter Teazle, grumbling, dogged, with an air of being permanently put upon: “was ever a man so crossed as I am?” He is well paired with Katherine Parkinson – whose delivery, as ever, is superbly measured – as his wayward and (much) younger wife. Though her character has succumbed to all the trappings of life as a lady of fashion, she is not without a heart and somewhere beneath all the snapping and sparring of the couple’s “daily jangle” they manage to suggest a degree of real affection.

Leo Bill is suitably nervy and spaced as the rakish wastrel Charles, yet beneath his array of twitches he suggests the existence of some small nugget of inner decency, however eroded. Aidan McArdle, as Joseph, the other Surface brother, a noted man of sentiment, conveys a strong sense of superficial moral solidity whilst suggesting a lack of any real resolve; at one point he is even seen enjoying some 18th century porn. This is a production particularly interested in the things underneath, the padding and girdles – and, in one case, a pair of Superman underpants – beneath the mile wide dresses and towering wigs.

The broader ensemble seems to have been differently instructed; here are performances dialled up to eleven, all snivelling and screeching, pratfalls and harsh caricature. This results in some over the top mugging but also, with the character of Moses the Jewish moneylender (played with an extravagant lisp by Adam Gillen), it presents something more testing as Warner looks the play’s anti-Semitism in the face and doesn’t attempt to pull back or soften it any way.

Sheridan’s play, with its strong distaste for hypocrisy and the pedlars of slander, remains a joyous thing to behold and Warner is faithful to its spirit; despite the 21st century visual vocabulary, she lets the play speak for itself. This is theatre as event – over three hours long and big, big, big – and it’s nothing if not memorable in its own bludgeoning way.

Reviewed for Exeunt
Posted by Interval Drinks at 2:42 AM