I am a Camera at the Rosemary Branch Theatre 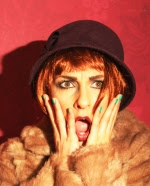 According to Christopher Isherwood’s entertainingly candid memoir Christopher and his Kind, written in the 1970s and recently filmed in all its sweaty bedroom detail by the BBC, the character of Sally Bowles was based, in part at least, on his friend Jean Ross (the surname he appropriated from a pre-literary fame Paul Bowles). But by the time Isherwood got around to this further act of ‘fixing’ there were already numerous versions of Sally out there, both on film and on stage.

John van Druten’s 1951 play, I Am a Camera, which would in turn inspire the Kander and Ebb musical Cabaret, is based on Isherwood’s Goodbye to Berlin, particularly the Sally Bowles section (which had been originally published as a stand-alone volume by the Hogarth Press) though it also contains bits and pieces from The Landauers.

Fittingly the whole thing takes place in Christopher’s rented room where he agonises over his typewriter, craving distraction, “waiting for something to happen”; the social turmoil of 1930s Germany is a reality but – initially at least – a rather distant one. Christopher and Sally find numerous excuses for drinking, socialising and generally enjoying all that nocturnal Berlin has to offer; occasionally, in an effort to make some money, he gives English lessons to Natalia, the daughter of a wealthy Jewish department store owner.

Mark Jackson’s performance is nicely judged; he is wry, laconic, a trifle prim, given to hypochondria, and the perfect foil for Vicki Campbell’s Sally Bowles. She arrives in a predictable blur of peacock feathers and green nail varnish, but rapidly wraps herself in the role, making it her own – no easy thing. There’s something incredibly open about her performance; she’s voluble and physical, knocking back prairie oysters and warm champagne as if each drink might be her last, but when reality punctures this whirlwind world of theirs, she crumbles in a most dramatic fashion. Her eyes brim with tears, her mascara threatens to run in black rivers down her cheeks; she blubs and gulps like a child.

They make a well-matched pair. He is (relatively) reserved, she is all energy and display, self-involved and prone to hymning her own self-perceived quirkiness – as she tells Christopher on their first meeting, “I think I’m rather a strange and extraordinary person” – and yet she gets away with it. As Campbell so well conveys, there is also something vulnerable about her, a huggable quality that stops her from being utterly unbearable.

They’re supported by a strong and cohesive ensemble cast. Erika Poole is suitably amiable and quasi-maternal as Frau Schroeder, Herr Issyvoo’s landlady, which makes her parroting of the Nazi party line about the Jews even more jarring. Natalie Ball is composed and somewhat intense as Natalia, a woman who has the rug pulled out from under her by emotions she had not expected to feel and does not know how to process.

Though Amy Yardley’s set design, with its bold white slogans – the writing literally on the wall – leaves the audience no escape from what is occurring in the outside world, yet it takes a while for these events to infiltrate Christopher and Sally’s bubble; when they do, it’s a jolt, a cold, hard slap.

There’s more sentiment in van Druten’s play than in Isherwood’s novels and it has a circular, narrative neatness that the stories themselves lack. The Christopher of the play is also never quite as passive and disinterested as the famous line – “I am a camera with its shutter open” – implies; he expresses hurt and anger and he grapples with a growing sense of distaste at the things he hears and sees.

Despite limitations of space, Owen Calvert-Lyons’ production is a richly textured piece that impresses on many levels, as a homage to the writer in the anniversary of his death and a potent evocation of Isherwood’s Berlin world.

Reviewed for Exeunt
Posted by Interval Drinks at 5:08 AM