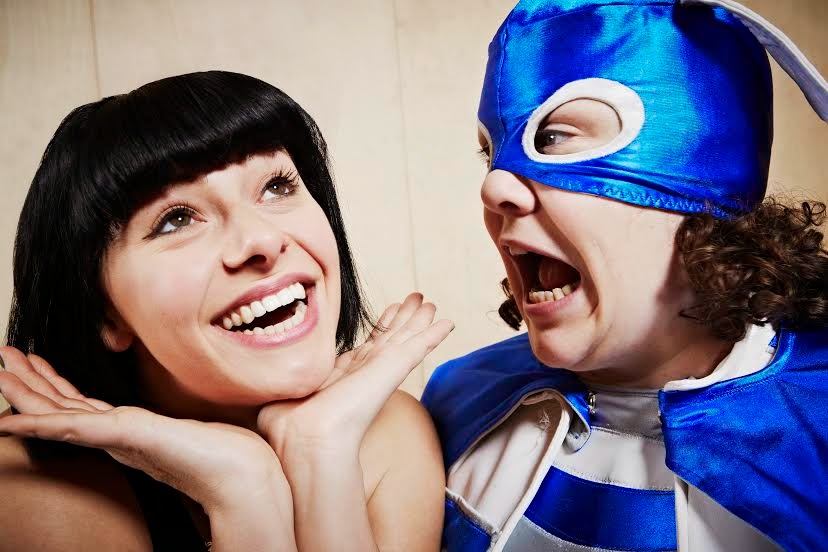 One of Jess Thom’s friends once described her Tourettes Syndrome as a “crazy language generating machine” and that’s pretty much the perfect encapsulation for the neurological condition which causes a range of involuntary verbal and motor tics, and makes her say the word ‘biscuit’ anything up to 16,000 times a day. In addition to all those ‘biscuits,’ common tics include ‘hedgehog,’ ‘cats’, and ‘hello’, as well as a wide range of expletives – though as she points out only a small percentage of people with Tourettes have swearing tics, she just happens to be one of them.

Her show is designed to explore what it is to have Tourettes, how the tics affect her day to day life and how isolating it can be at times but also to celebrate the creative energy of them, their playful poetic quality. She’s assisted in this task by ‘Chopin’, the show’s co-creator who’s there to help keep her at least vaguely on script, but who also serves as a verbal dancing partner, improvising and riffing on Jess’s more surreal outpourings. On the day I saw it, one of the audience members also had Tourettes so there was a further unpredictable element in the room which added to the experience.

The show as a whole is insightful and engaging, demonstrating how normal tasks like making a cup of tea can be pretty tricky if you have a tic-driven tendency to hit yourself in the face, but it also genuinely makes you think about spontaneity, imagination and the creative process. There’s a wonderful linguistic richness to her tics. Between the biscuits she will suddenly come out with a “trigonometry anthrax” or a “Keith Chegwin is dead” or some “Roman Catholic sheepdogs.” Chopin’s mother’s tits are a frequent subject of analysis. And sometimes she’ll launch into an absurdist word-wave, an insta-poem of surreal magnificence. I was reminded of Oliver Sacks’ essay, dated now but still fascinating, about Witty, Ticcy Ray who relished his wild, Tourettic energy and channelled it into music.

Thom’s tics are often very funny and at the start she ensures the audience they are welcome to laugh at them, but they also allow her to view the world and there’s a lovely moment where she describes the way her tics latch onto things that she might otherwise miss, that they make her more aware of the beauty of the world around her, the changing seasons. She talks about her tics as if they have their own force of personality, a kind of co-habitation; her tics are excited by squeaky noises, they have a mischievous quality.

She also uses the show to make a serious point about the arts and accessibility. Her tics have in the past made visiting the theatre difficult and she was once asked to sit in a screened-off sound booth to avoid disrupting a performance, an event she found deeply humiliating. Theatre needs to be more inventive in the way it deals with this, instead of issuing finger-wagging charters, it should be look at finding models that include and welcome everyone. Thom’s been trying to see more shows while she’s in Edinburgh – she writes about the experience in more detail here – and she happened to be in the audience of the Secret Theatre company’s A Series of Increasingly Impossible Acts on the night I went to see it, a show which was able to fold her tics into its own flow in a really exciting way and included a particularly beautifully timed deployment of the word “Nando’s.” I also think, in a strange way, Thom’s show would be a great one to see following Ross Sutherland’s brilliant Standby for Tape Back-Up, because in a way there’s a degree of overlap in the way they explore patterning and language and the place where poetry comes from. He doesn’t end on a song about animal sex though.

It would have been interesting to see more made of the backdrop – a collage of objects inspired by Jess’s tics including a highly unsettling Babygro – to see more interplay between the visual and the verbal, but the verbal is pretty thrilling in its own right.

All this, and you get a biscuit.

Reviewed for Exeunt
Posted by Interval Drinks at 5:59 AM