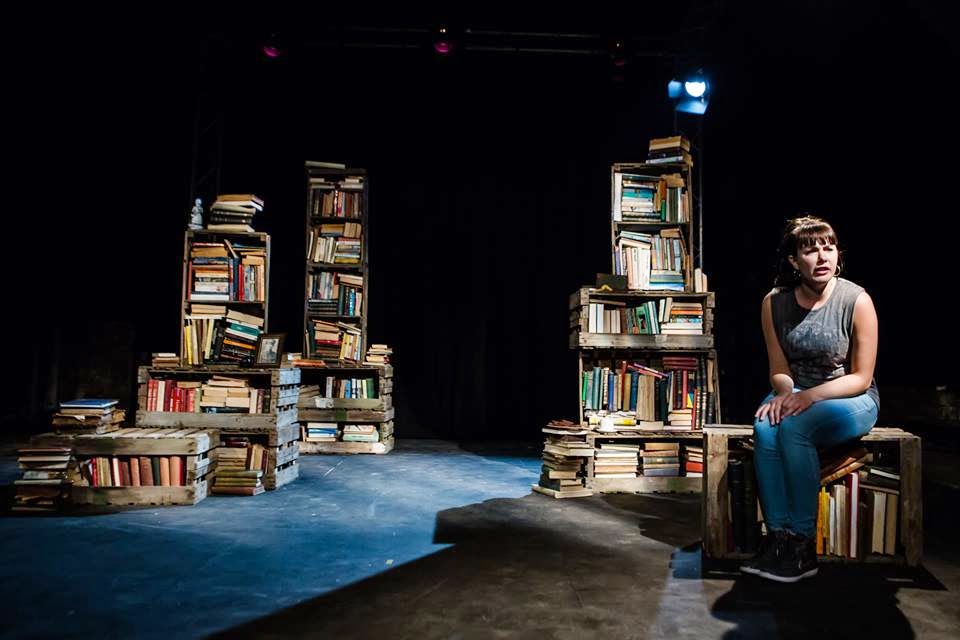 The stage is book-thick, book-rich, beautifully book-full. Rosie Wyatt stands in the middle of this sea of shelves. Her character, Amy, has a right mouth on her. Once the words start they don’t stop. Her story is one of an unlikely friendship. Amy admits that she can be quite handful and her past behaviour -robbing houses, getting sacked from her job in a hairdresser after a spectacular outburst – has resulted in both her friends and family turning away from her. It’s at her lowest, loneliest point that she meets the woman she calls Mrs Glenda, a frail old lady in pop socks who lives in a vast Victorian house stuffed full of the books that she liberated from a library after the council decided to close it down.

Clara Brennan’s monologue, initially performed in a shorter version as part of Theatre Uncut, is full of energy; there’s anger in there but also uplift. It takes what could have been a predictable set up, what is in fact a slightly predictable set up – the education of a wayward young girl by a wise old woman whose health is fading – and turns it into something truly moving and optimistic and heartfelt. While there’s a lot to enjoy about the writing, in the way it blends the political and personal, its undercurrent of radicalism, Wyatt’s performance is also a joy; she’s full of adolescent urgency, taut with it – there’s no let up, it’s like she absolutely has to share her story with you, right here, right now, she has no choice in the matter, she needs you to hear this. Wyatt knows how to handle a monologue, how to hook an audience; she was captivating in Jack Thorne’s Bunny back in 2010 and here she plays a similarly outwardly confident young woman who beneath her mouth and bluster is quite vulnerable. The intensity of her delivery here is a little exhausting but the approach pays off and by the end both Wyatt and a large proportion of the audience are welling up.

Brennan’s play is a hymn to the written word, to the beauty of books and the power they contain within their pages, as well as to the necessity of protecting this power and making sure future generations have access to it. It’s also about community, about the need to listen to one another, to talk to one another, the things that can be achieved if people join together. Though never preachy this is a play with a message.

Directed by Bethany Pitts, the production can feel a bit one-note at times, a bit relentless. There’s no pause, no respite, but by the end as Amy starts to contemplate her legacy and to appreciate the importance of what has been passed on to her, the warmth and sincerity of the piece and Wyatt’s giddy, galloping performance come together to create something moving and memorable.

Reviewed for Exeunt
Posted by Interval Drinks at 6:03 AM